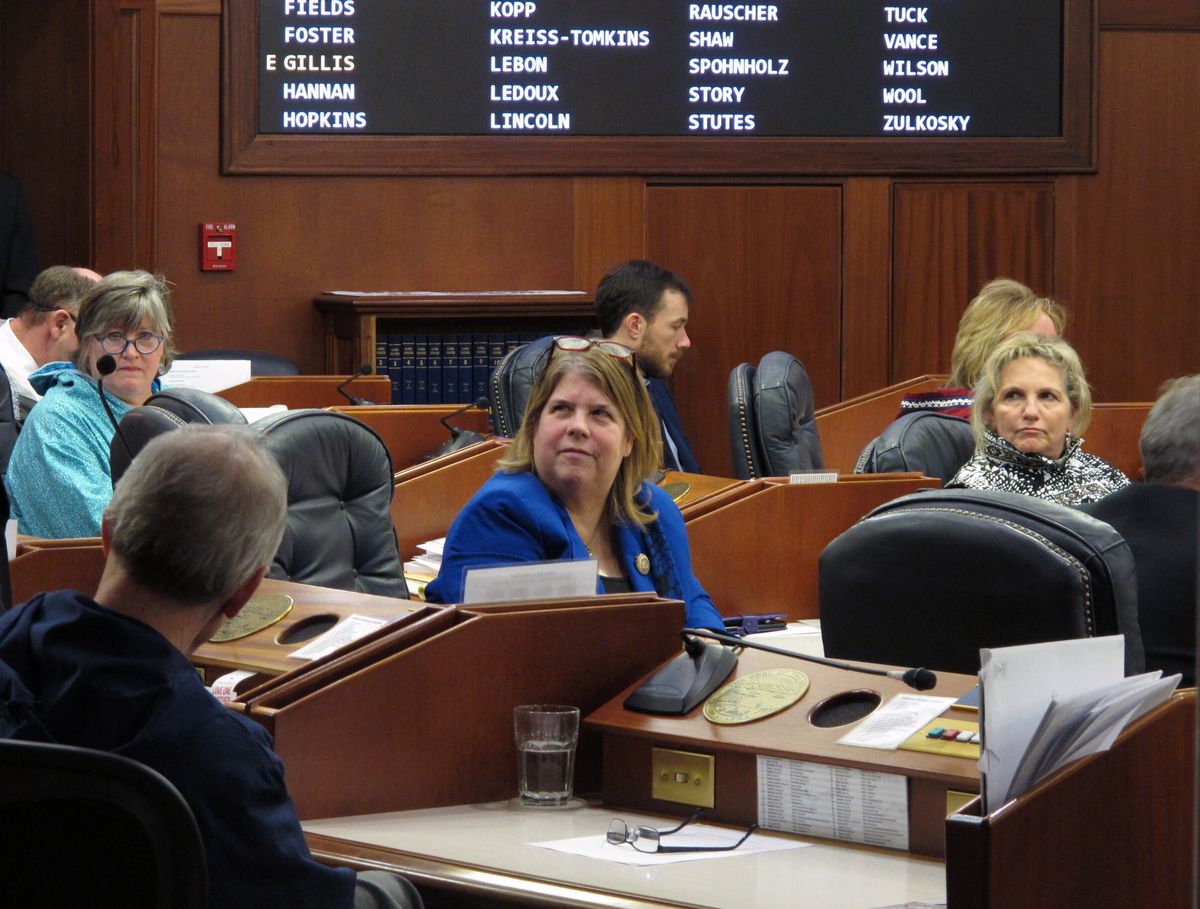 Former state Rep. Tammie Wilson, center, listens as a colleague speaks about her after she announced her resignation on Friday, Jan. 24, 2020, in Juneau. (AP Photo/Becky Bohrer)

Former state Rep. Tammie Wilson, center, listens as a colleague speaks about her after she announced her resignation on Friday, Jan. 24, 2020, in Juneau. (AP Photo/Becky Bohrer)

JUNEAU — The Alaska Department of Health and Social Services is retracting an official statement that appeared to imply it violated the Alaska Constitution when hiring former state Rep. Tammie Wilson. On Thursday, the department provided a memo from Alaska Attorney General Kevin Clarkson saying the hiring was legal.

At the time of Wilson’s resignation, a written announcement from the Department of Health and Social Services said she had already been hired and that the department “developed a policy advisor role in the DHSS Commissioner’s office” for her.

If either statement had been true, Wilson and the department would have violated the constitution.

Department communications director Clinton Bennett said in a Thursday email that “I ... got ahead of myself and the official paperwork that needs to be completed before a person becomes an employee of the State of Alaska.”

He later added, “It is noted that better wording could have been used to describe this position.”

Bennett did not immediately reply to a followup question asking whether his original message had been approved by the department’s commissioner.

Bennett’s statement Thursday appears to be backed up by the results of a public records request by the Anchorage Daily News. Asked after Wilson’s resignation for a copy of her employment documentation, the Department of Health and Social Services said Jan. 27 that no such documents existed at that time. Another records request was filed Thursday.

Alaska’s constitution prohibits the state from hiring a legislator for a “position of profit which has been created, or the salary or emoluments of which have been increased, while he was a member (of the Legislature).”

That prohibition applies “during the term for which elected and for one year thereafter,” but Wilson announced her resignation Jan. 24, said it was effective the following day, and started her new job 10 days later.

To satisfy the constitutional prohibition, Wilson would have to go to a job that already existed, and that job could not have had a salary increase since Wilson’s last re-election.

According to budget documents, that happened here. Wilson’s current position was created in 2009, and last year, the salary for the job was to be $96,360 per year, plus benefits. The latest documents indicate a salary of $87,751, plus fewer benefits than before. A message from the department says Wilson will be paid $86,400 per year, lower still.

Andrée McLeod is an Anchorage activist who in 2010 uncovered two cases where lawmakers improperly took state jobs. Both subsequently resigned.

She has been monitoring this case as well and said Alaskans should be paying attention.

“I think most Alaskans expect their public officials to follow the laws, not find ways to get around them,” she said.

She said she was particularly alarmed by the fact that hours before her announcement, Wilson voted against overturning some budget vetoes signed by Gov. Mike Dunleavy. (Wilson also voted against a veto override last summer.)

There’s a clear conflict of interest, McLeod said, when a legislator votes right before announcing she intends to take a state job.

Reached by cellphone, Wilson said there were “no talks and stuff going on during session,” and that the administration had mentioned the possibility of a position the previous summer, when it said it intended to reform the operations of the Office of Children’s Services, a particular target of Wilson’s ire over the past several years.

The legal interpretation released Thursday by the administration is dated after Wilson’s resignation, but Wilson said she consulted with the Department of Law herself before her announcement. Asked for a copy of that advice, she said she would double-check the legality of releasing it. She did not respond to followup calls Thursday afternoon.

Wilson’s replacement in the Legislature has yet to be named. When asked for the names of those who have applied for the vacancy, Hank Bartos, chairman of the House District 3 Republicans, said, “The Party is not letting us release those at this time.”

Ann Brown, vice-chair of the Alaska Republican Party, said that after the district conducts interviews Friday and selects a short list of nominees, those names will be released. Dunleavy has until Feb. 24 to name a replacement, who must be confirmed by fellow House Republicans before serving.

Thursday’s message from Clinton Bennett in full below:

Many of you have expressed interest and shared questions about Tammie Wilson and her role with the Alaska Department of Health and Social Services (DHSS). I thought we would be able to set up a media availability on this topic, but with an already busy session underway and the novel coronavirus occupying the majority of my time, we will not be able to make it happen.

DHSS has provided (attached) some documents on this topic and many of your questions can be answered by these documents. Included with the documents is the legal opinion from Attorney General Kevin Clarkson on this topic. For your convenience I have written out some of the questions and answers below.

Question: What does PCN stand for?

Position Description: To serve as primary aide to the DHSS Commissioner, Deputy Commissioner and Assistant Commissioners within the Department of Health and Social Services and play a direct role in the management of business activities and the accomplishment of department goals and objectives. This position acts as a liaison between executive leadership and staff, divisions, other departments, stakeholders and the public in a variety of capacities.

Question: Why are the two titles different?

Question: Why did the press statement sent out on January 24, 2020 say “DHSS hires Tammie Wilson…” when she wasn’t hired on or before that date?

Answer: DHSS had talked to Tammie Wilson about the job opportunity and felt there was a mutual interest in the position. But at the time of the press statement, no paperwork had been signed by Wilson. I (Clinton Bennett, Communications Director) got ahead of myself and the official paperwork that needs to be completed before a person becomes an employee of the State of Alaska.

Question: Why does the press release say “… developed a policy advisor role in the DHSS Commissioner’s office;” when the position was already established in 2009?

Answer: The position was already established in 2009, but the idea of some of the specific potential job duties for the position were developed for this policy advisor role. It is noted that better wording could have been used to describe this position.

Finally, I personally want to thank you all for your patience with receiving this information. DHSS was, and continues, to be occupied by the rapidly-evolving outbreak of the novel coronavirus (2019-nCoV), and that continues to occupy my time. Here are some helpful links below to make sure you are updated on the novel coronavirus.