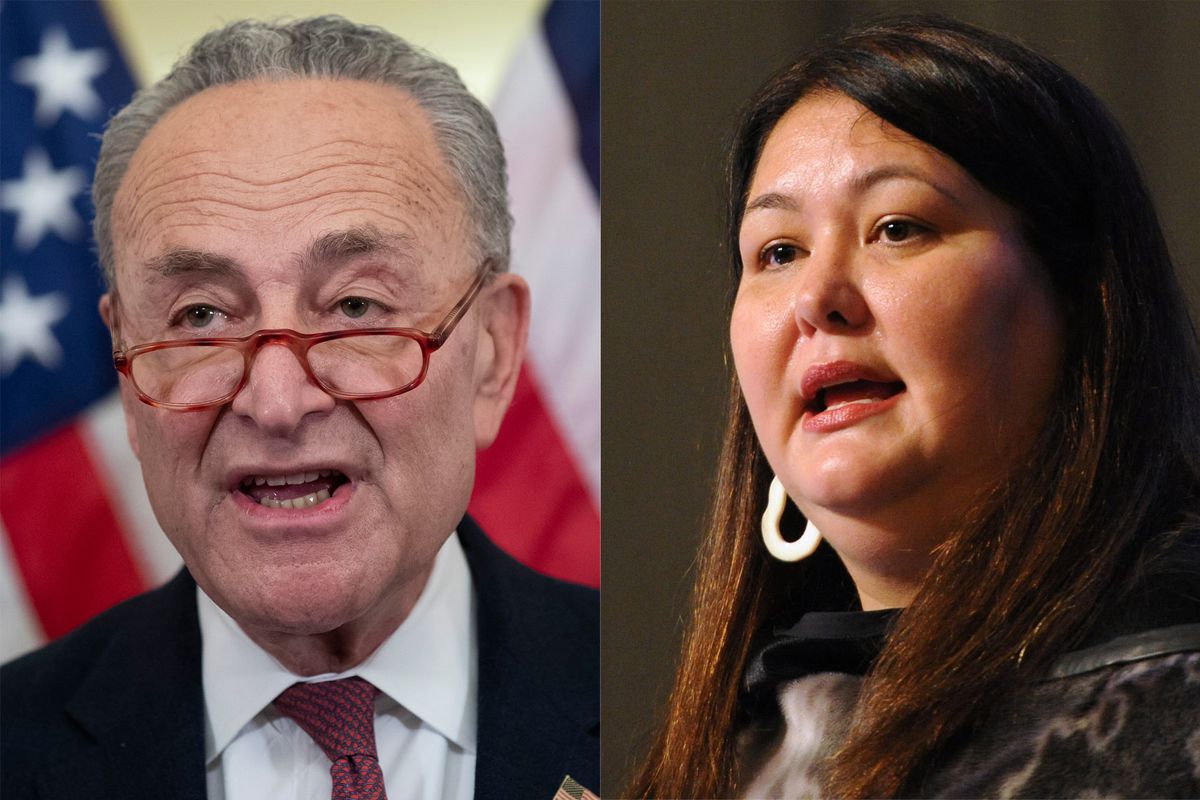 The battle over whether for-profit Alaska Native corporations should get a slice of the $8 billion in coronavirus relief intended for U.S. tribes exploded Thursday into a Twitter fight among U.S. senators, an Alaska-born Interior Department official and the governor.

Let’s get you caught up: Congress has agreed to give $150 billion in relief money to local governments across the country amid the coronavirus pandemic. Some of that money is set aside for tribal governments. But some tribes, especially in the Lower 48, were surprised to see they might be competing with large Alaska Native regional corporations for the cash.

At the center of the criticism is the head of the Bureau of Indian Affairs, Tara Sweeney, who is Alaska Native and served as an Alaska regional corporation executive before her appointment by President Donald Trump. On Tuesday, Indian Country Today reported that a group of tribal leaders from North Dakota, South Dakota and Nebraska accused Sweeney of trying to funnel Alaska tribes and companies more than their share of relief money. They are calling for her to be removed from the position of assistant secretary of Indian Affairs. (Sweeney said she did not request that regional corporations be made eligible for the money and that she is following the emergency funding law as passed by Congress.)

“Pres. Trump’s @ASIndianAffairs Tara Sweeney is diverting funds for tribal governments during coronavirus to for-profit Alaska Native Corporations,” he tweeted. “We can’t put these corporations before tribal governments & people. Sweeney used to be an exec for an ANC, and she wants to profit!”

We can't put these corporations before tribal governments & people.

Sweeney used to be an exec for an ANC, and she wants to profit!

Within a few hours Sweeney fired back.

@SenSchumer Even for you, this is an ignorant and despicably low attack that could not be further from the truth. Perhaps you should read the law you negotiated and voted for as Alaska Natives are entitled to receive the funding from @USTreasury. https://t.co/6hIAT5Y9qa https://t.co/Yr2OX6clhO

“@SenSchumer Even for you, this is an ignorant and despicably low attack that could not be further from the truth,” she tweeted. “Perhaps you should read the law you negotiated and voted for as Alaska Natives are entitled to receive the funding from @USTreasury."

And so did Sen. Dan Sullivan, R-Alaska.

Then, Gov. Mike Dunleavy added to his support to Sweeney.

Sen Schumer, as the Gov of Alaska, the state with the largest percentage of Native Americans, I am appalled that you would consider excluding our Alaskan Native entities. Read the bill. Thank you Asst. Sec. Tara Sweeney for fighting for ALL Native Americans.

“Sen. Schumer, as the Gov of Alaska, the state with the largest percentage of Native Americans, I am appalled that you would consider excluding our Alaskan Native entities. Read the bill,” he wrote.

In an interview with the Daily News on Thursday morning, before the volley of tweets, Sweeney said it was unclear how much money the Alaska regional corporations would receive from the $8 billion intended for tribes. That remains to be determined by the Treasury Department, she said.

The inclusion of the corporations in the relief funding comes from language in the CARES Act bill passed by Congress. The measure defines tribes to include Alaska Native regional and village corporations. Sweeney said in an interview that she did not ask for the inclusion of that language in the bill and in this case the law uses the same tribal definition as the Indian Self-Determination and Education Assistance Act, which describe “Indian tribes” as “any Indian tribe, band, nation, or other organized group or community, including any Alaska Native village or village corporation.”

Sullivan, in a phone interview Thursday, said that definition shouldn’t come as a surprise to senators who voted for the bill, including Schumer.

“Schumer and his team signed off on the definition and clearly knew about it. Maybe he didn’t but his staff certainly did," Sullivan said.

“Barely two weeks ago, Congress unanimously agreed that ANCs should be eligible for funding under the CARES Act and we expect Treasury to uphold and follow the law,” Murkowski said. “I’m extremely disappointed by the personal attacks and baseless allegations against Assistant Secretary Sweeney, including those from Senator Chuck Schumer earlier today."

Sullivan and Murkowski said they intended for Alaska Native corporations to be eligible for the money. At least one Alaska tribe has protested, saying the funding should be for tribes alone and that for-profit corporations should receive relief funding through other means.

The Alaska Native Claims Settlement Act in 1971 established 13 for-profit Alaska Native corporations that serve shareholders from each region of the state as well as smaller village-based corporations. These entities operate separately from the 229 federally recognized tribes in Alaska, many of which operate courts, police departments, utilities and provide other local government services. The regional corporations have traditionally prioritized maximizing benefits for shareholders while regional nonprofits and tribal health organizations handled health and social services in each region.

Sweeney said that, as written, the CARES Act funding would likely not be available for nonprofits or tribal health organizations. She said all relief money distributed in Alaska will have to be accounted for to auditors with any unused funding returned. The list of eligible items, services and goods the money could be spent on is still in development, she said.