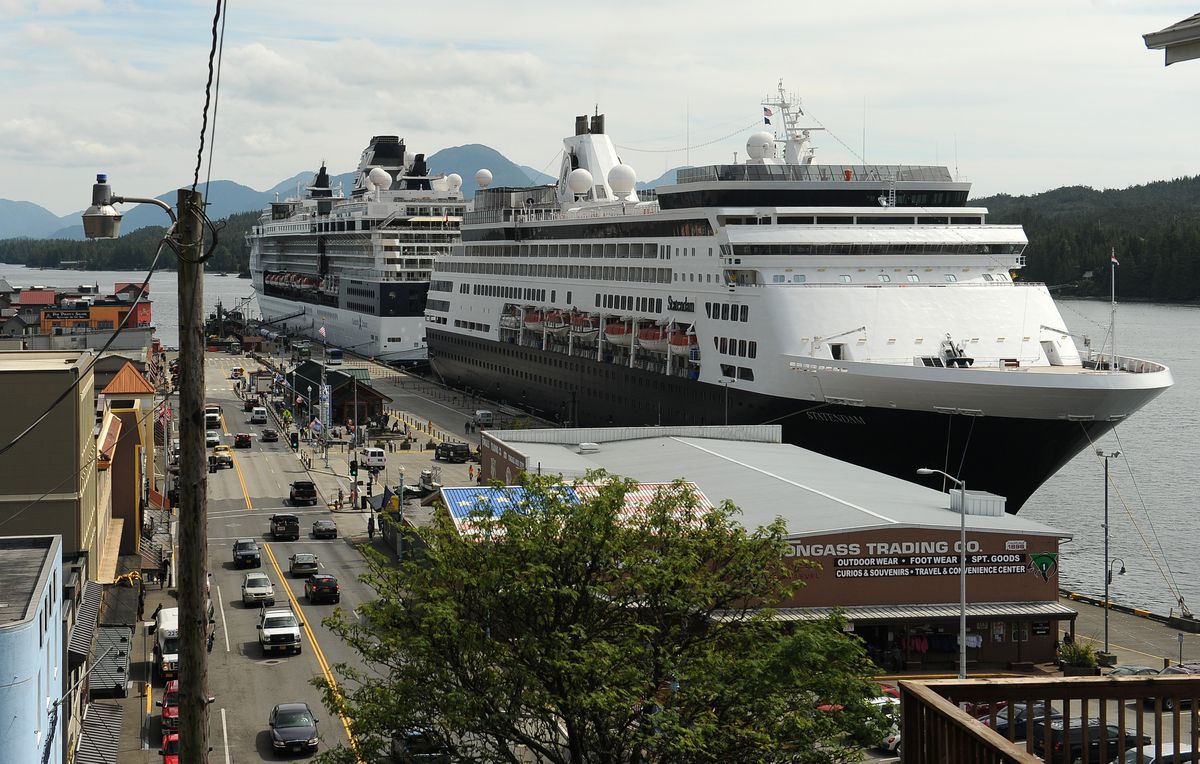 Cruise ships are docked in downtown Ketchikan on July 1, 2015. This year, with few — if any — ships scheduled to arrive, the Ketchikan Gateway Borough is expecting the loss of $2.5 million in tax revenue. (Bob Hallinen / ADN archive)

Cruise ships are docked in downtown Ketchikan on July 1, 2015. This year, with few — if any — ships scheduled to arrive, the Ketchikan Gateway Borough is expecting the loss of $2.5 million in tax revenue. (Bob Hallinen / ADN archive)

Gov. Mike Dunleavy has earmarked more than $560 million in federal coronavirus aid for local governments, but officials told the Alaska Legislature on Thursday that federal restrictions prohibit them from spending most of that money.

Those rules have left cities and boroughs with a huge problem: Many have lost significant amounts of tax revenue because of the pandemic, but they cannot use federal aid to make up that gap. Unless rules change, they will be forced to raise taxes or make big budget cuts, acts that would force layoffs and worsen a growing recession.

“One of the roles of government in a time like this is to offer some measure of stability, and I think that the CARES Act funding is supposed to be part of that stability. Unfortunately, based on my reading, the CARES Act funding doesn’t go far enough,” said Ketchikan Gateway Borough finance director Cynna Gubatayao.

Under Dunleavy’s proposal, the Ketchikan borough would receive $10.4 million between now and Oct. 1. But the federal Department of the Treasury has said that under its interpretation of the law, that money can be used only for limited purposes. The text of the law says the Treasury Department is the agency that decides what the money can be used for.

The biggest hit comes because tourist-friendly Ketchikan won’t see most of the cruise ships scheduled this summer. Gubatayo said the borough is facing “upward of $2.5 million or more in lost revenue.”

The Treasury Department’s rules explicitly state, “Although a broad range of uses is allowed, revenue replacement is not a permissible use of Fund payments.”

Officials from Fairbanks, Kodiak, Bristol Bay, Kenai, the Matanuska-Susitna Borough and the Northwest Arctic Borough all said that rule is a problem and they believe they may be prevented from spending most of the federal aid. Each spoke during a Friday hearing of the Alaska House Finance Committee.

If his government can’t spend the federal aid, Mat-Su Borough Mayor Vern Halter said the consequences will be widespread. The borough would have to completely cut its $18 million capital budget, affecting 245 contractors locally, he said.

“This is not the time to not put out a capital project budget,” Halter said. “All these businesses that are sitting idle can get some projects going.”

Jason Bockenstedt, chief of staff to Anchorage Mayor Ethan Berkowitz, said that in his view, the Treasury Department’s guidance is wrong: Members of Congress have explicitly said they intended to allow local governments to use the aid to make up lost revenue.

“Our view is that the guidance is incorrect,” he said of the Treasury Department rule.

“I hope the governor thinks like the city of Anchorage,” Halter said.

Asked whether they intended for cities and boroughs to cover lost revenue, Rep. Don Young, R-Alaska, and Sen. Dan Sullivan, R-Alaska said in written statements that they want as much flexibility as possible for municipalities. The office of Sen. Lisa Murkowski, R-Alaska, did not respond to a question.

In a series of emails, deputy Dunleavy communications director Jeff Turner said that “there continues to be a lack of clarity as to whether the use of CARES Act funds can be used to backfill lost revenue as a result of the pandemic.”

He said the Dunleavy administration “will operate under the guidelines that CARES act funding can be used to mitigate the impact of the pandemic on state/municipal expenses and to support businesses and the State’s nonprofits.”

The aid to cities and boroughs has not yet been approved by the Alaska Legislature, and Bockenstedt said he believes some of the uncertainty can be resolved if legislators specifically state that they believe the money can be used to offset lost taxes.

A legislative committee could take up the issue as early as Friday, but a continuing dispute between the governor and the Legislature makes the schedule uncertain. Local officials are urging quick action. Many are in the middle of their budget process for the coming year, and several said Thursday that their work must be complete by June 1.