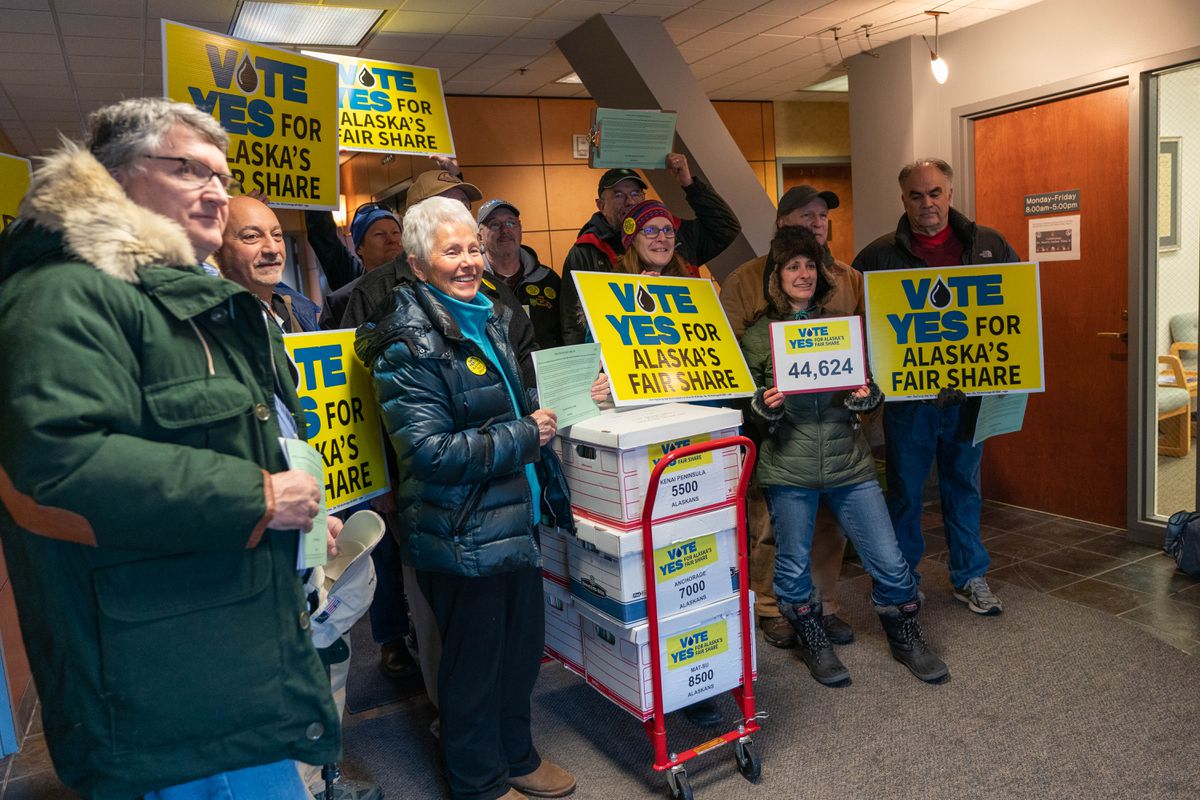 Supporters of the group Vote Yes for Alaska’s Fair Share prepare to turn in signature booklets on Jan. 17, 2020 at the Alaska Division of Elections in Anchorage. The ballot measure the group supports would apply to the North Slope’s large legacy fields and would bring in about $1 billion extra in production taxes annually, according to the group's chairman, Robin Brena. (Loren Holmes / ADN archive)

Supporters of the group Vote Yes for Alaska’s Fair Share prepare to turn in signature booklets on Jan. 17, 2020 at the Alaska Division of Elections in Anchorage. The ballot measure the group supports would apply to the North Slope’s large legacy fields and would bring in about $1 billion extra in production taxes annually, according to the group's chairman, Robin Brena. (Loren Holmes / ADN archive)

Attorneys for resource industry groups argued in Superior Court on Tuesday that salaries paid to signature gatherers for a ballot measure to raise oil taxes violate state law in a lawsuit that could have big implications for future voter-driven initiatives in Alaska.

The monthly payments made to employees of Las Vegas-based Advanced Micro Targeting Inc., which was hired in January by Vote Yes for Alaska’s Fair Share, were in excess of what should be a strict $1 per signature cap spelled out in state law, insisted Matt Singer, an attorney representing a half-dozen industry groups led by the Resource Development Council for Alaska.

The business advocacy and trade associations are all members of One Alaska, a campaign coalition organized to fight the Alaska’s Fair Share initiative, which aims to significantly raise production taxes on North Slope oil producers as a means to help close the state’s billion-dollar-plus annual budget deficits.

Signature gathering firms are commonly used by initiative sponsors to collect the large number of signatures needed to validate a statewide petition.

Vote Yes for Alaska’s Fair Share was required to submit 28,501 signatures, which equals 10% of voters in the last general election.

At the heart of the suit is a seemingly simple clause in Alaska law that states a petition circulator, or signature gatherer, “may not receive payment or agree to receive payment that is greater than $1 a signature, and a person or an organization may not pay or agree to pay an amount that is greater than $1 a signature, for the collection of signatures on a petition.”

“We ask that the court enforce the law as it is written,” Singer said to Superior Court Judge Thomas Matthews during teleconferenced oral arguments.

The Resource Development Council, the Alaska Chamber and others sued Lt. Gov. Kevin Meyer, the Division of Elections, which Meyer oversees, and Vote Yes for Alaska’s Fair Share in April on the grounds that Advanced Micro Targeting paid its employees too much to gather signatures in Alaska and therefore the signatures gathered by the company should have been thrown out by election officials.

Such a ruling would invalidate 25,865 of the nearly 39,174 signatures submitted by the initiative sponsors and certified by the Division of Elections.

In an odd happenstance of legal friends and foes, Alaska’s Fair Share sued Meyer and the Division of Elections last November for what it claimed was an inaccurate and politically slanted ballot summary of the initiative. A Superior Court judge ruled in favor of Alaska’s Fair Share on June 10, ordering the division to correct a sentence in the summary.

The Resource Development Council, the Alaska Chamber, the Alaska Trucking Association, the Alaska Miners Association, the Alaska Support Industry Alliance and the Associated General Contractors of Alaska filed the suit, contending that the initiative would drastically increase taxes on North Slope producers and deter investment by the industry that drives an outsized portion of Alaska’s economy at a time when oil companies are struggling to adjust to the second sustained oil price collapse in the last five years.

In advertisements, Advanced Micro Targeting offered to pay signature gatherers $3,500 to $4,000 per month with an expectation they would collect at least 80 per day, six days per week, according to the group’s complaint, which attorneys for the state and Alaska’s Fair Share did not dispute.

Invalidating the signatures would not officially kill the initiative, but it would force Alaska’s Fair Share to gather the signatures again and keep it off the ballot until the next statewide general election in 2022.

Longtime oil industry attorney Robin Brena argued for Alaska’s Fair Share that the Legislature wrote the law as it did to limit what he called “bounty hunting” for signatures.

“It does not address any other form of payment to circulator,” Brena said of the law.

“To state the obvious there is no bounty when petition circulators are paid by salary.”

Brena chairs Vote Yes for Alaska’s Fair Share and has been a leader in the push to raise the production tax since the More Alaska Production Act, best known as Senate Bill 21, passed in 2013.

The initiative sponsors allege, among other things, that lawmakers are shirking their constitutional duty to receive the maximum possible benefit for the state’s publicly owned resources under SB 21. They estimate the Alaska’s Fair Share Act, which will be on the November ballot as Ballot Measure 1, will raise approximately $1.5 billion in revenue at a time when the state desperately needs it.

Advanced Micro Targeting employees were also paid for other work on the campaign, so parsing out how much of their compensation was for what work is impractical, Brena said, while also stressing that the Division of Elections has certified each of the signatures that would be thrown out.

He said the lawsuit is a concerted effort by companies that do not want to pay more taxes to disenfranchise initiative signers through potential administrative errors by the Division of Elections.

The large North Slope producers are major donors to the trade and business advocacy groups in the state.

A motion to dismiss filed by Alaska’s Fair Share highlights that the groups did not raise the issue when Advanced Micro Targeting signature gatherers worked on prior, unrelated initiatives.

Assistant Attorney General Margaret Paton-Walsh emphasized that the lieutenant governor does not have subpoena or investigative powers in elections statutes to verify that the affidavits submitted by signature gatherers are accurate.

Rather, state law says election officials must verify that the affidavits are complete, which is why falsifying an affidavit is a criminal offense of the individual signature gatherer, according to Paton-Walsh.

She also noted that state law only gives election officials 60 days to certify the validity of the initiative petition.

“60 days is not enough time for any kind of investigation into the truth of the circulator affidavits,” Paton-Walsh said.

Singer insisted the Legislature intended to rid initiatives of “big money,” noting that leaders of the Recall Dunleavy campaign did not need paid gatherers to collect the first round of signatures needed to remove the governor from office.

“If there’s grassroots support for an initiative, signatures can be gathered without any payment,” he said.

Brena countered that invalidating the signatures in this case would set a precedent that would make it impractically difficult for citizens to organize an initiative campaign.

“The proper remedy (for a false affidavit) is to pursue the criminal matter and not to disenfranchise 40,000 Alaskan voters,” Brena said. “That would be an absurd result.”

Judge Matthews said he would make a ruling quickly as the case is likely headed to the Alaska Supreme Court prior to the November election.