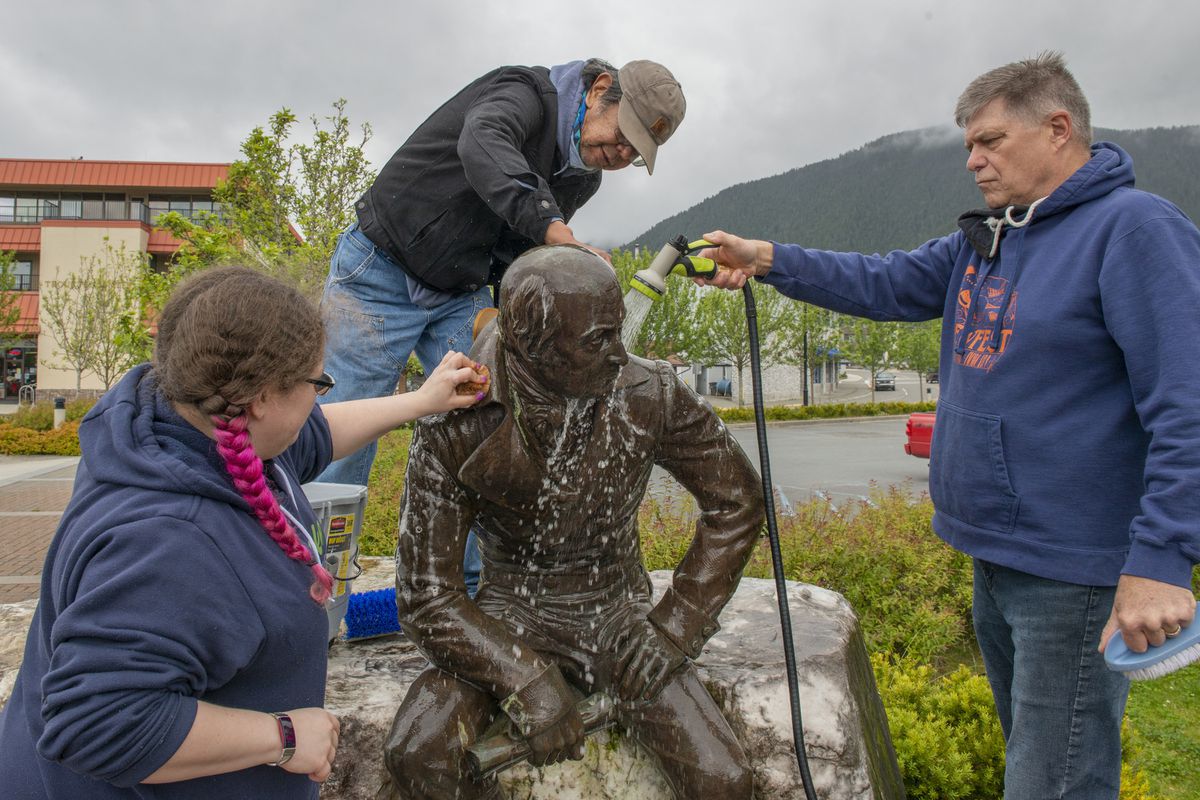 In a 6-1 vote Tuesday night, the Sitka Assembly approved a plan to move Baranov’s likeness from a prominent spot in front of Harrigan Centennial Hall, which serves as city hall and a convention center.

A competing proposal, which would have made the removal conditional on a citywide vote, was withdrawn.

Baranov was the first chief manager of the Russian-American Company and directed the expansion of Russian authority in coastal Alaska during the late 18th and early 19th centuries.

Before the vote, assembly members and attendees were ushered into the meeting by more than 100 protesters who stood outside the building and urged removal.

“This group, we were energized by Black Lives Matter, all that was happening down south, and we said, ‘Hey, what can we do to harness that energy?' And the statue was such an obvious thing,” she said.

Baranov established a European settlement at what is now Sitka during the early 19th century. The original Tlingit inhabitants opposed the Russian pursuit of the area’s sea otter furs and burned the settlement in 1802. Baranov, reinforced by shipborne artillery, reconquered the site in 1804 and laid the groundwork for Russian rule that lasted until 1867.

The statue was donated to the city in 1989 and has been moved at least once before.

Local Native leaders have long sought the landmark’s removal, calling it a racist and imperialist symbol. The statue has occasionally been vandalized in protest.

Before Tuesday’s meeting, the Sitka Tribe of Alaska passed a resolution supporting the statue’s removal to a museum.

“What we’re saying is to put it in a more complete context and put it in a place where a fuller story can be told,” said Kathy Hope Erickson, the tribe’s chair.

The family that donated the statue to the city also said it supported the move if the assembly did.

During the meeting, testimony was overwhelmingly in favor of removal.

Dionne Brady Howard said the statue stands for the “historical trauma” created by the Russian conquest. The statue’s continued existence is kalits'ígwaa — “a touchy subject,” she said, using the Tlingit word.

Paulette Moreno urged members of the assembly to remove the statue now, rather than wait for a citywide vote.

During her speech, she held up a roll of $25 worth of coins bearing the likeness of Native leader Elizabeth Peratrovich and said she would donate them to the statue’s upkeep. Some Sitka residents have proposed a Peratrovich statue replace Baranov’s likeness.

Public support for the statue removal swayed Assemblyman Kevin Mosher, who said, “After listening to everything, I am going to vote ‘yes’ to support this.”

Before the meeting, he had proposed putting the issue to a citywide vote. His defection left Valorie Nelson to cast the lone “no” vote. She said she doesn’t support moving the statue to the museum.

Nelson has come under intense local scrutiny for a letter in which she compared the Baranov statue to local Tlingit monuments, including a war canoe displayed near the statue. In the letter, she suggested those Native monuments might need to come down as well, and complainers might be happier in some other town.

Tuesday’s vote creates a six-member commission — three members from the assembly and three from the Sitka Tribe — to coordinate the statue’s movement and consider what might replace it.

No date has yet been set for the statue’s removal.

Correction: A Sitka assemblyman was misidentified in the first version of this article. He is Kevin Mosher, not Paul Mosher.