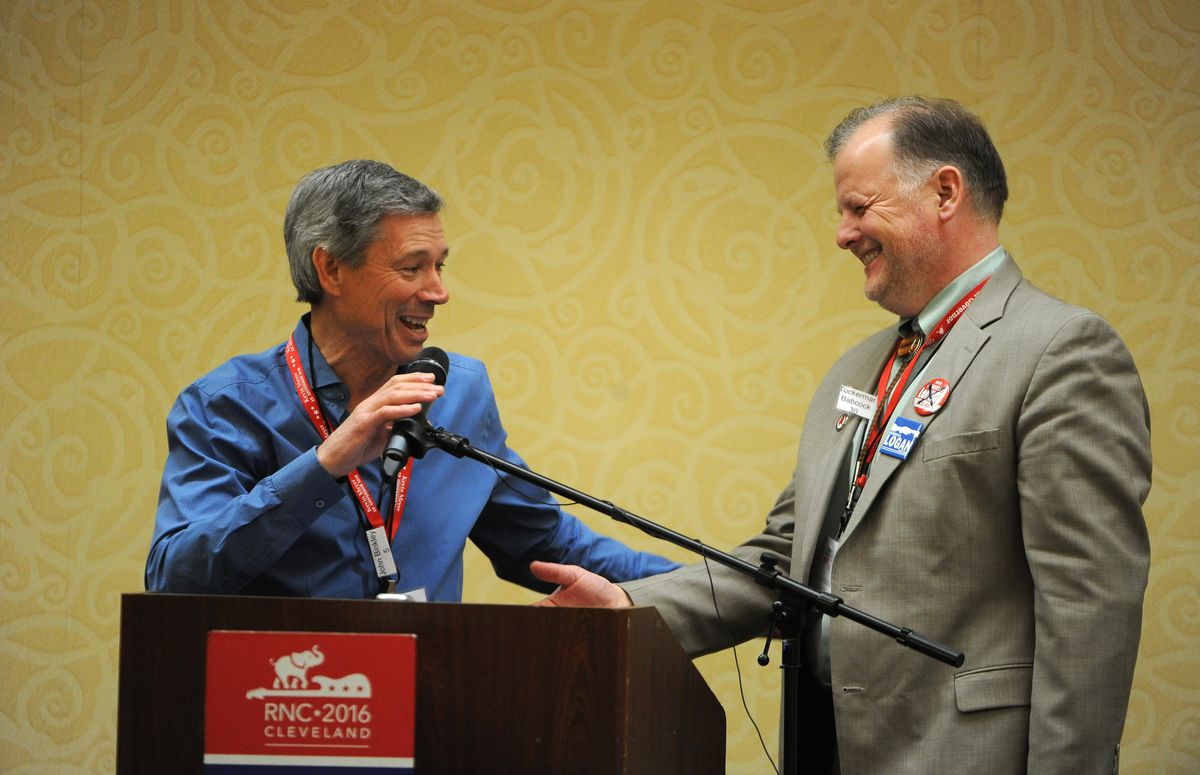 John Binkley, left, and Tuckerman Babcock at the 2018 Republican state convention in Anchorage. Binkley has been named to the state's redistricting board. (Bob Hallinen / ADN file)

John Binkley, left, and Tuckerman Babcock at the 2018 Republican state convention in Anchorage. Binkley has been named to the state's redistricting board. (Bob Hallinen / ADN file)

Senate President Cathy Giessel has named John Binkley, a Fairbanks businessman, former Republican legislator and 2006 GOP candidate for governor, to the board that will redraw Alaska’s political boundaries after the 2020 census.

Giessel, a Republican, announced her selection one day after Gov. Mike Dunleavy picked two other Republicans for the five-person board, which now has a firm Republican majority.

Binkley said it is not his intent to be a partisan figure.

“My hope is that we have a fair process with a balanced outcome and that people will respect that we listen to Alaskans,” he said.

Speaker of the House Bryce Edgmon, I-Dillingham, will name the next selection to the board but said Tuesday he does not have a firm timeline to do so. The state constitution requires selections be made before Sept. 1.

After Edgmon’s pick, Alaska Supreme Court Chief Justice Joel Bolger will name the fifth and final person to the board.

Binkley’s sons and daughter are the owners of the Anchorage Daily News, and Binkley himself does not have a role in the paper’s operations. The Binkleys are not involved in news coverage.

Speaking Tuesday, one day before announcing her pick, Giessel said she had been “looking for someone who of course is a Republican but is very fair-minded. A very important criteria to me is someone who will listen.”

She said she “surveyed Republicans from every community in the state” before coming up with a short list of potential picks.

“One of the things I told them … I was looking for an Alaskan that all Alaska could be proud to have serving on this board,” she said, adding that she has no expectation that her pick will protect her own legislative district.

The Alaska Constitution requires at least one redistricting board member from each of the state’s four judicial districts. Binkley would fulfill the requirement to have someone from the Interior. Dunleavy’s picks were from Southeast and Southcentral Alaska. The seat representing the North Slope and Western Alaska has not yet been filled.

After the U.S. Census Bureau releases final 2020 census results in July 2021, the board will have no more than 90 days to finalize new boundaries for state House and Senate districts. The board cannot add seats to the House or Senate, but it must redraw the lines so each district has roughly equal population.

To limit gerrymandering, the state constitution requires districts to be “formed of contiguous and compact territory containing as nearly as practicable a relatively integrated socio-economic area.”

According to state population estimates, the board will be required to draw a House district in the Matanuska-Susitna Borough at the expense of Fairbanks, Southeast and parts of rural Alaska.

The board’s actions are always politically contentious, and each decade since 1970, the redistricting process has ended with a decision by the Alaska Supreme Court.