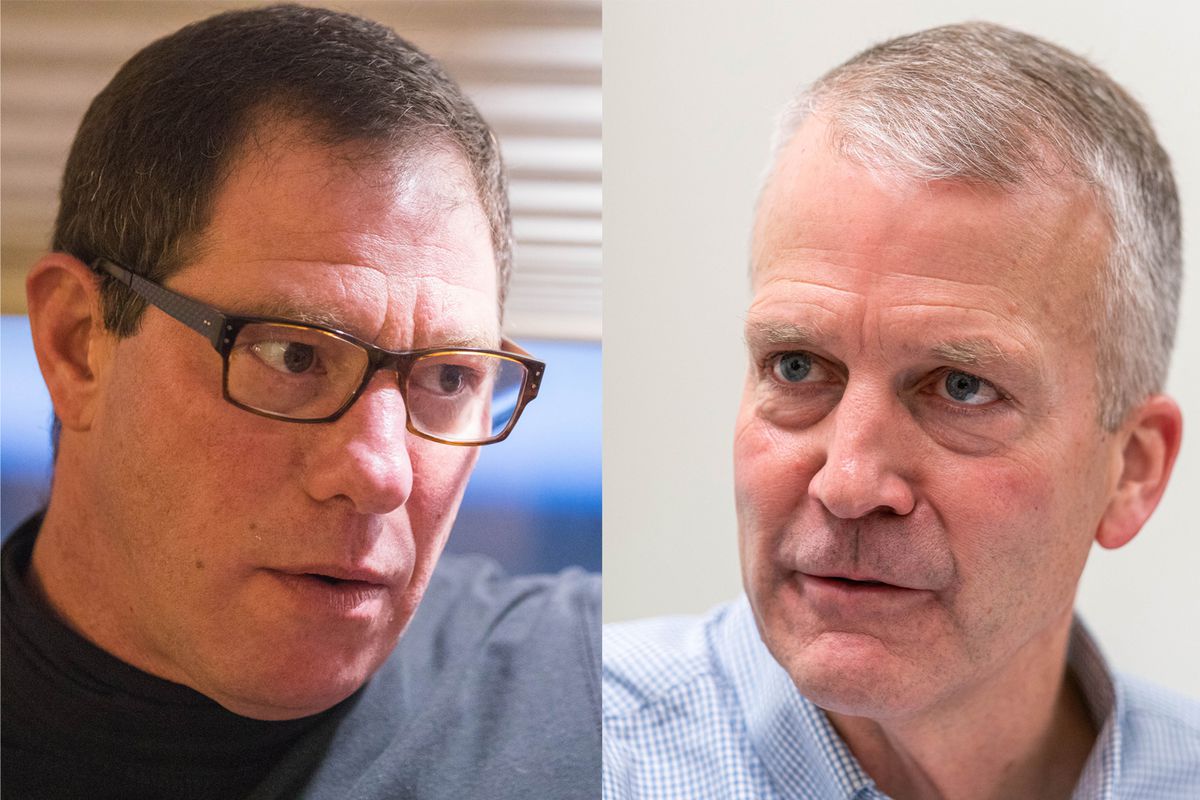 Independent Al Gross, left, and Sen. Dan Sullivan, a Republican, are running for the U.S. Senate in Alaska this year.

Independent Al Gross, left, and Sen. Dan Sullivan, a Republican, are running for the U.S. Senate in Alaska this year.

Alaska U.S. Sen. Dan Sullivan is the latest target for the Lincoln Project, a group of current and former Republican campaign operatives seeking to unseat President Donald Trump along with Senate Republicans for their devotion to the president.

On Wednesday, the group debuted an ad it funded that promotes challenger Dr. Al Gross, an orthopedic surgeon running as an Independent.

“Dan Sullivan, for his part is no longer a Republican,” said Lincoln Project co-founder Reed Galen. “He’s no longer a conservative. He’s a Trumpist. When it says Dan Sullivan, US Senator, it should have a ‘T’ behind his name, instead of a ‘R.‘”

Asked about the criticism of Sullivan being the president’s man, Sullivan campaign manager Matt Shuckerow said, “The senator is proud of the work he’s done over the last six years.”

Opening the Arctic National Wildlife Refuge to oil drilling, increasing military spending and infrastructure investments were important to Alaska, Shuckerow said. Sullivan’s legislation, including programs to reduce plastic pollution in the ocean and reduce domestic violence, were signed by the president.

The Lincoln Project is spending more than $1 million on its ad, which will run on broadcast and digital platforms statewide for seven to 10 days. It promotes Gross rather than rips Sullivan, but the Lincoln Project bases its decision to get involved in a race primarily on the incumbent rather than the challenger, Galen said.

While the ad will run for about a week, the group says it intends to be active until November, and could spend more depending on how the race shapes up.

“If they’re starting out of the gate with $1 million, it’s a decent deal,” said Mary Ann Pruitt of PS Strategies, an Anchorage firm. Her company has done media buying for political campaigns in Alaska before and is not working with Gross or Sullivan.

“This is a small market. Alaska is one of those markets that, for lack of a better term, is a cheap date. We are one that it is easier to buy media in at a cheaper rate,” she said.

Since 2019, the Lincoln Project has spent about $8.5 million on political campaigns at the federal level, according to Federal Election Commission filings.

Galen said Senate Republicans have forgot about fiscal conservatism or the rule of law, and instead are devoted to Trump.

“A Republican, a conservative, would not be okay with federal authorities in the streets of our cities and states,” he said. “They would be screaming to the mountaintops about states rights and the 10th Amendment.”

The Lincoln Project is a group of current and former Republicans who are dedicated to removing Trump and his perceived loyalists in the Senate from office in 2020. Collectively, its team has more than 200 years of experience in electing Republicans, and one of its co-founders is George Conway, husband to Trump adviser Kellyanne Conway.

Galen said the Lincoln Project opposes all Senate Republicans other than Mitt Romney, a Utah Republican and sharp critic of Trump. So far, the group has targeted Republicans in Alaska, Arizona, Iowa, Montana, North Carolina, South Carolina and Maine. The new Alaska ad is part of a $4 million ad blitz for Senate candidates, Axios reported.

Shuckerow asked how they can be Republicans if their objective is defeating Senate Republicans.

Exclusive: The Lincoln Project is making its biggest blitz to date, airing ads against Senate Republican incumbents in Alaska, Montana and Maine:

"Maine deserves a leader, not a Trump stooge." https://t.co/fyNbBjciYu

Galen said just because the Lincoln Project is advocating for Democrats doesn’t mean it operates like a leftist strategy group.

“We understand how Republican voters receive information and how they process information,” he said. “We’re able to bring Republican language and iconography to campaigns that maybe Democratic groups couldn’t.”

Even before the ad, the group made an impact. On July 23, Gross had under 7,000 followers on Twitter. The group tweeted, asking people to follow Gross. The tweet got more than 20,000 likes. Far more actually heeded the advice. On Tuesday, Gross had about 66,400 followers, nearly 18,000 more than Sullivan.

“A guy like Dan Sullivan is a prime candidate to be shown to be someone who no longer deserves the title of the United States Senator,” Galen said. Galen said he helped Sullivan with media training and debate preparation in 2014.

Shuckerow said Gross “was hand-picked by the national party bosses, the Alaska Democratic Party, to run for this Senate seat.”

“It’s no surprise that their friends from Outside of Alaska are coming to his aid with a million-dollar media buy,” he said.

Groups for and against Sullivan spent more than $50 million in Alaska’s 2014 US Senate race, which remains the state’s most expensive political campaign.

A database on the site FiveThirtyEight, “Tracking Congress in the Age of Trump,” shows Sullivan has voted in line with the president’s position 91.5% of the time. Alaska’s other senator, Republican Lisa Murkowski, aligned with Trump in 74.6% of votes.

Recent polling shows Sullivan with a lead. A July 17 poll from Alaska Survey Research had Sullivan up 13 points, and a July 9 poll from Public Policy Polling had him up five points.

While Sullivan, elected in 2014, has more name recognition, Gross has amassed a sizable campaign bank account.