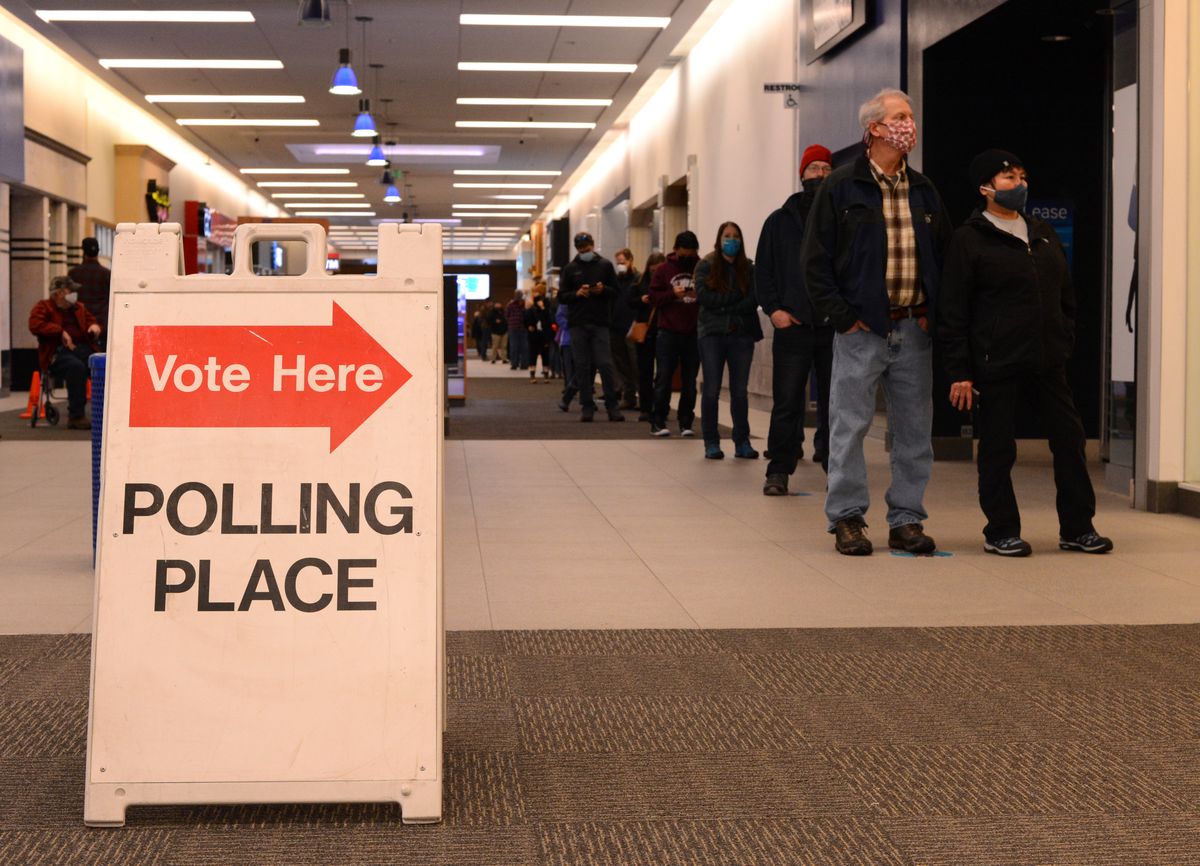 With a week of voting to go, Alaskans have already cast more votes before Election Day than they did in 2016.

The COVID-19 pandemic is driving an unprecedented number of voters to the polls early, and turnout is nearing 30% of all votes four years ago.

It’s too early to tell what the surge means for the results of the election, or whether 2020′s total turnout will top the number of votes four years ago. Many more advance votes are expected before polls open on Election Day itself.

While Alaska’s figures are a state record, the 49th state is in the bottom half of national turnout so far, according to figures compiled by University of Florida professor Michael McDonald. Texans have already cast enough ballots to reach 80% of their 2016 total. Sometime this week, that state is expected to surpass its entire turnout four years ago.

In Alaska four years ago, an estimated 79,885 voters cast ballots before Election Day. As of Monday morning, 92,137 had done so, according to figures from the Alaska Division of Elections.

On Monday, a line snaked across the concourse at Anchorage’s Midtown Mall as voters waited up to 45 minutes.

“I had a hard time finding the end of the line,” said Kathy Goins.

Although there was no line at Anchorage City Hall, where another early-voting site has been set up, there also isn’t any easy parking, Goins said.

Michele Fowler voted early at the mall in prior elections, but Monday was the first time she could recall a line that stretched throughout the building. She said the wait was worth it.

“I’d rather stand in line now than after work on Election Day,” she said.

Natasha Schneider stood in line with her husband, Nathan, and their 7-month-old son Thatcher.

“For us, it’s just a schedule issue,” Nathan said.

Natasha said she didn’t know what “early voting” meant until hearing it explained on a podcast. She had thought it meant voting early on Election Day.

In Alaska, early voting involves physically going to one of 10 locations statewide starting Oct. 19. As long as that vote is cast before the polling station closes on Thursday, it will be counted on Election Day.

Alaskans can also request to vote absentee before Election Day. That process can involve receiving a blank ballot at home, filling it out and turning it in by mail, fax or dropbox. According to state figures, more than 120,000 Alaskans have requested absentee ballots and more than 70,000 have been returned.

It’s too late to request a blank ballot by mail; voters must now request one by email. There are also many places to cast an absentee ballot in person across the state.

Absentee votes, regardless of how they’re cast, will be counted starting seven days after Election Day.

Jed Dixon brought his absentee ballot to the Midtown Mall voting site and stuck it in a dropbox. He said he’s concerned about the speed of the Postal Service, and all 10 early-voting sites have dropboxes for absentee ballots. Other dropboxes are located across the state.

The U.S. Postal Service is advising voters to mail absentee ballots by Tuesday.

Standing in line to vote, Aaron Hutson said he expects Alaska’s COVID-19 rates to continue rising, so it makes sense to vote early.

“The way the numbers are going, you don’t know if everything’s going to get shut down,” he said.

One early voting site in Palmer was closed over the weekend when a poll worker tested positive for COVID-19.

Behind Hutson in line were Brian and Shanna Dunlevy, who agreed that COVID-19 is probably driving many early votes. But there’s also a lot at stake in this year’s election, they said.

“One way or another, it’s going to change the country for four years,” Brian said.

“If not forever,” Shanna said.