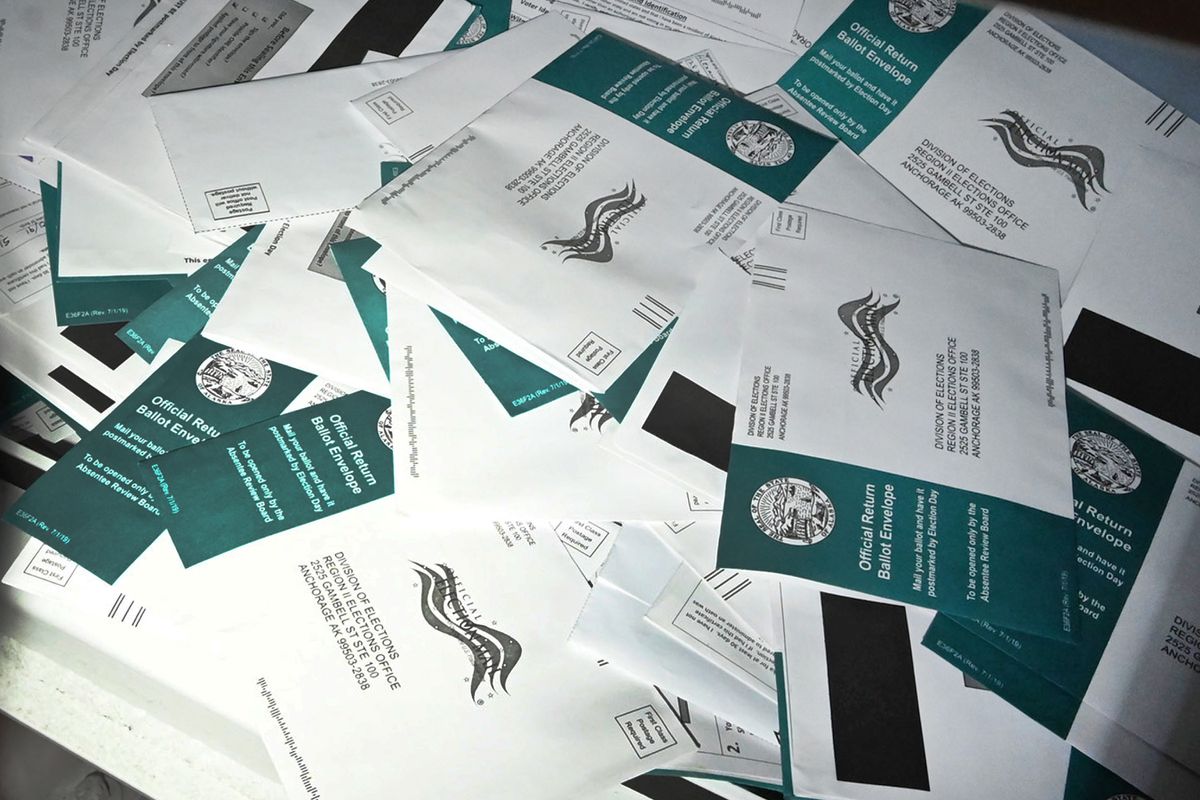 Ballot envelopes being removed from a ballot drop box outside the Region II Elections Office on Gambell Street after the polls closed on Tuesday, Nov. 3, 2020. (Bill Roth / ADN)

Ballot envelopes being removed from a ballot drop box outside the Region II Elections Office on Gambell Street after the polls closed on Tuesday, Nov. 3, 2020. (Bill Roth / ADN)

A ballot measure proposing to change the way Alaskans elect their politicians was trailing by a wide margin in early returns Tuesday.

With at least 123,222 votes uncounted until next week, the leading vote-yes and vote-no organizations said before Election Day that they do not expect to know a winner until then.

If approved and implemented, the measure would create a single primary election for each public office, and the top four vote-getters would advance to a general election where the winner is chosen by ranked-choice voting. The measure also requires greater financial disclosure by groups contributing to state candidates' campaigns.

Support and opposition crossed traditional party lines, with independents joining the Libertarian Party and Green Party in support. Alaskans for Better Elections, the leading vote-yes organization, received more than $7 million in funding in 2019 and 2020, mostly from a handful of wealthy Outside groups.

Party-line Democrats and Republicans opposed the measure, and the main vote-no group, Defend Our Elections, received less than $500,000, mostly from Republican and Republican-connected sources.

On Election Day, Anchorage voter Luke Seymour said he thought the measure had been overshadowed by Ballot Measure 1, which would change the tax system used for some North Slope oil fields. More than $25 million has been spent in advertising for and against that measure.

The campaign in favor of the Ballot Measure 2 sought to portray it as a solution for what backers believe is a broken electoral system.

In South Anchorage, the latter argument swayed voter Bonnie Henry, who said she likes the idea of a single, nonpartisan primary election but doesn’t like the ranked-choice voting concept.

Voters at three different Anchorage polling stations who said they voted in favor of the measure had difficulty explaining why they did so. In the Russian Jack neighborhood, voter Mary Frances said she is generally dissatisfied with the way things operate now.