Despite disagreements with Interior secretary nominee, Alaska Rep. Don Young tells senators ‘she will listen to you’ 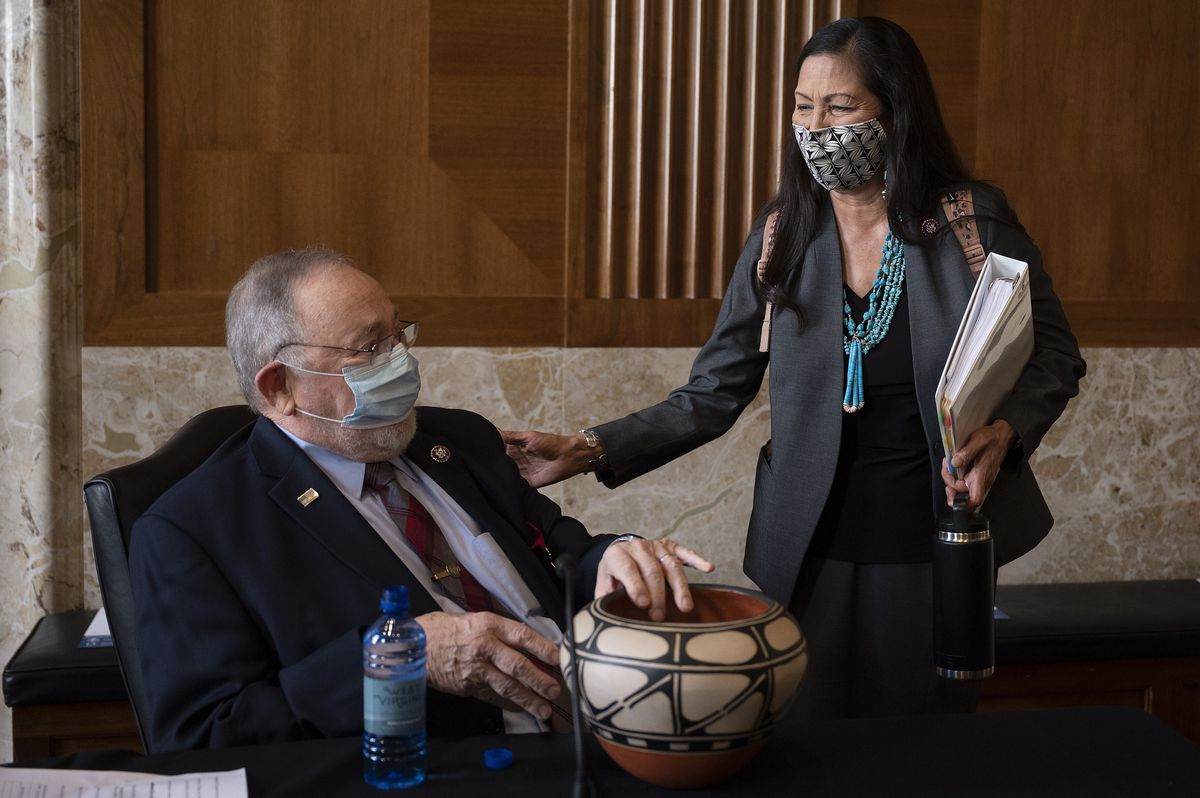 Rep. Deb Haaland, D-N.M., delivers a gift to Rep. Don Young, R-Alaska, before the start of the Senate Committee on Energy and Natural Resources hearing on her nomination to be Interior Secretary, Tuesday, Feb. 23, 2021 on Capitol Hill in Washington. (Jim Watson/Pool via AP

Rep. Deb Haaland, D-N.M., delivers a gift to Rep. Don Young, R-Alaska, before the start of the Senate Committee on Energy and Natural Resources hearing on her nomination to be Interior Secretary, Tuesday, Feb. 23, 2021 on Capitol Hill in Washington. (Jim Watson/Pool via AP

Alaska Republican Rep. Don Young on Tuesday urged senators to support Interior secretary nominee Deb Haaland during a hearing before a Senate committee, calling her a friend who will listen to Republican concerns, even though he disagrees with her on oil and gas development.

Young told the Senate Energy and Natural Resources Committee that he believes Democratic President Joe Biden has the right to choose his “crew.” Young said he’s “quite proud” that Rep. Debra Haaland, D-N.M., is an American Indian, a Laguna Pueblo from New Mexico.

“I would suggest respectfully you’ll find out that she will listen to you,” Young told the 20-member committee. “She may not change, like she and I do not agree on carbon fuels, you know that, we’ve said this before. But it’s my job to try and convince her that she’s not all right, and her job to convince me I’m not all right.”

If appointed by the full Senate, Haaland would be the first Native American presidential cabinet member. That’s been a “long time overdue,” Young said.

Haaland, a strong supporter of renewable energy, has generated Republican opposition for her views on traditional resource development such as oil and gas, an industry that has long supported Alaska’s economy.

She’s also known for advocating for American Indian rights. Alaska is home to about 40% of the nation’s 574 tribes.

Alaska Republican Sen. Lisa Murkowski, a member of the committee and its most recent chair, said during her limited floor time that Interior has an “outsized” role in Alaska, with the federal government’s widespread land ownership here.

She said Alaskans have felt targeted by Biden’s actions, including his Day One action placing a temporary moratorium on oil and gas activity in the Arctic National Wildlife Refuge. She asked Haaland if she would help support projects that advanced under President Donald Trump’s Interior Department but are facing court challenges, including ConocoPhillips large Willow oil field.

Haaland told Murkowski she’ll follow the law, and that Biden doesn’t want to “cripple” any state. Haaland said she’ll rely heavily on her relationship with Murkowski to understand Alaska’s unique issues and to ensure Alaskans have opportunities.

Young said he and Haaland become friends on the House Subcommittee on National Parks, Forests, and Public Lands. He introduced Haaland at her request.

The two have worked with each other across the aisle to pass bills, including addressing the missing and murdered Indigenous women’s crisis, he said.

He said President Biden, not Haaland, is responsible for recent actions delaying oil and gas activity on federal lands, including in Alaska. Haaland will listen to requests such as for increased access from hunters to public lands, Young said.

He said oil and gas will continue to play a prominent role in Alaska and globally.

“If we have people in the Department of Interior such as Deb maybe there will be a balance,” he said. “And anybody who thinks they’ll cut off fossil fuels immediately, you’re smoking pot.”

In an interview with the Daily News on Tuesday, Sen. Dan Sullivan, R-Alaska, said he has not yet decided whether he will vote to confirm Haaland.

The hearing to consider Haaland’s nomination will continue Wednesday morning.