U.S. Senate candidate’s $81,000 state-paid moving bill won’t have to be paid back 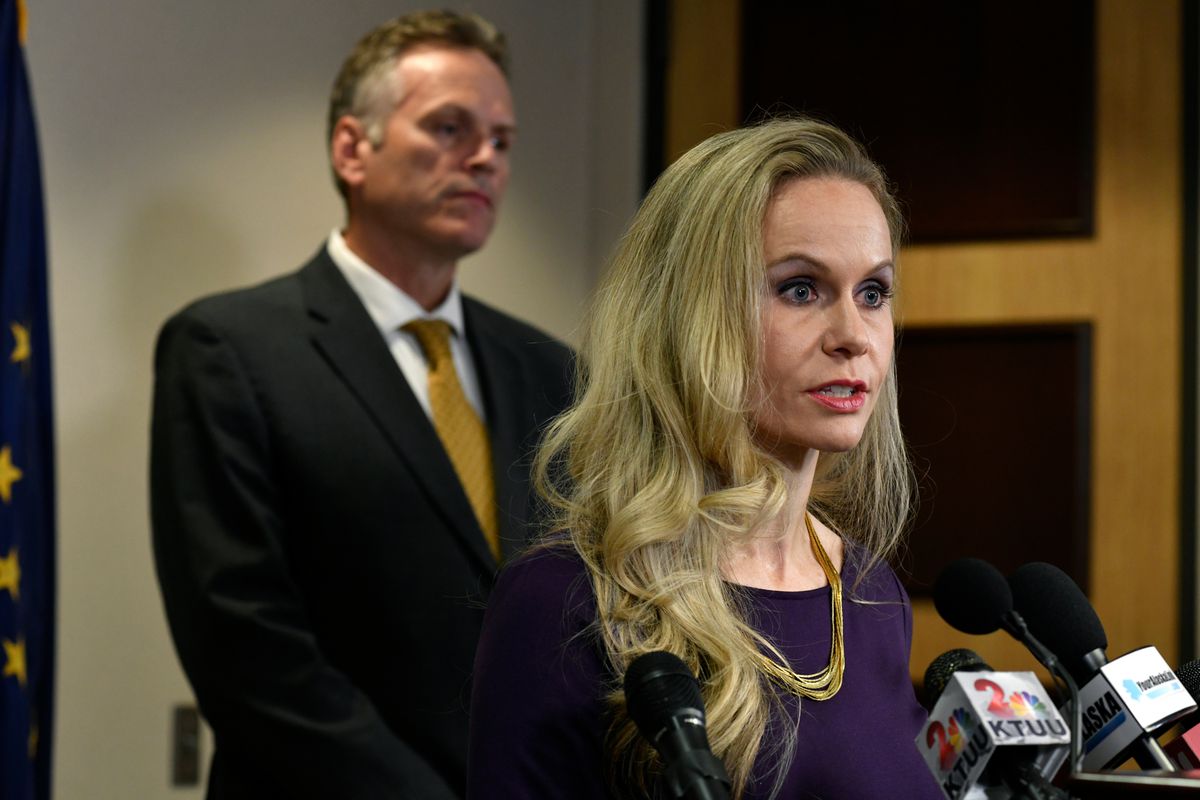 The state of Alaska paid more than $81,000 to relocate former commissioner and current Republican U.S. Senate candidate Kelly Tshibaka and her family to Anchorage in 2019 — an outsized bill she says was caused by a state policy that forced her to accept bids from fraudulent movers, driving up the cost.

Tshibaka resigned March 29, the same day she announced she is running for the Senate seat held by Lisa Murkowski. She has made saving the government money a centerpiece of her campaign, touting her accomplishments cutting costs in her department as commissioner.

State regulations require employees to pay back a portion of relocation expenses if they stay at their job for less than two years after the completion of their move. Tshibaka resigned two years and 39 days after the date her move ended.

A Harvard-trained attorney who grew up in Anchorage, Tshibaka had been living in Washington, D.C., with her family and working for the U.S. Postal Service Office of Inspector General when she was hired by the administration of Gov. Mike Dunleavy in early 2019.

Tshibaka was initially hired as a senior policy adviser. Dunleavy named her commissioner after his first nominee withdrew from consideration. Her husband, Niki Tshibaka, took a newly created assistant commissioner role within the Department of Education.

Tshibaka has “dedicated her career to exposing waste and fraud, has returned hundreds of millions of dollars to American taxpayers, and is always mindful of the good stewardship of public funds,” said her adviser Mary Ann Pruitt in an email.

The state paid a total of $81,277 for the family of seven to relocate to Alaska in early 2019, according to a compensation report prepared by her department. (That’s a slightly higher total than what’s reflected on her moving expenses form filed with the state.) The cost of the move far exceeded other executive branch moving costs reported that year. While some people hired by the state are offered capped moving expenses as low as $2,500, high-level hires defined as “public officials” are offered “actual and necessary” moving expenses by state administrative code.

Legislators have drawn scrutiny for their moving expenses in the past. In 2019, the state paid for $34,139.65 in moving expenses for Rep. Donny Olson, a Democrat from Golovin, to attend the legislative session in Juneau. The Legislative Affairs Agency had previously scolded Olsen for moving items such as a piano and three air compressors, while acknowledging that it’s expensive to move a large family.

The state of Alaska will pay for moving costs for 15,000 pounds of household goods, plus two vehicles and other costs associated with moving, according to the state’s relocation guidelines. Airfare to Alaska and other costs such as pre-move house hunting trips can also be included. There’s no maximum amount the state will pay for a move, according to Corey Allen Young with the governor’s office.

An $80,000 family move is high but not entirely without precedent, said Rick Childers, an executive at Alison’s Relocations, an Anchorage business that helps move families and military transplants. Moving to Alaska is expensive, and northbound moves cost more, he said.

“The move cost is in line,” he said. “There’s just all kinds of other travel costs the state authorizes.”

The Tshibaka family’s $81,277 cost to the state included a $37,000 payment to a van line, $13,334 reimbursement for a moving company deposit, additional payments to an additional van line company and $7,657 in reimbursement for temporary housing in Anchorage, along with other costs, according to an itemized moving expenses report filed with the state that was obtained by the Daily News.

When asked if the state paid more than $80,000 in moving expenses for any other officials in the past two years, Corey Allen Young with the governor’s office asked ADN to submit a formal public records request for that information.

The move was a disaster, according to Tshibaka’s adviser.

“State officials directed Kelly to obtain multiple moving company bids and she was required to select the lowest one, despite a moving expert’s warning that an extremely low bid was a red flag for potential fraud,” wrote Pruitt. “Sure enough, throughout the course of the move, there were contract breaches, attempts at sudden cost increases, and refusals to abide by the terms of the contracts.”

The movers had to be changed several times, Pruitt wrote in a statement. The campaign said the movers involved were not Alaska companies.

“Every step of the way, Kelly urged state officials to reform the system of awarding state contracts of this nature, recommending the use of vetted and trusted vendors, rather than automatically selecting unknown and untested companies who happened to submit the lowest bids,” Pruitt wrote.

Tshibaka documented the problems and submitted her findings to the attorney general’s office, according to Pruitt. The governor’s office didn’t immediately respond to a question about whether any action or policy change happened.