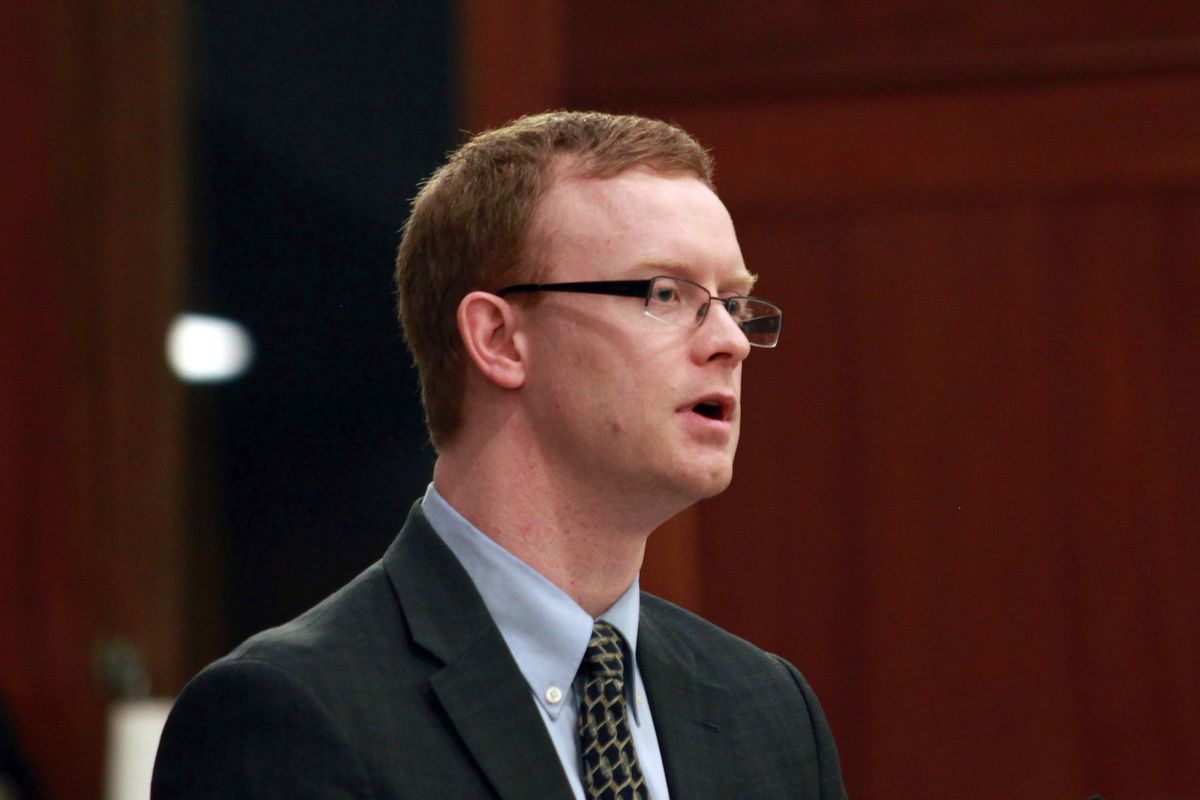 Wasilla Republican Rep. David Eastman speaks against the motion to censure him — a formal public reprimand — on the House floor Wednesday, May 10, 2017 at the Capitol in Juneau. (Nathaniel Herz / Alaska Dispatch News)

Wasilla Republican Rep. David Eastman speaks against the motion to censure him — a formal public reprimand — on the House floor Wednesday, May 10, 2017 at the Capitol in Juneau. (Nathaniel Herz / Alaska Dispatch News)

JUNEAU — The Alaska House on Wednesday took the rare step of approving a censure — a formal public reprimand — against Wasilla Republican Rep. David Eastman, who claimed last week that women in rural villages try to get pregnant so they can get a free trip to the city for an abortion.

The 25-14 vote came mostly along caucus lines, after Eastman gave a 20-minute speech on the floor in which he said he was sorry for his comments, but also argued that "we will not solve the true, real problems of our state by finding people to silence."

Fairbanks Democratic Rep. Scott Kawasaki told colleagues later it was "the worst apology ever," while Rep. Chuck Kopp, R-Anchorage, said it "drifted into political messaging." While Kawasaki voted for censure, Kopp did not.

The censure, sponsored by Anchorage Democratic Rep. Ivy Spohnholz, carries no weight beyond expressing the formal opprobrium of the House, and it places no restrictions on Eastman's future conduct.

But members of the largely Democratic House majority coalition, over nearly three hours of debate, said the censure was justified by Eastman's failure to provide documentation for his sensational claims — and by his refusal to issue an unequivocal apology. All 22 majority members voted in favor.

But most members of Eastman's Republican minority voted against the motion, with several saying they feared curtailing members' free speech. Of the 17 minority members in attendance — Nikiski GOP Rep. Mike Chenault was absent — Republican Reps. Gary Knopp of Kenai, DeLena Johnson of Palmer and Steve Thompson of Fairbanks were the only ones to vote for the censure.

"There's no limit on stupidity that any one of us can use in remarks that we raise on this floor," said Rep. Chris Birch, R-Anchorage. "That community responsibility or condemnation comes from the voters in our respective districts and the public that we serve."

The censure was the first one approved by either legislative chamber since 1994, when the state Senate acted unanimously against George Jacko.

Jacko was found by the Senate Ethics subcommittee to have used his position to seek "sexual favors" from a 17-year-old page, among other transgressions.

Along with the censure, the Senate stripped him of his committee posts, barred him from traveling at state expense and required him to attend anger management and communication training as part of a "male awareness program."

House Republicans said in a prepared statement the House had never censured a member before. While it condemned Eastman's comments as lacking a "factual backing" and for targeting rural women, it criticized the use of censure as setting a "dangerous precedent."

"Censure is reserved for conduct that is damaging and disruptive to the legislative process or implicates a criminal act or ethical violation," the statement said.

The House's censure of Eastman came with no additional penalties, and he continues to hold seats on several committees. Many of the members of the Republican minority rebuked Eastman on the floor Wednesday, but the caucus has not announced any disciplinary action against him.

Some Republicans said Wednesday they weren't sure Eastman's conduct rises to the level of the lawmakers who have been censured in the past.

"I don't really know the definition of censure," said Rep. George Rauscher, a Sutton Republican, adding that he'd read about it being used in response to acts like extortion and bribery. He added: "I don't know what the punishment should be. I don't know how to handle this."

But Democrats argued the House didn't need to show restraint when it came to Eastman's conduct.

"It's incumbent upon the Legislature to set the bar. This is the 21st century," House Speaker Bryce Edgmon, D-Dillingham, told reporters after the vote. "We don't make statements like that any more."