Can the Alaska Legislature ‘get to yes’ on taxes? Senate president says he’s ‘getting to no.’ 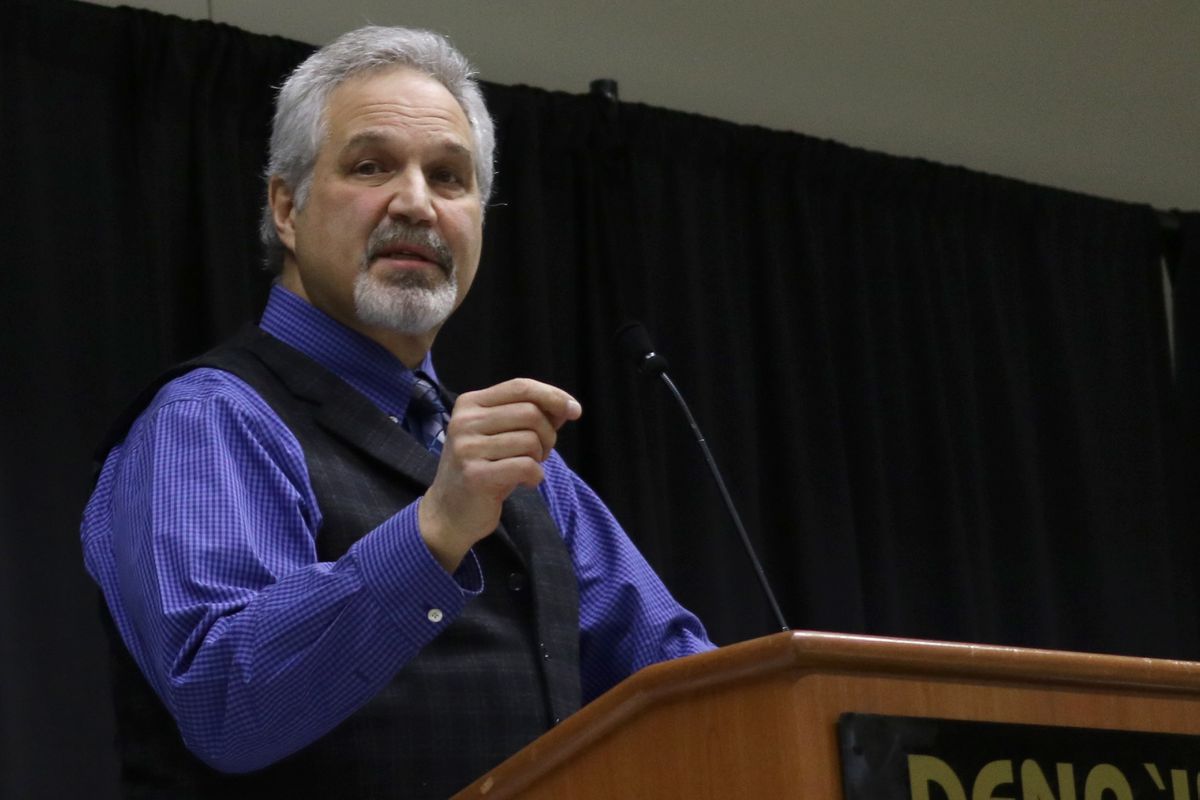 At a Thursday speech previewing the upcoming Alaska legislative session, Senate President Pete Kelly, R-Fairbanks, had a message for those asking elected leaders to "get to yes" on a deficit-reduction plan that includes taxes.

"I don't want to get to yes on a plan that takes money out of the private sector," Kelly said. "My goal this year is to get to no. If someone brings up the taxes, I'm getting to no."

Kelly and House Speaker Bryce Edgmon, D-Dillingham, delivered their "legislative previews" at an Anchorage breakfast meeting of the Resource Development Council, a pro-oil, mining, timber, tourism and fisheries group. The annual event is typically a platform for top lawmakers to lay out their priorities for the session, which starts Jan. 16 in Juneau.

The state's elected officials have been fighting for the past three years over how to solve a massive budget crisis stemming from a crash in oil income. Revenues are only projected to cover about half of this year's state spending, with the rest coming from nearly empty savings accounts.

For those wanting respite from the Legislature's recent gridlock, Thursday's speeches by Kelly and Edgmon didn't seem to offer much hope.

"I'm a compromiser," said Harry McDonald, an executive at shipping company Saltchuk. "But I think we probably have another stalemate coming."

The major decisions facing the Legislature this year aren't expected to differ much from the recent past: drafting the state's multibillion-dollar annual budget and coming up with a long-term plan to pay for it.

Kelly, who leads the Senate's Republican majority, and Edgmon, who leads the largely Democratic House majority, laid out different visions — both of the way state government is working and of how lawmakers should tackle the deficit.

Edgmon described state government, down to 24,100 employees in September from 26,900 in 2014, as "getting strapped" — to the point that development projects needing government approvals are at risk of being stalled.

"We have a lot of resource-development agencies, speaking of being cash-strapped, that are struggling to do their jobs," he said, ticking off the departments of natural resources, environmental conservation, fish and game, law, labor and commerce.

Edgmon explained why his caucus supports a broad-based tax measure like the one recently unveiled by Alaska Gov. Bill Walker. The House last year voted to levy a statewide income tax to raise some $700 million, but the Senate rejected it.

A deficit-reduction plan that depends primarily on budget cuts and investment earnings from the $63 billion Permanent Fund — like the one pushed by Senate majority members — doesn't give the state flexibility to respond to events like a stock market crash, unforeseen expenses or another downturn in oil prices, Edgmon said.

His caucus, he added, will negotiate on details, like giving the tax an expiration date or reducing it if oil prices rise.

"But we absolutely think it should go into place this year," he said, given that by the time it takes effect in two years or three years, "none of us have any idea where we might be."

Kelly, without attacking Edgmon or his caucus directly, reacted to that argument by saying a tax would torpedo Alaska's hopes of emerging from its recession.

Kelly blamed the state's deficit not on budgeting but on "environmental regulations and cottage-industry lawsuits."

"When you people have to deal with that, and then we say we're going to tax you on top of it, I've got a strategy for that. My new strategy: Mocking laughter," Kelly said.

If Kelly's majority is again successful in thwarting a tax, businesses will probably benefit in the short term, said McDonald, the transportation executive.

"But at some point we do need to figure out how to find a budget, and you should be doing that not eating up your savings account," he said.

The gulf between Kelly and Edgmon sounded wide Thursday. But not everyone left the event feeling pessimistic.

Beneath the "posturing" that audience members heard Thursday, there's actually a fair amount of agreement between the House and Senate majorities, according to Anchorage Rep. Jennifer Johnston, a member of the House Republican minority.

Both sides agree that lawmakers will need to spend some of the Permanent Fund's investment earnings on government services, she said. And they agreed last year on major changes to the state's system of paying cash subsidies to small oil and gas companies, she added.

"They have compromised," Johnston said. "The posturing that's going on now is what you're supposed to do. It's political debate."