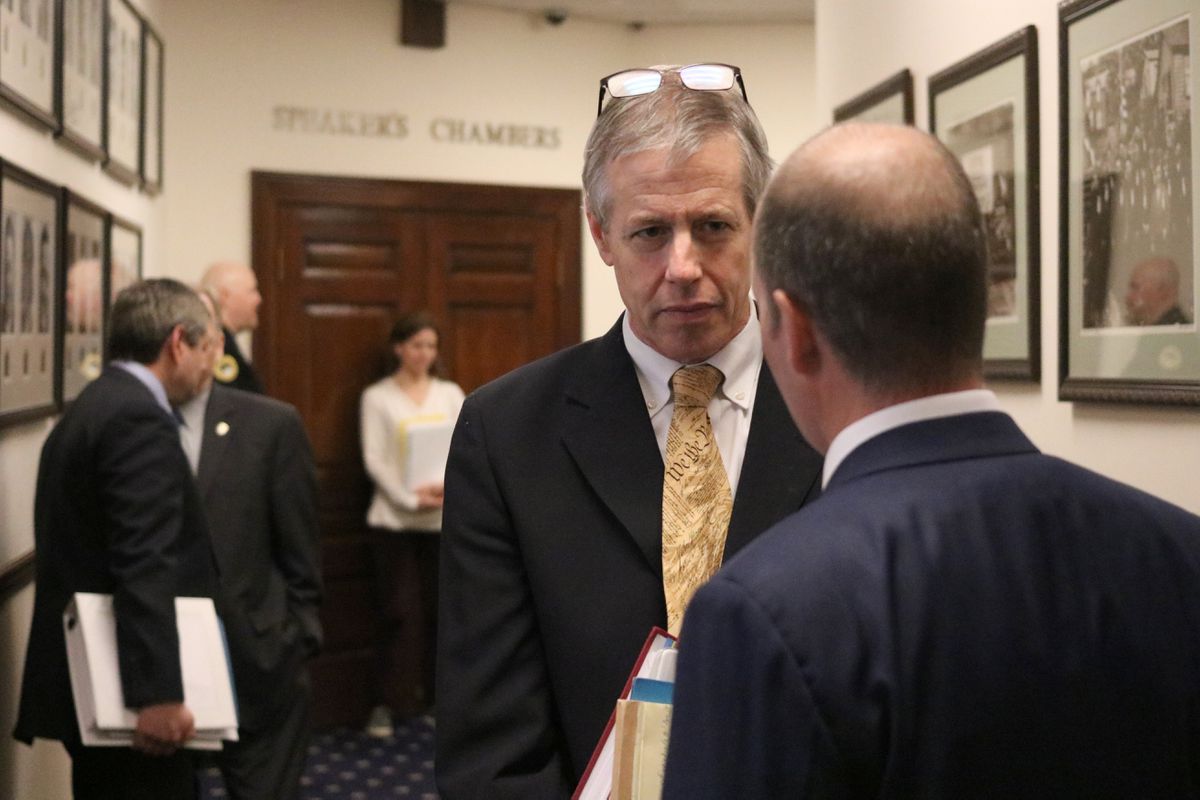 JUNEAU — The only gun control bill moving through the Alaska Legislature this year is dead, one of the lawmakers pushing it declared Thursday.

House Bill 75 is designed to reduce the risk of mass shootings by setting up new procedures to take guns from people deemed to be dangerous by judges and police officers.

But supporters said Thursday that with the legislative session nearing its end, they had failed to gain the endorsement of a critical interest group: the National Rifle Association.

"We're on the 87th day of the legislative session and we really should be finishing in 90 days," said Anchorage Democratic Rep. Matt Claman, who chairs the House Judiciary Committee, where the bill is stuck. "I can also count votes on the committee, and what I can see is that right now, in the current status, the bill would not pass."

Claman acknowledged last week that the bill had stalled as he negotiated with the NRA, which withheld its support from the latest draft.

At a Thursday afternoon meeting with reporters in his first-floor Capitol office, Claman said those talks had failed.

One of Claman's colleagues, Anchorage Democratic Rep. Geran Tarr, proposed the bill last year and gave it a new push this spring, after the Feb. 14 school shooting in Parkland, Florida, where 17 people were killed.

The measure has been frozen in Claman's committee since it was introduced. The committee held eight hearings on the legislation this year.

The bill would allow a judge to bar someone alleged to be dangerous from having guns — and, in urgent cases, give police power to seize the weapons.

The NRA's opposition centers on a provision to allow the judge to issue what are called "ex parte" orders to seize guns for 20 days.

Those orders could be made without first notifying gun owners, though only if special conditions are met: Judges would have to take a sworn statement from a police officer requesting the order, find probable cause to believe a person is dangerous and rule that "less restrictive alternatives have been tried and were ineffective."

A separate provision in the bill creates a process for less-urgent situations, in which judges can issue orders only after giving the subject an opportunity to appear at a hearing.

An NRA spokesman, Lars Dalseide, said last week that the organization doesn't support the bill because it lacks "due process" safeguards for gun owners.

"The NRA supports risk protection orders that respect due process rights and ensure those who are found dangerous receive the the mental health treatment they so dearly need," Dalseide said in a prepared statement.

The "bottom line," Claman said Thursday, is that "the NRA wasn't willing to support a bill that allowed the ex parte order to seize weapons."

The House is controlled by a largely-Democratic majority coalition, and many of its 22 members support HB 75.

But of the majority's three Republicans, two sit on the judiciary committee. That makes for a 5-2 GOP advantage on the committee and a tougher path for the bill, since conservatives are generally less likely to support gun control legislation.

"If they came out and supported a bill that the NRA didn't support, they risk in their next primary, if somebody challenges them, a flyer from the NRA that says they voted against the NRA," he said. "I'm realistic enough to know that that's a political challenge."

One Republican member of the committee, Wasilla Rep. David Eastman, said in an interview last week that he's strongly opposed to the bill and was working to defeat it.

But another Republican, Anchorage Rep. Chuck Kopp, said he and other GOP members of the committee were working on the legislation. There just wasn't enough time this year to resolve the committee's disagreements over HB 75's many details, he added.

Among the unsettled issues, according to Kopp and Claman: the definition of a "dangerous" person, possible mental health treatment for people whose guns would be seized and provisions to automatically repeal the legislation after a certain amount of time.

"On something like this, we really need to make sure we have not had a rushed policy discussion," Kopp said. "On a heavy public policy lift there is always an answer that is clear, simple and wrong."

Kopp said he opposes the current version of HB 75, adding that committee members "did not feel we had resolved the due process question."

The NRA's position matters to him, Kopp said. "But that does not mean that my vote is predicated on their position," he added.

Claman, a lawyer, said he doesn't think his ideas violate the rights to due process guaranteed by the Alaska and U.S. constitutions.

Claman said he plans to continue working on the legislation even after lawmakers leave Juneau. So did one of his loudest critics on the judiciary committee, Eagle River Republican Rep. Lora Reinbold — suggesting that there could be a bipartisan consensus to continue debate next year on the ideas contained in HB 75.

"No one wants guns to get into the hands of people that have intent to do harm to others or themselves," Reinbold wrote in a Facebook post. "We are thankful the discussion started, and we look forward to continuing the discussion in the near future to ensure public safety."