In public testimony, a surge of support for cuts — to the Permanent Fund dividend 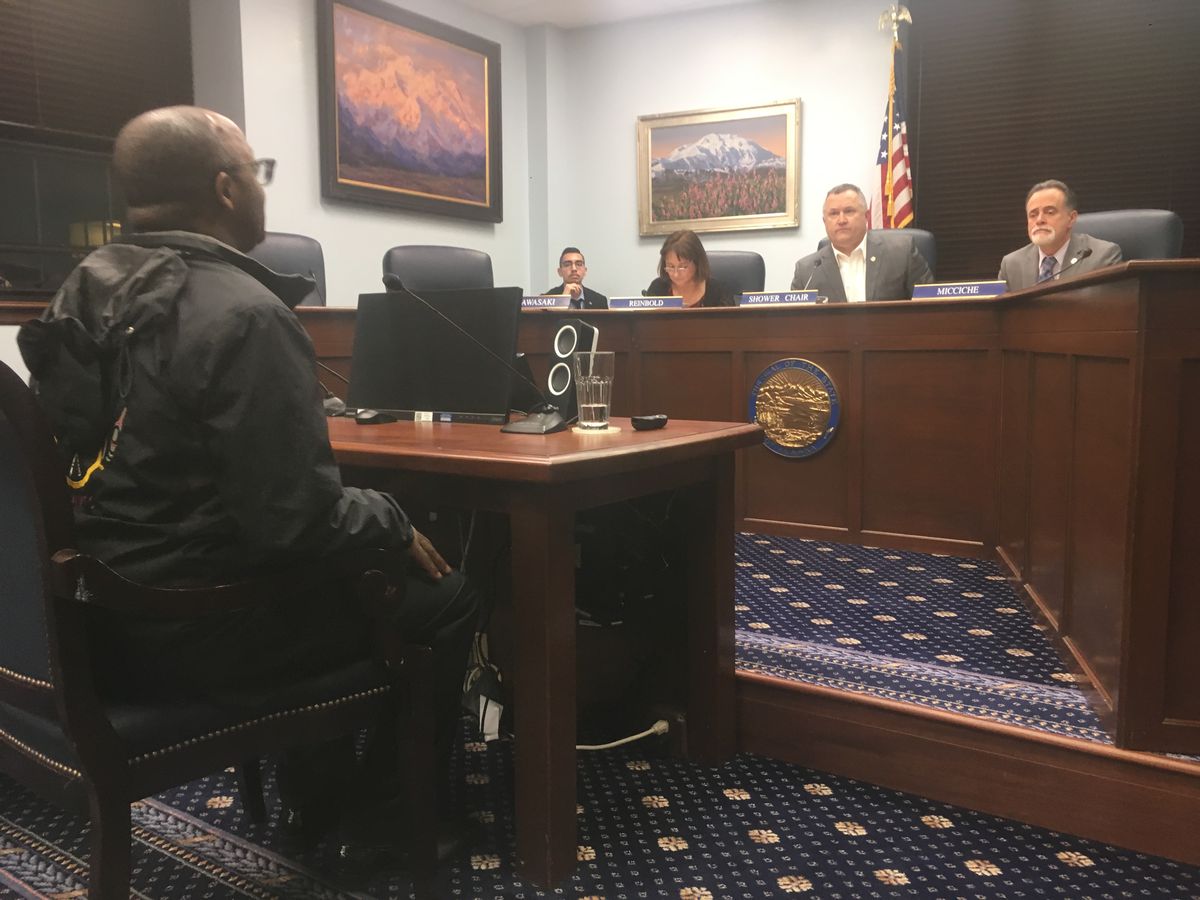 Ralph Watkins, superintendent of Hoonah City Schools, testifies in opposition to Senate Bill 23 and Senate Bill 24 on Thursday night, Feb. 28, 2019 in a hearing of the Alaska Senate's State Affairs Committee. Watkins told lawmakers that if Gov. Mike Dunleavy's proposed budget cuts are accepted by the legislature, it would mean the end of Hoonah's school. (James Brooks / ADN)

Ralph Watkins, superintendent of Hoonah City Schools, testifies in opposition to Senate Bill 23 and Senate Bill 24 on Thursday night, Feb. 28, 2019 in a hearing of the Alaska Senate's State Affairs Committee. Watkins told lawmakers that if Gov. Mike Dunleavy's proposed budget cuts are accepted by the legislature, it would mean the end of Hoonah's school. (James Brooks / ADN)

JUNEAU — On the 42nd anniversary of the first deposit into the Alaska Permanent Fund, dozens of Alaskans urged members of the Alaska Senate State Affairs Committee to reduce the Permanent Fund dividend if it means greater support for education and other state services.

For two hours Thursday evening, Alaskans testified for and against a proposal from Gov. Mike Dunleavy to pay portions of the dividend vetoed by former Gov. Bill Walker in 2016 and cut by the Alaska Legislature in 2017 and 2018. Senate bills 23 and 24, proposed by the governor, also appropriate money for ordinary dividends through 2023.

Though Thursday’s hearing was supposed to be about the dividend proposal, it turned into a proxy battle for the state budget after the governor, legislators and state unions urged supporters to call in.

“I can’t take my PFD and go and buy a teacher, so I’m opposed to SB 23 and SB 24,” said Jim Cheydleur of Fairbanks, summarizing the arguments of education advocates throughout the evening.

“I hope you will remind yourselves before you vote, of the voice of the people in the last election,” he said.

His perspective was countered by Vikki Jo Kennedy of Kodiak, who called herself a disillusioned Dunleavy supporter.

“I love Dunleavy … but now I realize he bought this state by offering money to the people. He offered everybody basically $3,600,” she said.

Dunleavy campaigned for governor on a promise to retroactively pay the difference between the traditional dividend payment formula (used from 1982 to 2015) and the payments actually given to Alaskans from 2016 to 2018, saying that because the formula was in law, it should be paid.

“When we campaign on commitments, you have to fulfill those commitments, and when you have laws in place, you should follow those laws,” he said when he unveiled the proposal.

Some lawmakers say they are concerned about the cost of the payback plan, and it does not appear to have majority support in the House.

According to a Feb. 19 memo from the Alaska Permanent Fund Dividend Corp. to Sen. Donny Olson, D-Golovin, the payback plan will cost the Permanent Fund $1.95 billion over three years, plus the loss of some future investment revenue, because the fund will have less money to invest.

In the memo, the APFC trustees said the governor’s proposal provides stable rules for Permanent Fund spending, something trustees have asked for.

“That means the APFC supports following, on a go forward basis, the constitutional and statutory rules provided under Alaska law for payment of dividends and inflation proofing,” the memo states.

On Thursday night, the foremost issue on the minds of testifiers — particularly from Sitka — was the protection of education funding, even if it means a smaller dividend.

“I am upset. The exceptional education of my two children might be replaced by a fat PFD check,” said Collauna Marley of Sitka.

Sue Litman of Sitka said, “It is sometimes nice to receive free money. However, now is not one of those times.”

Some testifiers — including people for and against the governor’s proposal — said any reduction of the Permanent Fund dividend amounts to a regressive tax on Alaskans and called for a statewide income tax or higher taxes on oil producers in order to keep the dividend high.

Morris Nassuk of Koyuk testified that in his area, there is very little private-sector economy.

“We’ve depended on the dividend for a long time,” he said. “I’d rather you guys just tax the oil companies.”

He had harsh words for those testifying on education issues.

“All these teachers that are testifying, they’re just defending their jobs and they haven’t done anything for us in rural Alaska,” he said.

By the time testimony opened at 6 p.m., 64 Alaskans were already in the queue to deliver testimony by phone and another 10 were present in person. Dozens more called in as testimony opened. The queue had more than doubled in length 30 minutes into the hearing, and more than 100 people spoke before it ended.

To allow as many people to speak as possible, committee chairman Sen. Mike Shower, R-Wasilla, limited each caller to one minute, sometimes cutting testifiers off with an apology.

He said he wasn’t certain whether Thursday’s testimony represents Alaskans’ actual divide, but it seemed to bring new voices to the discussion.

“We’re seeing many more people speaking out who may have been quiet before,” he said.

Does the testimony matter?

“Just the fact that I’m sitting here should answer that question,” said Sen. Click Bishop, R-Fairbanks, who isn’t a member of the state affairs committee but arrived before the meeting and stayed until it ended. Senate Majority Leader Mia Costello, R-Anchorage, also listened to part of the testimony in person.

“We’ll do that as long as people are calling in," Shower said.