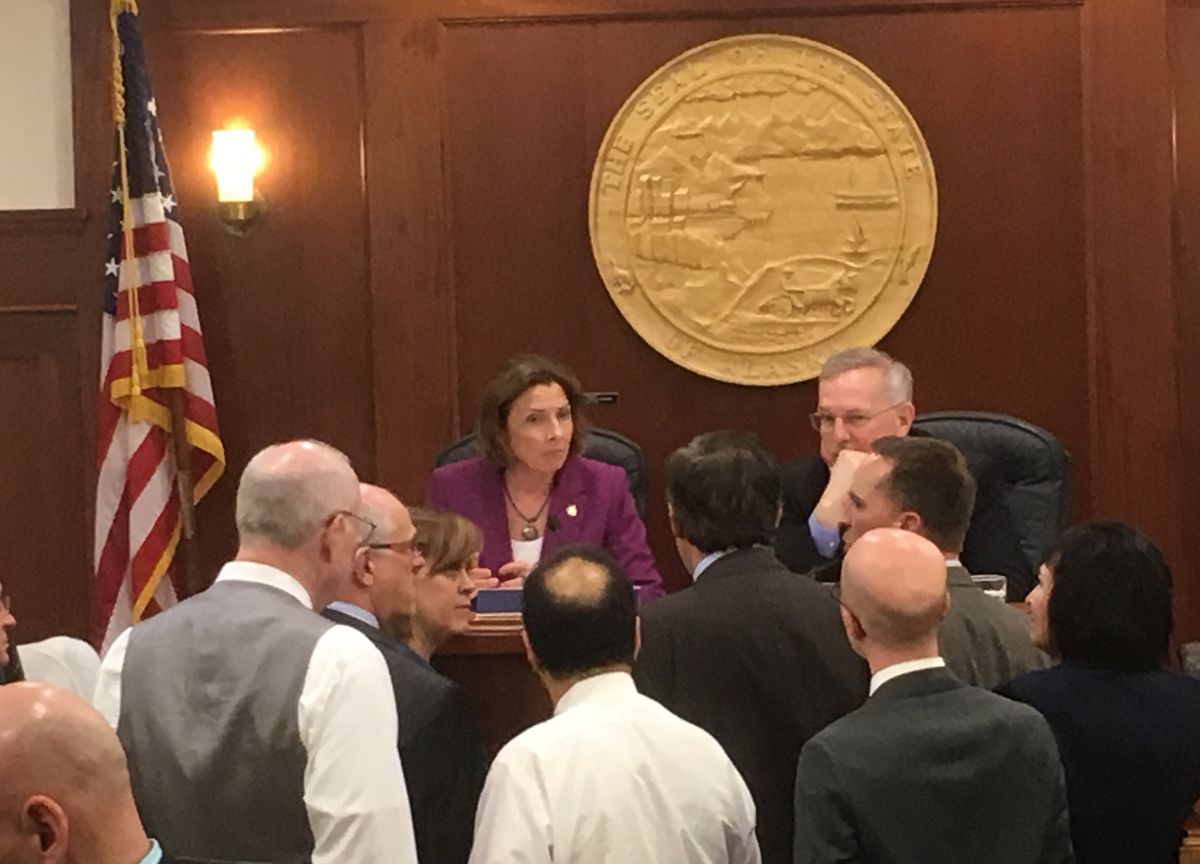 Members of the Alaska Legislature crowd around the rostrum containing Senate President Cathy Giessel, R-Anchorage, and Speaker of the House Bryce Edgmon, I-Dillingham, as they consider whether to table the nomination of Karl Johnstone to the Alaska Board of Fisheries. (James Brooks / ADN)

Members of the Alaska Legislature crowd around the rostrum containing Senate President Cathy Giessel, R-Anchorage, and Speaker of the House Bryce Edgmon, I-Dillingham, as they consider whether to table the nomination of Karl Johnstone to the Alaska Board of Fisheries. (James Brooks / ADN)

JUNEAU — The Alaska Legislature rejected one appointment and tabled another by Gov. Mike Dunleavy to state boards and commissions after lawmakers said the two appointees may have committed misconduct not previously disclosed in confirmation hearings.

Meeting in joint session Wednesday to consider officials for state boards and commissions, lawmakers rejected Karl Johnstone for the Alaska Board of Fisheries and tabled a vote on Scott Flamme for the state board of veterinary examiners.

Speaking on the House floor, Rep. Ivy Spohnholz, D-Anchorage, said she heard from two women who said Johnstone made “inappropriate and unwelcome sexual comments” to them while previously serving on the board.

Spohnholz said the women “were not willing to testify on the record because of the fear of retribution.”

She later clarified by text message that they are afraid they would be the target of retribution if they made their claims public.

Sen. John Coghill, R-North Pole, and Rep. Sara Rasmussen, R-Anchorage, said it was inappropriate for lawmakers to discuss those allegations without giving Johnstone a chance to respond.

That vote to table passed 28-27 with several members of the joint session absent, but lawmakers returned to the matter later in the evening and conclusively voted down Johnstone, 24-33.

Johnstone’s nomination had already been controversial and was fiercely opposed by the state’s commercial fishermen. He was strongly supported by sport and personal-use fishermen.

Spohnholz said she learned of the allegations Tuesday.

When asked whether it was fair to levy accusations without giving Johnstone an opportunity to respond, Spohnholz said, “I think the legislative process is not well-suited to handling issues of sexual harassment."

Later in the evening, Rep. Geran Tarr, D-Anchorage, asked lawmakers to reverse a unanimous vote appointing Scott Flamme to the state board of veterinary examiners. Speaking on the floor, she said she had discovered multiple domestic violence restraining orders in his history on Courtview.

The circumstances of those orders were not immediately clear Wednesday evening, and Rasmussen asked lawmakers — as they had done with Johnstone — to table Flamme’s nomination rather than vote up or down.

By text message, Tarr said she doesn’t know what the Courtview records indicate and “was surprised by Rep. Rasmussen’s motion to table it, but I guess others felt concerned, too.”

In a later text message, Tarr said it is possible the restraining orders may have been dismissed, but she felt raising the issue on the floor was the only way to have it heard before a final vote.

Lawmakers could take up Flamme’s nomination during another joint session, but if they do not, the House and Senate clerks said Wednesday night that they believe (based on a reading of state law) his nomination would expire with the end of this year’s legislative session.

The nominations of Johnstone and Flamme were among 104 cabinet, board and commission officials considered by the Alaska Legislature in a joint House-Senate session Wednesday. Most were accepted during floor debates that concluded after more than seven and a half hours.