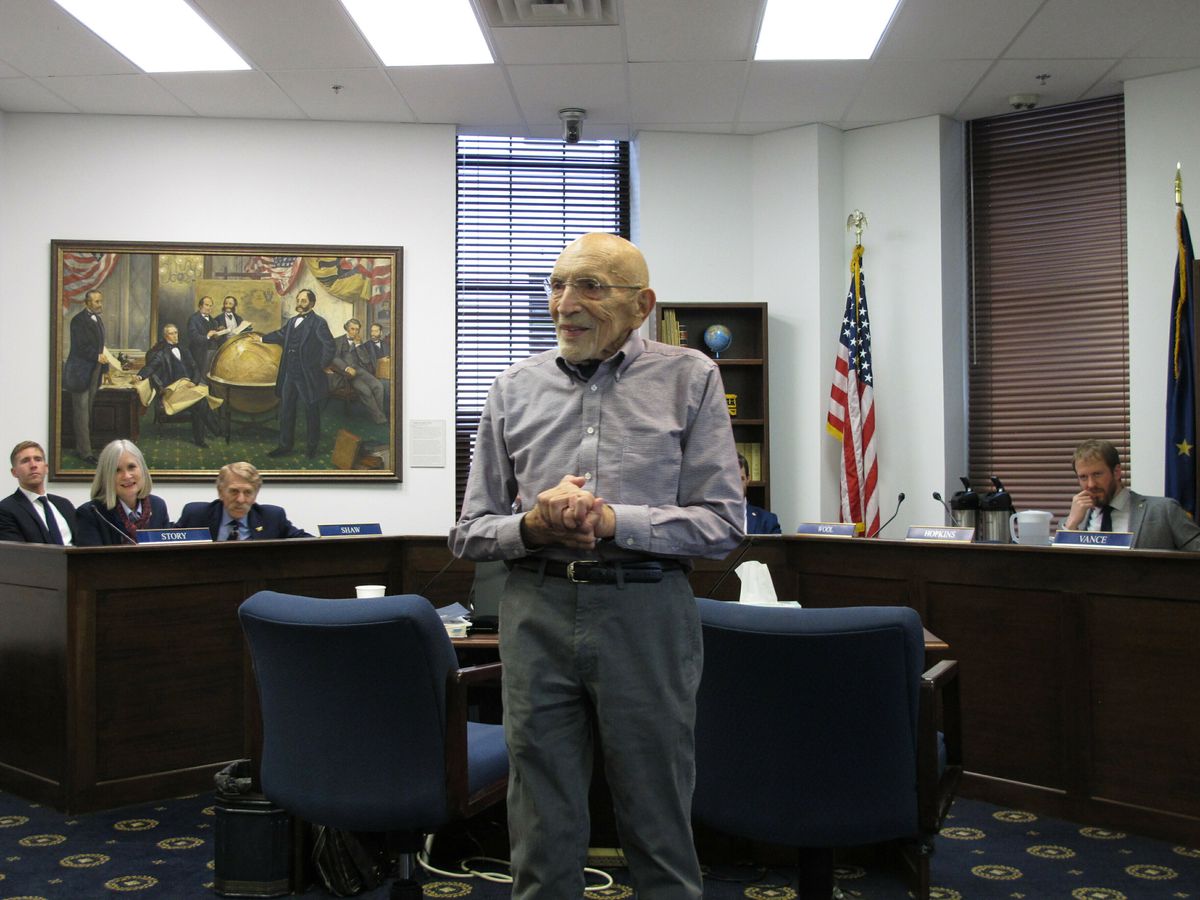 Victor Fischer, the last surviving delegate of the Alaska Constitutional Convention, addresses members of the audience after giving testimony to a state House committee on Tuesday in Juneau. Fischer spoke about changes to the state Constitution proposed by Gov. Mike Dunleavy. (AP Photo/Becky Bohrer)

Victor Fischer, the last surviving delegate of the Alaska Constitutional Convention, addresses members of the audience after giving testimony to a state House committee on Tuesday in Juneau. Fischer spoke about changes to the state Constitution proposed by Gov. Mike Dunleavy. (AP Photo/Becky Bohrer)

JUNEAU — Victor Fischer, the last surviving delegate to Alaska’s 1955-1956 Constitutional Convention, testified Tuesday against a proposed constitutional amendment dealing with taxation, telling lawmakers it is poorly written and would handicap the state in the future.

“If we had had something like that at the time of the construction of the trans-Alaska oil pipeline, state government would have been incapable of dealing with the changes that were taking place,” Fischer told a hearing of the House State Affairs Committee.

Fischer’s status as the last living link to the Alaska Constitution granted him extraordinary deference from the committee, which allowed him to speak for almost an hour with few interruptions.

As Rep. Zack Fields, D-Anchorage, explained, Americans “can’t ask Thomas Jefferson” why he wrote certain things in the Declaration of Independence, but they can speak to someone who was part of the process for one of Alaska’s foundational documents.

The amendment under discussion is contained in House Joint Resolution 5 and would require voter approval of all new taxes or tax increases. The amendment was proposed by Gov. Mike Dunleavy, but as Fischer pointed out, the state constitution doesn’t give the governor a role in amending the constitution.

“It’s your amendment if it goes before the people,” he told lawmakers. “It’s not the governor’s.”

Fischer previously stated his opposition to all three amendments in an op-ed submitted to the Daily News, and on Tuesday he expanded upon his position with a focus on the taxation amendment.

To lawmakers, he said the effect of the amendment is to freeze state taxes in place, regardless of whether or not they are appropriate.

He pointed out that when the Alaska Constitution was written, “big oil” hadn’t yet been discovered, yet the document was flexible enough to serve as the basis for the state’s resource wealth today.

He alluded to the popular debate over Senate Bill 21, the oil tax reform legislation that passed the Legislature in 2013 and was upheld at the ballot box in 2014.

Are Alaskans sure, he asked, if that is the appropriate oil tax system now and forever?

“It is freezing something at this moment of time instead of leaving it to future legislatures, to future actions,” he said.

Fischer also had tough words for the text of the amendment itself. He pointed out that the constitutional convention had an entire committee devoted to writing things simply and clearly for the public. The taxation amendment is too long and written poorly, he said.

“Do it in one sentence. Don’t do pages in the constitution, because then you get involved in minutiae, and future legislators will have to come and clean up the mess that you’ve made,” he said.

Regardless of his opinion, Fischer said, the guiding hands on the language of any amendment are those of the Legislature.

“This is your responsibility. You decide — not the governor, not the Supreme Court — what goes before the people,” he said.

Correction: A previous version of this article incorrectly stated that Thomas Jefferson was the author of the U.S. Constitution. He authored the Declaration of Independence.