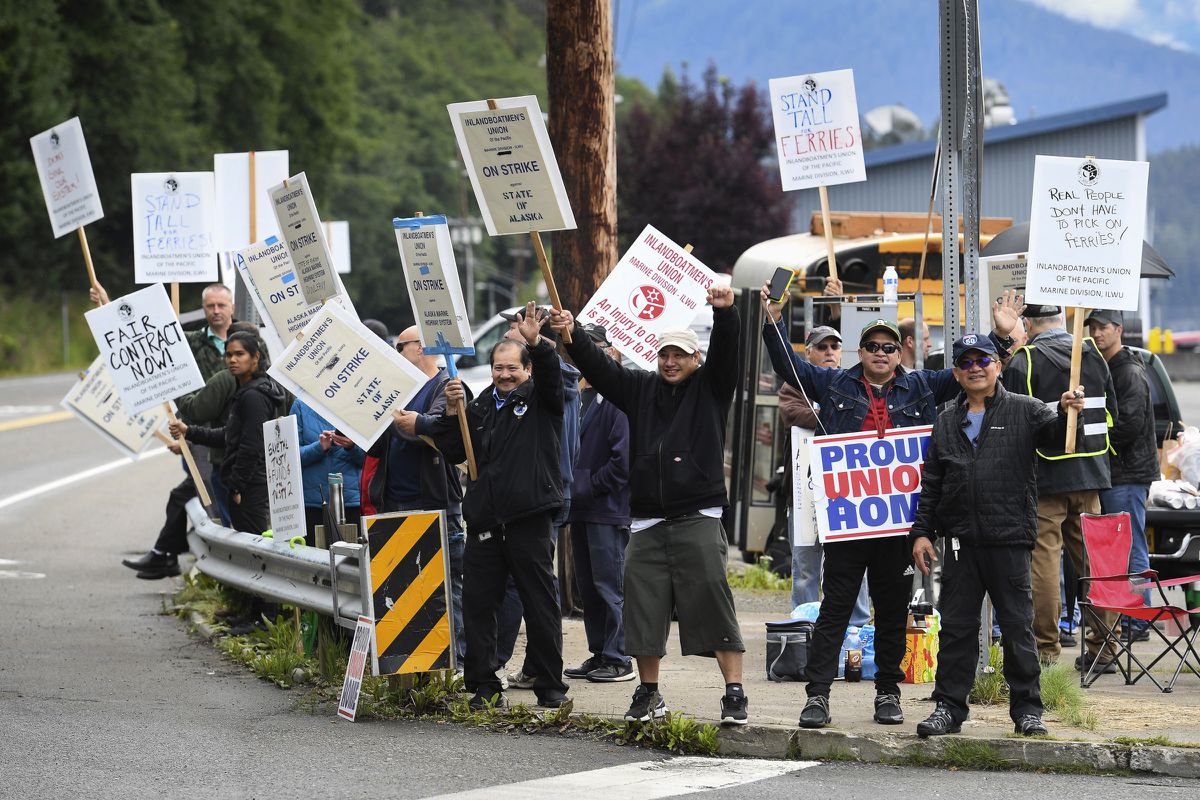 Members of the Inland Boatmen's Union of the Pacific picket in front of the Auke Bay Terminal in Juneau, Alaska, Thursday, July 25, 2019. The union called a strike on Wednesday over failed negotiations with Gov. Mike Dunleavy's administration. State officials said Thursday more than $580,000 in fares has been refunded to passengers affected by striking ferry workers. (Michael Penn/The Juneau Empire via AP)

Members of the Inland Boatmen's Union of the Pacific picket in front of the Auke Bay Terminal in Juneau, Alaska, Thursday, July 25, 2019. The union called a strike on Wednesday over failed negotiations with Gov. Mike Dunleavy's administration. State officials said Thursday more than $580,000 in fares has been refunded to passengers affected by striking ferry workers. (Michael Penn/The Juneau Empire via AP)

JUNEAU — As a statewide strike cripples the Alaska Marine Highway System, coastal lawmakers say they’re worried that the walkout will have long-term effects on the state’s ferry system and encourage Gov. Mike Dunleavy to further slash the state agency’s budget.

“It’s ridiculous,” said Sen. Bert Stedman, R-Sitka. “I know the opponents of the marine highway would like nothing better than to shut it down.”

Rep. David Eastman, R-Wasilla, didn’t have much to say about the strike when asked for his thoughts, but he said the actions of the workers might speak for themselves: “If even the folks who work the ferries think it’s not life or death to not have ferry service, then maybe it’s not.”

In February, Gov. Mike Dunleavy proposed cutting $97 million from the ferry system’s $140 million budget. At that level of funding, the system would have had to stop sailing Oct. 1. The Legislature revised Dunleavy’s proposal but still accepted nearly $44 million in cuts, according to figures from the nonpartisan Legislative Finance Division.

Though less than half of what Dunleavy originally proposed, those cuts have been significant enough that draft schedules for the winter and spring show Cordova without service for more than six months and other coastal communities without service for shorter periods of time. For a small stretch, only one of the state’s 11 ferries will be operating. The rest will be laid up for overhaul or because there isn’t enough money to run them.

The governor has suggested that privatization could be in the cards, and the state has hired a consultant to determine the future of the system.

“I think it works right into his hand of eliminating the marine highway system,” Sen. Gary Stevens, R-Kodiak, said about Dunleavy and the strike. “It just could not be more unfortunate timing to happen at this point.”

“The Haines state fair begins today, so it’s one of those days when the ferry was fully sold out and lots of people moving in the district,” she said.

John MacKinnon, commissioner of the Alaska Department of Transportation, said in a call with reporters Wednesday that the strike’s timing means significant lost revenue for the ferry system, which in turn will have budget consequences. Of the $56 million in the ferry system’s budget reserved for operations, $26 million is supposed to come from ticket sales, according to Legislative Finance Division figures.

“July and August are our big revenue months,” MacKinnon said. “Without the revenue from the rest of July and August, should this continue, it’s really going to impact our ability to operate next winter and spring.”

Meadow Bailey, special assistant to MacKinnon, wrote by email, “Historically, AMHS grosses $1.5 million per week during the summer months. This strike, which the state believes is illegal, will negatively impact the AMHS budget. Since yesterday, we’ve refunded $1,176,918 in passenger fares. With the current budget deficit, this is money that could be used to provide service to communities.”

On Wednesday, Hannan was one of many House lawmakers who voted in favor of a budget amendment from Rep. Louise Stutes, R-Kodiak, that would add $5 million to the ferry system’s budget. That increase, equivalent to slightly more than 5% of the system’s reduced budget, would have to be approved by the Senate and governor to become law.

“I just think it’s very ill-timed and ill-advised,” Stutes said of the strike.

Sen. Jesse Kiehl, D-Juneau, winced and knocked his head against an office doorjamb when asked his thoughts on the cuts.

“I think we need ferry service,” he said. “My phone calls today will be urging everyone to do what they have to do to get people back to work and vessels running.”

Rep. Sarah Vance, R-Homer, said she doesn’t know what will happen as a result of the strike, but she believes the law of supply and demand might have an answer.

“I think this would just encourage the private sector,” she said. “Regardless of what happens, the private sector can fill in the gaps. They can see an opportunity where the state falls short … and provide services for those communities.”