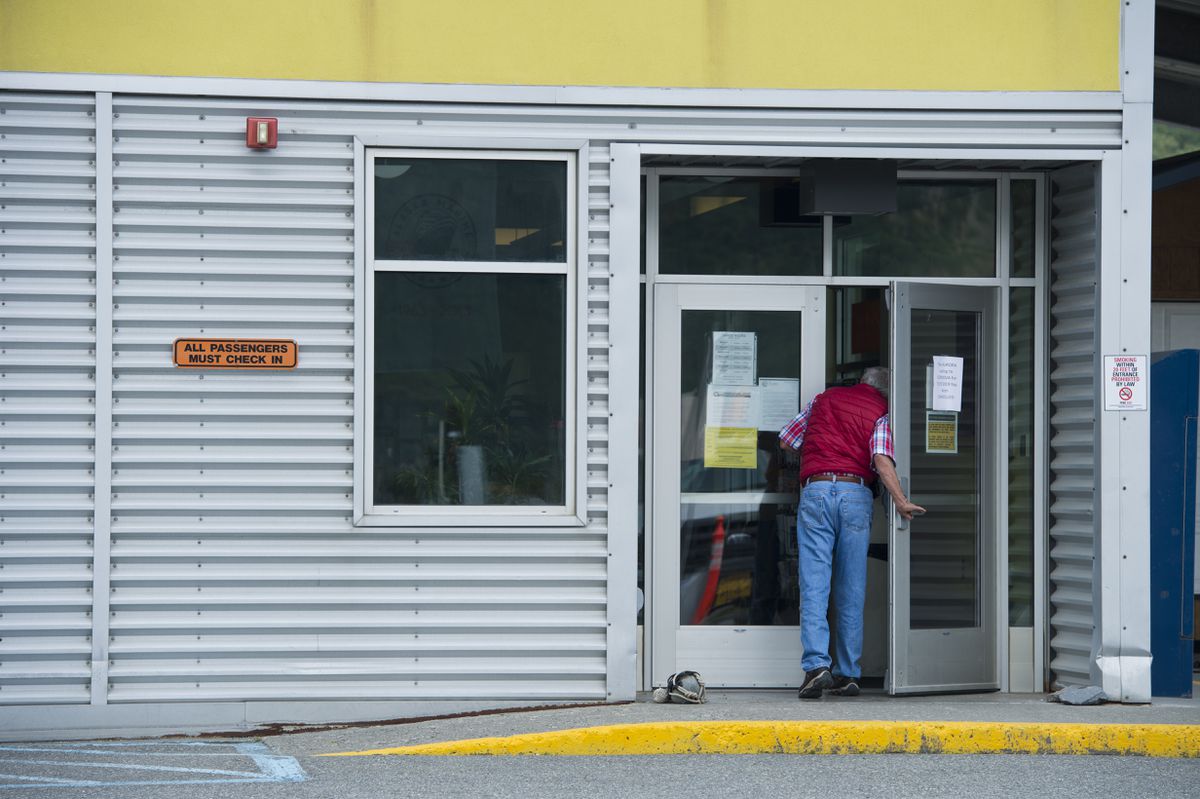 Fred Bryant, of Fayetteville, Tennessee, peeks in the Alaska Marine Highway System office in Whittier on July 25, 2019. Bryant and his traveling companions hope to travel on the ferry system next week. (Marc Lester / ADN)

Fred Bryant, of Fayetteville, Tennessee, peeks in the Alaska Marine Highway System office in Whittier on July 25, 2019. Bryant and his traveling companions hope to travel on the ferry system next week. (Marc Lester / ADN)

The Alaska Marine Highway System’s ferry network was halted for a third day Friday as hundreds of workers with the Inlandboatmen’s Union of the Pacific continued their strike over contract negotiations with the state.

Marine highway vessels “will not be sailing until further notice,” the state said on its website. By Thursday afternoon, all the state’s ferries were docked.

The shutdown has rendered unusable a crucial artery for moving people and goods around a large span of coastal Alaska. Vessels that move along the marine highway’s 3,500-mile route serve more than 35 coastal communities, many of which are not accessible by road. The ferries also carry vehicles and freight.

On Thursday, some people were trying to figure out how to get building supplies and other goods in and out of their towns, said Robert Venables, executive director of Juneau-based economic development group Southeast Conference.

“My phone and email have been blowing up since yesterday,” he said Thursday. The impact on the Southeast Alaska region is “severe, and it’s soon to be dramatically so,” he said.

One such impact is on the 51st annual Southeast Alaska State Fair in Haines, which started Thursday and runs four days. The fair is the “capstone for the economy” in that community, Venables said.

Volunteers for the fair come from all around the region. Now some can’t make it, said the event’s executive director, Kari Johnson. Entertainers scheduled to perform were set to arrive via ferry. Staff had to scramble to get them booked on last-minute flights.

And then there are vendors who arrived with their food carts and merchandise on the ferry Wednesday but now aren’t sure how they’ll leave.

“It was a little bit stressful for sure,” Johnson said. “We kind of went into survival mode.”

Barry Morrison is general manager of S.O.S. Value-Mart, a general store in Kake, and Trading Union, a store in Petersburg. He runs materials between his stores on the ferry. On Thursday, he found himself and his truck marooned in Kake without a way to get back to Petersburg.

In Cordova, the summer fishing fleet plus the families and equipment that go along with it arrived via ferry.

“How do they get home?” said Mayor Clay Koplin. “Maybe at four, five, six times the expense.”

Ferry communities were already facing state budget cuts that would reduce or stop service for parts of the year. This week’s sudden shutdown is “adding a little mess onto a bigger mess,” Koplin said.

“People were already starting to cram their doctor’s appointments, business trips into what’s left of the ferry schedule,” he said.

The IBU’s last three-year contract expired in 2017, and the union has been working under interim agreements since then. Mediation under both former Gov. Bill Walker and current Gov. Mike Dunleavy has not resulted in an agreement.

The state has said the IBU strike is illegal, due to a provision that was included in the union’s demands. While the union said its demands didn’t include a violation, it changed its proposal, but the state still sees the stoppage as unlawful.

Members of the union include pursers (who load passengers and take tickets), seamen, cooks, housekeepers, engineers and more.

The ferry system has 11 ships, with nine in service: Aurora, Columbia, Kennicott, LeConte, Lituya, Malaspina, Matanuska, Tazlina and Tustumena. The state is reaching out to ticketed passengers to work with them to reschedule or refund tickets, according to its website.

“AMHS passengers who are stopped mid-voyage will have their full fares refunded," Meadow Bailey, special assistant to Department of Transportation commissioner John MacKinnon, said by email Wednesday. "The state is not paying for airfare, but passengers can use the ticket refund to pay for any additional travel.”

By Friday morning, the state had canceled reservations for more than 3,000 people and more than 750 vehicles, MacKinnon said during a phone call with news media.

Fare refunds from the state totaled about $1.2 million as of Thursday evening, Bailey said in an email. Nearly 4,500 passengers were booked to travel in the coming week, and the state is working to cancel those as needed.

There were 153 passengers and 74 vehicles that had been offloaded from vessels but were “stuck with no road to drive to their final destination” as of about 6 p.m. Thursday, Bailey said. Most of those were in Ketchikan and were en route to Bellingham.

Alaska Airlines rerouted a Thursday flight to get a group of people from Juneau to Wrangell. The company is monitoring the situation, spokesman Tim Thompson said, and “when possible, we’ll add capacity or reroute, to get people moved.”

Through Aug. 4, Alaska Airlines is also offering flights in Southeast Alaska at cheaper rates than they normally would be this close to the departure date, Thompson said.

Smaller airlines are helping when they can, too. Harris Aircraft Services, based in Sitka, usually only makes trips between there, Gustavus, Juneau and Haines with its two planes. But this week it has also flown to Skagway, and people have asked if the company can add flights to Ketchikan too, said owner Scott Harris.

“People are reaching out, going all over Southeast trying to find a solution,” he said.

Debra Schnabel, borough manager in Haines, said that private company Allen Marine has worked to assist with the fair’s situation by helping people get in and out. But the loss of tourist revenue in the long run is also a concern should the strike continue, she said.

In addition to moving more passengers, Harris said his company is moving more freight than usual. He senses desperation from vendors in Haines trying to get through the fair, a significant source of revenue. One man in Haines needed several jugs of cooking oil Thursday, and Harris’ company got it to him.

“We’re not talking a can of Crisco,” Harris said.

The disruption has also attracted national attention. Former Vice President Joe Biden, who is also running for president in next year’s election, tweeted about the strike Friday.

The marine transit system in Alaska is vital to rural communities—but faces draconian cuts in funding. IBU is on strike to ensure this lifeline for Alaskans will continue to serve communities from Ketchikan to Kodiak. The governor must restore full funding immediately. @ILWU

“The marine transit system in Alaska is vital to rural communities — but faces draconian cuts in funding,” Biden said on Twitter. “IBU is on strike to ensure this lifeline for Alaskans will continue to serve communities from Ketchikan to Kodiak. The governor must restore full funding immediately.”

Contract negotiations between IBU and the state have been ongoing for years, since before the current budget battle in Juneau. However, IBU during this strike has cited recent budget cuts to the state’s ferry service among its concerns.

Referring to Biden’s comment about “draconian cuts,” IBU board vice chair Robb Arnold said: “No, that’s not why we’re striking. It’s because we haven’t had a contract ... but it’s great that Joe Biden is taking notice of what’s going on in Alaska.”

Suspended service has already cost some Alaskans money. Sitka resident Hal Spackman had planned to go to the fair in Haines with his family and friends. They flew to Juneau, where they were set to then take the ferry. But Thursday they remained stranded in Juneau, spending more money on transportation and lodging than they had anticipated.

“It’s been, not just a personal inconvenience. It’s been a financial challenge,” Spackman said.

He’s lived in Southeast since 1980, and said he can only imagine how frustrating the ferry stoppage must be for tourists who don’t understand the region’s unique reliance on the marine highway.

“It isn’t just the people going to the fair,” he said. “It’s a whole system that people learn to live with in Southeast Alaska that had the rug pulled out from under it.”

This week’s strike is the first by the IBU’s ferry system members since 1977. That strike lasted 20 days. The IBU represents about 430 workers in Alaska’s ferry system.

The state’s official Instagram account for the marine highway system had a handful of posts Thursday directing people toward other companies that could help with logistical hurdles from the stoppage.

Cordova resident Theresa Tanner took the ferry to Whittier with her family Wednesday before the strike began, she said in an email. She’s hoping they’ll get home without having to leave the car behind in Anchorage for some unknown amount of time.

“There’s no good way home for us without the (Alaska Marine Highway System),” she said. “This may have just become an uncomfortably expensive trip.”