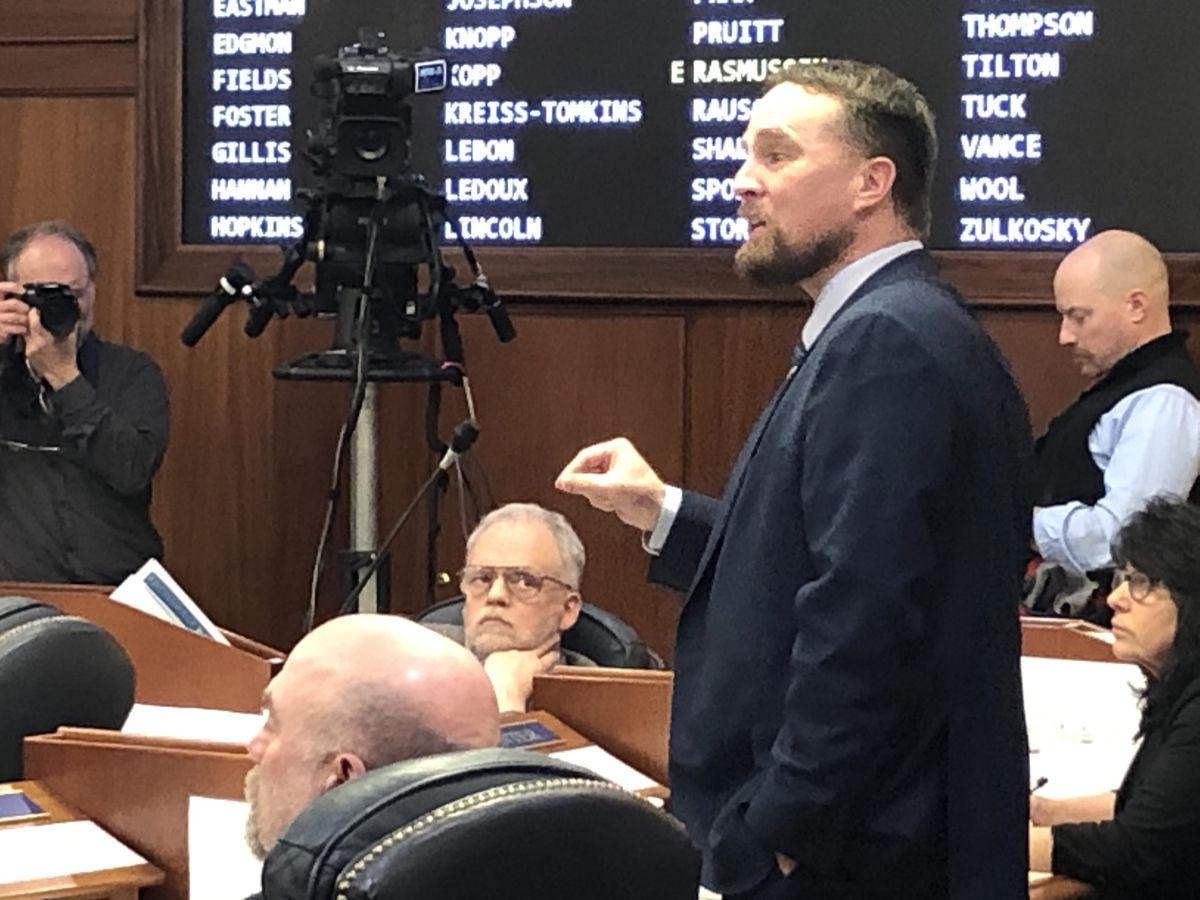 Rep. Ben Carpenter, R-Nikiski, speaks on the floor of the Alaska House of Representatives on March 18, 2020. (James Brooks / ADN)

Rep. Ben Carpenter, R-Nikiski, speaks on the floor of the Alaska House of Representatives on March 18, 2020. (James Brooks / ADN)

JUNEAU — A Nikiski Republican lawmaker opposed to pandemic safety measures at the Alaska Capitol compared them to Nazi Germany’s labeling of Jews in an email exchange Friday with fellow members of the Alaska House of Representatives.

When lawmakers return to Juneau on Monday, they will be required to undergo a health screening. Those who pass the screening will be asked to wear a sticker.

“How about an arm band that won’t fall off like a sticker will?” Rep. Ben Carpenter wrote in a message copied to all 40 members of the Alaska House. “If my sticker falls off, do I get a new one or do I get public shaming too? Are the stickers available as a yellow Star of David?”

“Ben, This is disgusting. Keep your Holocaust jokes to yourself,” wrote Rep. Grier Hopkins, D-Fairbanks.

Rep. Andy Josephson, D-Anchorage, said, “I don’t think a tag that we’re cleared to enter the building is akin to being shipped to a concentration camp. It’s more akin to needing a boarding pass when you get through TSA. This is that.”

“We should all be concerned about the implications of being labeled as ‘non compliant’ or wearing a badge of ‘compliance,’” she wrote in response to Hopkins.

The exchange was first published by Jeff Landfield of the Alaska Landmine.

By phone, Carpenter said he didn’t intend to “rile somebody."

“I certainly have no ill will toward the Jewish nation and the Jewish people in our country,” he said.

He said he believes public health restrictions in Alaska are far out of proportion to the threat posed by COVID-19. Ten Alaskans have died from the virus, many fewer than the state’s annual death toll from influenza. He agreed that public health guidelines have contributed to that low COVID-19 death toll but said the danger has passed.

In the United States, more than 81,000 people had died of COVID-19 as of Friday, according to the COIVID Tracking Project.

Carpenter said fear over the virus is now a bigger threat than the virus itself and could cause Alaskans to sacrifice liberties. He said he feels Alaska is headed down a slippery slope and that while the state is far from Nazi Germany’s extermination camps, those didn’t start out overnight.

“Can you or I — can we even say it is totally out of the realm of possibility that COVID-19 patients will be rounded up and taken somewhere?” he said. “People want to say Hitler was a white supremacist. No. He was fearful of the Jewish nation, and that drove him into some unfathomable atrocities.”

“That’s not what led to the Holocaust,” he said. “There was no Jewish nation at that time. It didn’t exist. And using that term is anti-Semitic and a misunderstanding of history. ... If he wants to have a conversation about constitutional rights, that’s a discussion we can have, but likening it to genocide is completely erroneous and wrong.”

House Minority Leader Lance Pruitt, R-Anchorage, said Carpenter’s emails were not appropriate and “for that, he should apologize.”

In a text message sent after the initial publication of this article, Carpenter wrote, “Hitler wasn’t fearful of a Jewish nation because there was not one. The point was that it was fear that drove him. The attention of his fear was undesirables, including Jews. And the larger point is that PEOPLE FOLLOWED HIM.”

Vance said she wants “to stay away from either condoning or condemning anything he said about (the Holocaust)" but said she agrees with his concerns about government overreach during the pandemic.

“Some fear the virus and some fear the overreach, and I think we need to be sensitive to both,” Vance said.