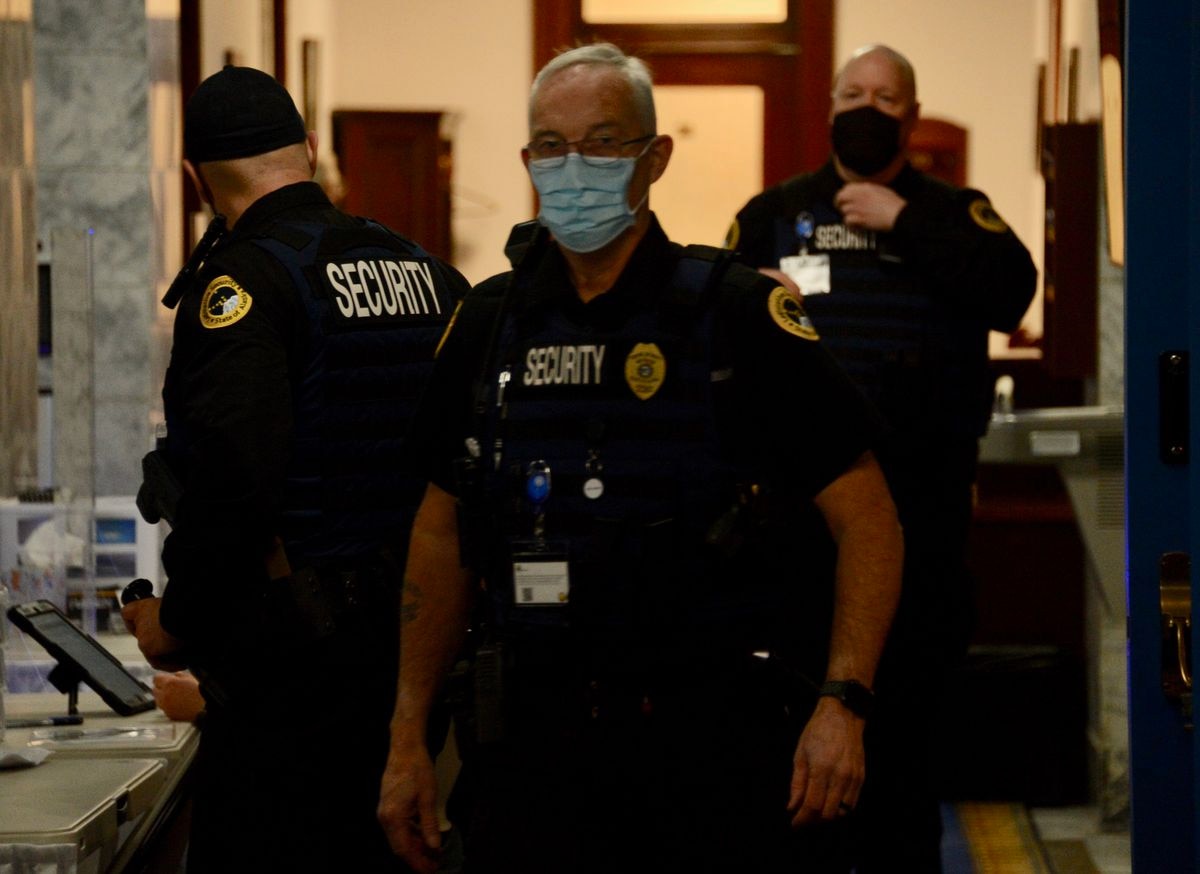 Rayme Vinson, chief of security at the Alaska State Capitol, is seen with two other officers Monday, Jan. 11, 2021 at the Capitol. The FBI on Monday warned of possible armed protests at state capitols. (James Brooks / ADN)

Rayme Vinson, chief of security at the Alaska State Capitol, is seen with two other officers Monday, Jan. 11, 2021 at the Capitol. The FBI on Monday warned of possible armed protests at state capitols. (James Brooks / ADN)

JUNEAU — Additional Alaska State Troopers and police will be stationed at the Alaska State Capitol after the FBI warned local officials about the possibility of armed protests at state capitols and in Washington, D.C., before President-elect Joe Biden’s inauguration.

The 32nd Alaska Legislature convenes Jan. 19, and the inauguration is the following day.

He requested that anyone with information about a specific threat contact the security office.

Some legislative employees shared copies of an unattributed flyer calling for armed rallies on Jan. 17. In Anchorage, the Dimond Center mall, listed as the site of a possible rally, announced it would shut down for the day.

Jessica Geary, executive director of the agency that administers the Capitol and the state’s legislative information offices, said she isn’t aware of any specific events at the state Capitol.

“We are closely monitoring and if an event is planned, I think word travels pretty fast. So we’ll find out about it. And we’ll just respond accordingly,” she said.

“We’ve definitely just seen what happened in our nation’s capital. We just feel like we can’t be too over-prepared. Yeah, it’s definitely a little bit scary,” Geary said.

Over the past year, some protesters have carried firearms openly into state capitols. In response to both the attack on the U.S. Capitol and the alleged kidnapping plot against Michigan’s governor, some states have banned firearms from their capitols. Alaska already forbids both open carrying and concealed carrying in the state Capitol.

[FBI warns of plans for nationwide armed protests next week]

“While our standard practice is to not comment on specific intelligence products, the FBI is supporting our state, local, and federal law enforcement partners with maintaining public safety in the communities we serve,” she said.

She said the FBI’s focus is “on those threatening their safety and the safety of other citizens with violence and destruction of property.”

Lt. Krag Campbell of the Juneau Police Department said the department will have a larger-than-normal presence when the Legislature convenes Jan. 19.

“We don’t have any ... talk about anything happening here, but we are planning accordingly,” he said.

Megan Peters, a spokeswoman for the Alaska Department of Public Safety, said the state agency is able to respond to either Anchorage or Juneau if needed.

“We will have some state trooper presence at the Capitol. So we’re just kind of working every avenue that we that we can to make sure that we’re as secure as possible,” Geary said.

“We’re closely working with other law enforcement agencies to monitor you know, any threats posted to social media or if any members are receiving them,” she said.