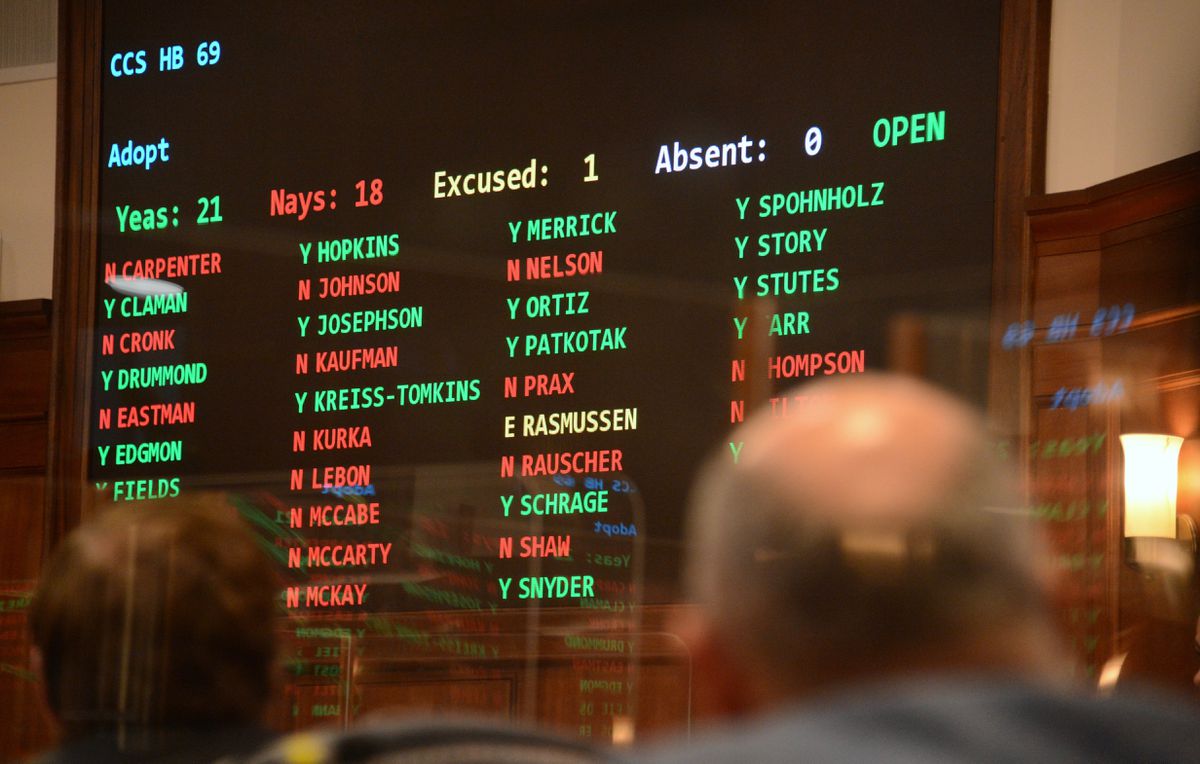 The voting board in the Alaska House of Representatives is seen through the anti-COVID plexiglass on House lawmakers' desks during the Tuesday, June 15, 2021 vote on Alaska's state budget in the Alaska State Capitol at Juneau. (James Brooks / ADN)

The voting board in the Alaska House of Representatives is seen through the anti-COVID plexiglass on House lawmakers' desks during the Tuesday, June 15, 2021 vote on Alaska's state budget in the Alaska State Capitol at Juneau. (James Brooks / ADN)

Unless lawmakers successfully revote, one of the failed votes will cut this year’s Permanent Fund dividend from about $1,100 to roughly $525. The state’s rural-power subsidy will end, high school students will lose state-funded scholarships, and a variety of construction projects will be put on hold for lack of funding.

Those parts of the budget are funded with money from specific savings accounts, and spending from those accounts requires 30 of the 40 members of the House to agree.

On Tuesday night, the vote failed 24-15. All 21 members of the coalition House majority voted in favor, as did minority Republican Reps. Bart LeBon and Steve Thompson of Fairbanks, and Mike Cronk of Tok. Rep. Sara Rasmussen, R-Anchorage, was excused absent for a previously scheduled medical appointment.

The budget itself passed 21-18, with all “no” votes coming from members of the Republican minority.

“This is the worst budget I have ever seen, bar none,” said Rep. Kevin McCabe, R-Big Lake.

The Alaska Senate may vote Wednesday on both the compromise budget and how to fund it, but even if the Senate passes both votes, the House’s failure means an incomplete budget.

The budget needs to pass both the House and Senate before advancing to Gov. Mike Dunleavy, who must sign it before July 1 to avert a government shutdown.

Alaska’s fiscal year begins on that date, and without a completed budget, most state services will stop functioning. If lawmakers don’t pass a budget before Thursday, tens of thousands of state employees will receive contractually mandated notices warning them that they will soon be laid off.

A second failed procedural vote may add further complications. The budget was written to take effect July 1, but the Alaska Constitution says that if a bill takes effect fewer than 90 days after enactment, two-thirds of the House and Senate must support that earlier date.

On Tuesday night, that “effective date clause” failed, 23-16. LeBon and Thompson joined the majority coalition in voting for it.

Staff for the House majority said they believe the budget has been written in such a way that the effective date clause will not be a problem, but that interpretation has not been legally tested.

Tuesday night’s failed votes were due to differences over the amount of this year’s Permanent Fund dividend and the lack of a reliable long-term formula for paying future dividends.

Most minority Republicans in the Alaska House want a dividend larger than the $1,100 amount that was set Sunday by a panel in charge of drawing up a compromise budget.

Members of the House majority were unwilling to increase the amount because doing so would violate a limit on annual spending from the Alaska Permanent Fund.

Money that remains in the fund is invested, and part of those investments are transferred each year to the state treasury. The transfer now makes up more than 60% of the state’s general-purpose revenue, much more than oil taxes.

“If we spend that down today, it won’t be there for the future,” said Rep. Ivy Spohnholz, D-Anchorage.

Members of the minority argued unsuccessfully that the fund’s extraordinary performance this year — it’s now at a record $81 billion — means that it makes sense to spend more.

Adding to the minority’s aggravation, part of the dividend is funded with money from a state savings account rather than the Permanent Fund. If the House fails to vote in favor of spending from savings, the dividend will shrink.

Other things are tied to the savings vote as well — construction projects in the Matanuska-Susitna Borough, repairs to an earthquake-damaged school, money for state troopers and the Department of Natural Resources.

That left minority Republicans feeling as if they were being coerced and set up for blame if they voted against spending from savings.

“I really feel that’s similar to a husband that chooses to beat his wife and then blame the wife for the beating. I really feel like that’s what’s happening here,” said Rep. Ben Carpenter, R-Nikiski, shortly before he voted no.

But members of the majority said tying the dividend and construction projects to the savings vote is leveling the playing field. The vote traditionally assures funding for Alaska’s Power-Cost Equalization program, which subsidizes the price of rural home electricity.

The minority had planned for weeks to use the savings vote as leverage, similar to what it did in 2019.

“We should all feel the effects if that three-quarter vote is not achieved,” said Rep. Neal Foster, D-Nome and one of the authors of the compromise budget.

“We’re all going to be in the same boat,” he said.

Leading legislators spent most of Tuesday unsuccessfully negotiating behind closed doors to find a compromise that would avert the evening’s failed votes.

House Minority Leader Cathy Tilton, R-Wasilla, and Speaker of the House Louise Stutes, R-Kodiak, each said that members of the minority want to see an agreement on a long-term fiscal plan before they provide their votes for the budget.

But any agreement on that could take months, until an August special session planned by Gov. Dunleavy.

In the meantime, said Rep. Tiffany Zulkosky, D-Bethel, tens of thousands of Alaskans in rural areas will see their home electricity prices skyrocket.

Across the state, high school students will lose access to scholarships promised by the state.

Rep. Bryce Edgmon, I-Dillingham, called the Legislature’s failure a “travesty,” but he said work will continue.

“I’m going to fight to get this vote in place. Later on, we’re going to be back in special session, maybe more than once. The battle isn’t over, and I’m sorry we didn’t succeed today,” he said.