Juneau’s 3 lawmakers live at home. So why are they collecting $160 per day each for expenses?

JUNEAU — Juneau's three state lawmakers are collecting thousands of dollars in public money meant to pay for their lodging and meals during the annual legislative session even as they live in their own homes.

The payments come on top of the Juneau lawmakers' annual salaries of $50,400 for a three-month job, though additional special sessions don't come with additional pay, just more per diem.

[Keep current on what's going on in Juneau. Sign up for our Alaska Legislature email newsletter, The Agenda]

Like the salary, the per diem payments are subject to federal income taxes for the Juneau legislators. And their $160 daily rate is also 25 percent less than the untaxed per diem payments for their out-of-town colleagues, based on a legislative policy.

Each of the three lawmakers gave a different explanation when asked to justify accepting the payments, which are made automatically by legislative support staff.

Kito described the money as a replacement for income he's not making while serving in the Legislature.

Egan, in his typically salty terms, defended his per diem by arguing that he still has legislative expenses during the session.

"Yeah, I've gotta buy a goddamn tie and sport coat and all that stuff, as I let my jeans rot at home," he said.

Parish, a freshman legislator, said the per diem policy predates him. He noted that the expenses are minuscule compared to Alaska's $3 billion deficit — though he also said he's trying to put the payments back into his district by spending them at events like community fundraisers and silent auctions.

"I think it's not the conversation that is most important right now," Parish said. "We need to be focusing on the billion-dollar questions, not on the $10,000 questions."

Juneau lawmakers have been collecting per diem for years. But with the state in the middle of a budget crisis, the payments strike a discordant note with some of the deficit-reduction hawks in the House majority coalition to which Kito and Parish belong.

Anchorage Republican Rep. Gabrielle LeDoux, a member of the coalition's leadership, has instituted several austerity measures for her chamber this year, from salary reductions for aides to price hikes at the legislative cafeteria. She's called on lawmakers to scrutinize their own spending as they cut budgets for state agencies.

Another coalition leader, Anchorage Democratic Rep. Chris Tuck, said at a January news conference that it was an "abuse" for lawmakers to collect per diem while "sleeping in their own beds." That was a reference to Anchorage-area GOP lawmakers who took the payments during a 2015 special session in Anchorage.

Tuck, in an interview, said Kito and Parish should be the ones to answer a reporter's questions about their per diem payments. But, Tuck added: "I would not be doing that in my hometown."

Questions about per diem have bedeviled lawmakers for decades, but especially since the onset of the budget crisis two years ago. Last year, Anchorage Republican Sen. Lesil McGuire, who's now retired, claimed $247 per diem payments while she was vacationing in Germany.

And Anchorage Republican Rep. Mike Hawker, who was being treated for prostate cancer, left Juneau for the final six weeks of last year's regular session, but still collected some $10,000 in per diem while he was absent. Hawker, who also retired, didn't respond to a request for comment.

The Legislature's current in-session per diem policy dates back to 2010. It was adopted the same year a state compensation commission, chaired by former state Sen. Rick Halford, eliminated another, $150 daily stipend known as "long-term per diem" that could be claimed by lawmakers whenever they did official business outside the legislative session.

That pay cut was balanced by a big raise, with the commission doubling lawmakers' salaries to their current level from $24,000. But along with the raise came specific caveats in the commission's report — that there would be no extra compensation for legislative service, and that payments for living expenses during the legislative session "shall not be considered a form of compensation."

"It was our intent to take some of the pressure off of per diem as a source of sustenance for people that didn't have alternatives," Halford said in a phone interview. 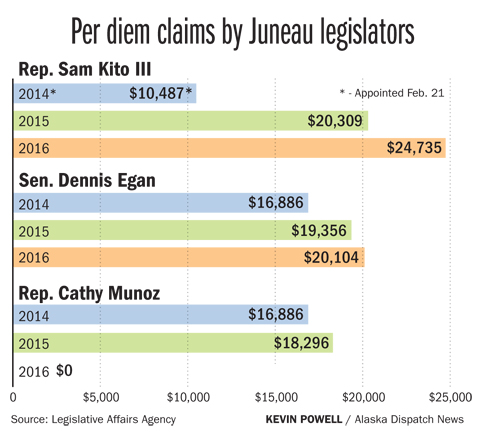 In spite of the limits set by the commission, the 2010 policy adopted by the Legislature still allowed the Juneau delegation to collect 75 percent of their colleagues' per diem payments. The policy itself contains no justification of the expense payments to the Juneau legislators, and lawmakers didn't discuss them at the 2010 committee hearing when they approved the policy, according to minutes of the meeting.

Non-Juneau lawmakers have also faced questions about their current per diem rate. At $213, it's nearly triple the $78 that would be paid to most executive branch employees on a similar long-term assignment, and critics argue it's far more than needed to cover daily expenses.

"It's pure and simple padding," said Bob Weinstein, a former Ketchikan mayor who's waged a personal campaign to reduce the payments. "I challenge any of them to show that they're spending $6,000 to $7,000 a month on room and board."

That argument is even harder to make for the Juneau delegation.

"Each of us has other jobs, but because we're fully engaged, or in session, we don't have the ability to actually participate in those other ways to generate revenue," Kito said. "And so, per diem was a recognition of the fact that my life is fully consumed with the legislative process during the 90 days we are here in Juneau."

Halford, the former compensation commission chairman, said he was reluctant to criticize the Juneau lawmakers for taking per diem, given that the past two sessions have extended far beyond the standard 90 days. And he suggested that the current $50,400 salary may not be enough, by itself, to support a younger legislator with a family — and who likely lacks the time to work another job.

"Whether they can justify their actions to their constituency is what matters," Halford said.

Weinstein was more critical, saying lawmakers should be doing more to keep their own expenses in check as they cut spending on road maintenance, state troopers and the university system.

"When the state had billions of excess and the legislators did this, people might not have paid attention," he said. "Now, I think we all care where every dollar's being spent."

Nathaniel Herz is a reporter for the Anchorage Daily News. He’s been a reporter in Alaska for nearly a decade, with stints at ADN and Alaska Public Media. He’s reported around the state and loves cross-country skiing.

ASD will suspend school bus routes for weeks at a time, affecting most students

In Alaska’s U.S. Senate race, Murkowski and Tshibaka look ahead to November

Instagram-ready ‘immersive’ Van Gogh shows have swept the US. Now, one has arrived in Anchorage.