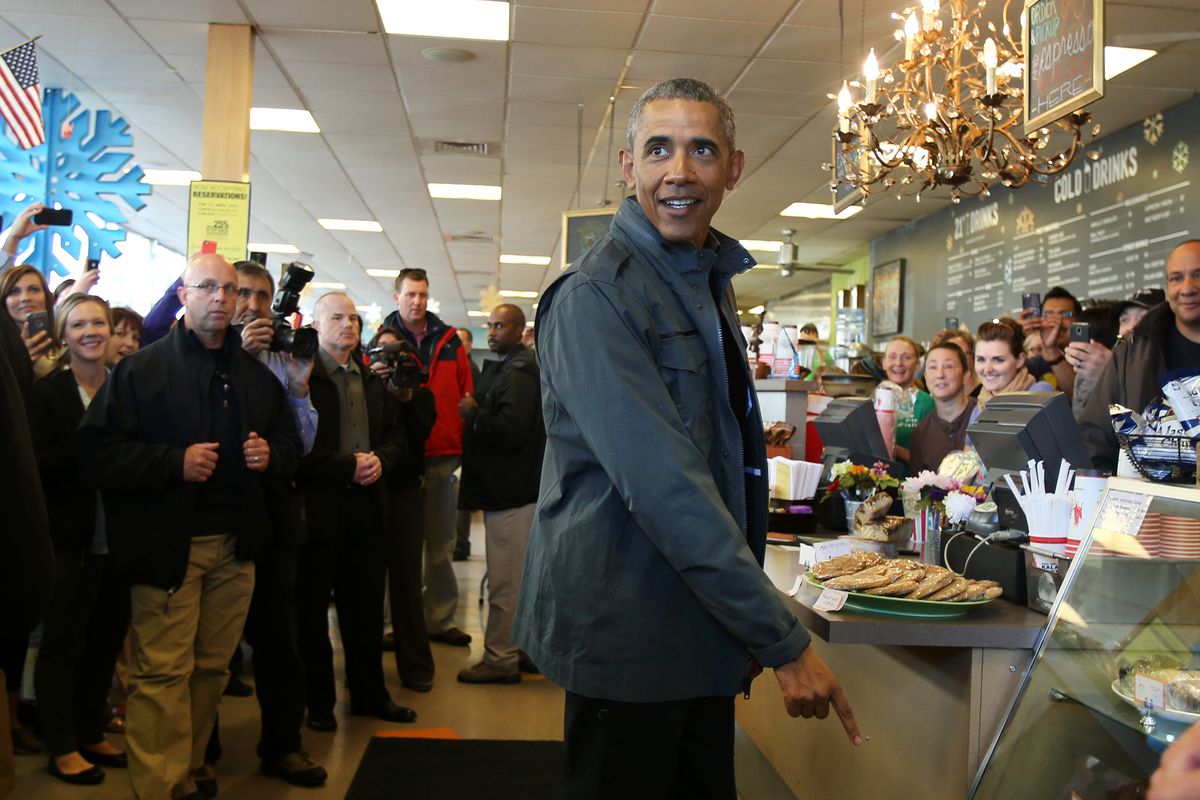 President Barack Obama stopped at Snow City Cafe in Anchorage before his trip to Seward on Tuesday Aug. 1, 2015, and he ordered all of the cinnamon rolls at the cafe. (Shelby Lum / ADN)

President Barack Obama stopped at Snow City Cafe in Anchorage before his trip to Seward on Tuesday Aug. 1, 2015, and he ordered all of the cinnamon rolls at the cafe. (Shelby Lum / ADN)

No, he did not order the Obamalet.

But President Barack Obama did pop into Snow City Cafe in downtown Anchorage Tuesday morning for $18.25 worth of cinnamon rolls and muffins -- to go.

Rumors that the president would be breakfasting at Snow City Cafe had been bubbling for days.

The restaurant is a block away from the Hotel Captain Cook, where Obama is staying. Known for its salmon and crab eggs Benedict and ability to inspire otherwise reasonable people to endure an hour-long wait for a table, Snow City is owned and loved by locals. (Mayor Ethan Berkowitz is among a group of part-owners.)

The restaurant had also courted an Obama visit by naming a special the "Obamalet" -- featuring Spam, "barakoli" and Swiss cheese -- and created a giant collage of photographs documenting the leader eating elsewhere. Behind the counter, staff even wore homemade buttons celebrating the presidential visit.

"The staff was like, 'Oh well, we've waited on Ted Danson,' " Fairbairn said, referring to the actor who was seen around Anchorage a few years ago while filming a movie here.

Then, when the breakfast rush was pushing past its peak around 9:30 a.m. and it looked like Obama would soon be on his way to a planned hike and boat tour in Seward, a group of Secret Service agents in sunglasses and khakis showed up and began politely using metal detection wands to check diners mid-omelette.

Word quickly spread on Twitter and Facebook, and by 10:15 a.m., the crowd inside rivaled the busiest Sunday morning. Dozens more lined the street corners outside, having been told the restaurant was at capacity.

Obama arrived by motorcade at about 10:20 a.m. and strolled in to cheers, wearing a gray Under Armour jacket and what looked like a presidential version of hiking garb.

"I'm about to go hike on a glacier; I need some nourishment," he told the crowd.

The president discussed the baked contents of the display case and asked his press secretary, Josh Earnest, if he wanted coffee to go. The president asked for all the cinnamon rolls. He bantered with the restaurant's staff as a crush of White House press pool photographers and reporters angled for a shot, at one point saying, "I can tell this is where the cool folks hang out."

From there, Obama worked his way through the restaurant, stopping at tables to greet patrons.

John Wilson, visiting from Youngstown, Ohio, said he told the president about Donald Trump's tweet that he'd change the name of Denali back to Mount McKinley if elected.

"He said, 'We have nothing to worry about,' " Wilson recounted later.

The president stopped to take photos with staff members, but asked that it not be a selfie.

Then he was out the door and the restaurant slowly returned to the usual level of breakfast rush chaos.

In all, Obama bought three breakfast pastry assortment platters, which include muffins and buns. The total was $18.25. He paid with a $50 bill and left the change, a tip of $31.75.

In the excitement, it was later discovered that Obama wasn't charged for the cinnamon rolls.

"He might have gotten those for free," Fairbairn shrugged.

Byron Bluehorse sat at the counter staring at his coffee.

A professor of tribal management at the University of Alaska Fairbanks, he makes a habit of coming in for crab cake Benedict when in town. That's all he was counting on Tuesday morning.

"Everybody, I think, is a little starstruck," he said.