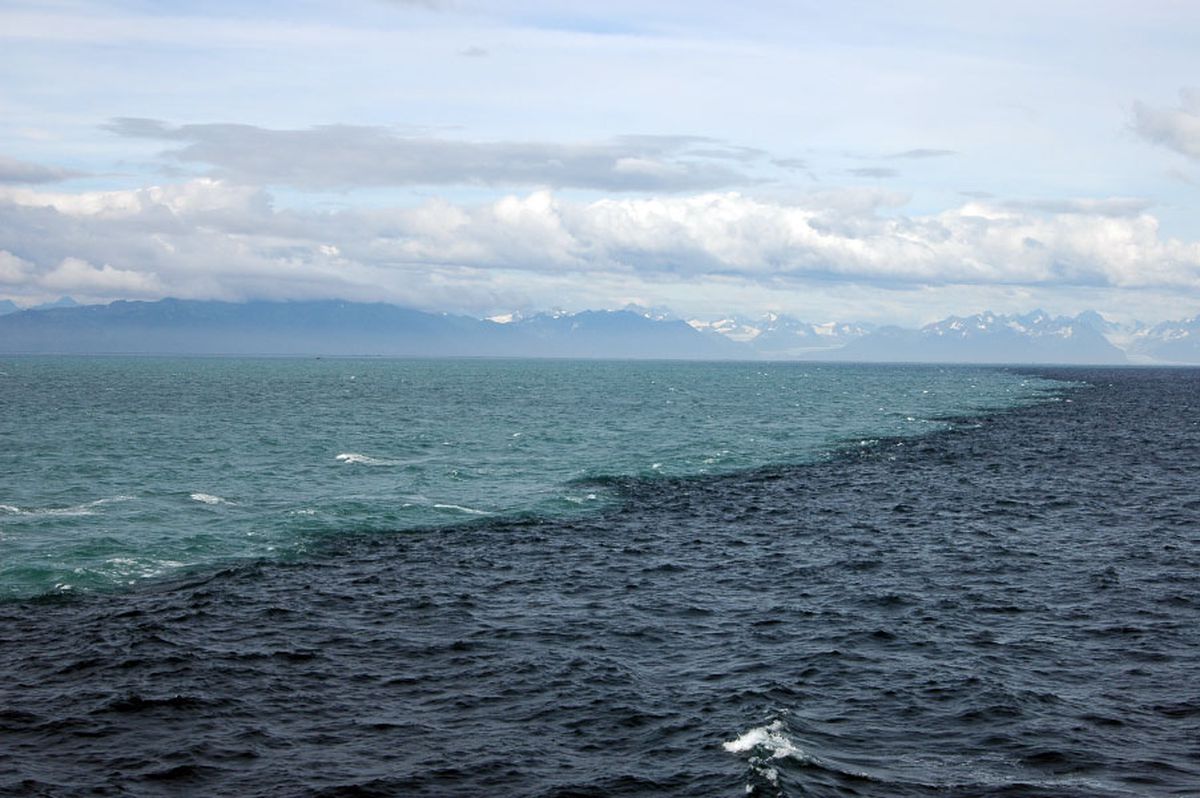 A picture from the Gulf of Alaska that has been making the rounds on the Internet for the last few years -- though particularly in recent weeks -- shows a strange natural phenomenon that occurs when heavy, sediment-laden water from glacial valleys and rivers pours into the open ocean. There in the gulf, the two types of water run into each other, a light, almost electric blue merging with a darker slate-blue.

Informally dubbed "the place where two oceans meet," the explanation for the photo is a simple one, though there are many misconceptions about it, including that catchy title. In particular on popular link-sharing website Reddit, where users have on multiple occasions erroneously attributed the photo's location as "Where the Baltic and North Sea meet" and the two types of water as being completely incapable of ever mixing, instead perpetually butting against each other like a boundary on a map.

You also may have seen a variation on the photo featuring the same phenomenon, taken by photographer Kent Smith while on a July 2010 cruise in the Gulf of Alaska. That photo too has been circulating the web for some time, though the misconceptions about it seem to be less thanks to Smith's explanation of the photo on his Flickr page. That one has also been making the rounds on Reddit and social media for years, and had racked up more than 860,000 views by early 2013 on that one page alone, Smith said.

That original photo, however, originates from a 2007 research cruise of oceanographers studying the role that iron plays in the Gulf of Alaska, and how that iron reaches certain areas in the northern Pacific.

Ken Bruland, professor of ocean sciences at University of California-Santa Cruz, was on that cruise. In fact, he was the one who snapped the pic. He said the purpose of the cruise was to examine how huge eddies -- slow moving currents -- ranging into the hundreds of kilometers in diameter, swirl out from the Alaska coast into the Gulf of Alaska.

Those eddies often carry with them huge quantities of glacial sediment thanks to rivers like Alaska's 286-mile-long Copper River, prized for its salmon and originating from the Copper Glacier far inland. It empties out east of Prince William Sound, carrying with it all that heavy clay and sediment. And with that sediment comes iron.

"Glacier rivers in the summertime are like buzzsaws eroding away the mountains there," Bruland said. "In the process, they lift up all this material -- they call it glacial flour -- that can be carried out."

Once these glacial rivers pour out into the larger body of water, they're picked up by ocean currents, moving east to west, and begin to circulate there. This is one of the primary methods that iron -- found in the clay and sediment of the glacial runoff -- is transported to iron-deprived regions in the middle of the Gulf of Alaska.

As for that specific photo, Bruland said that it shows the plume of water pouring out from one of these sediment-rich rivers and meeting with the general ocean water. It's also a falsehood that these two types of water don't mix at all, he said.

"They do eventually mix, but you do come across these really strong gradients at these specific moments in time," he said. Such borders are never static, he added, as they move around and disappear altogether, depending on the level of sediment and the whims of the water.

There is much study being conducted on how this iron influences marine productivity, in particular its effects on the growth of plankton, which Bruland referred to as "the base of the food chain."

But rivers aren't the only way that glacier sediment finds its way into the Gulf of Alaska -- occasionally strong winds can whip up enough silt to create a cloud of dust that's visible even from space as its being carried out to sea.

So next time somebody shares a "really cool photo" of "the place where two oceans meet," feel free to let them know the science behind the phenomenon. After all, in this Internet age, nothing spreads faster than misinformation.