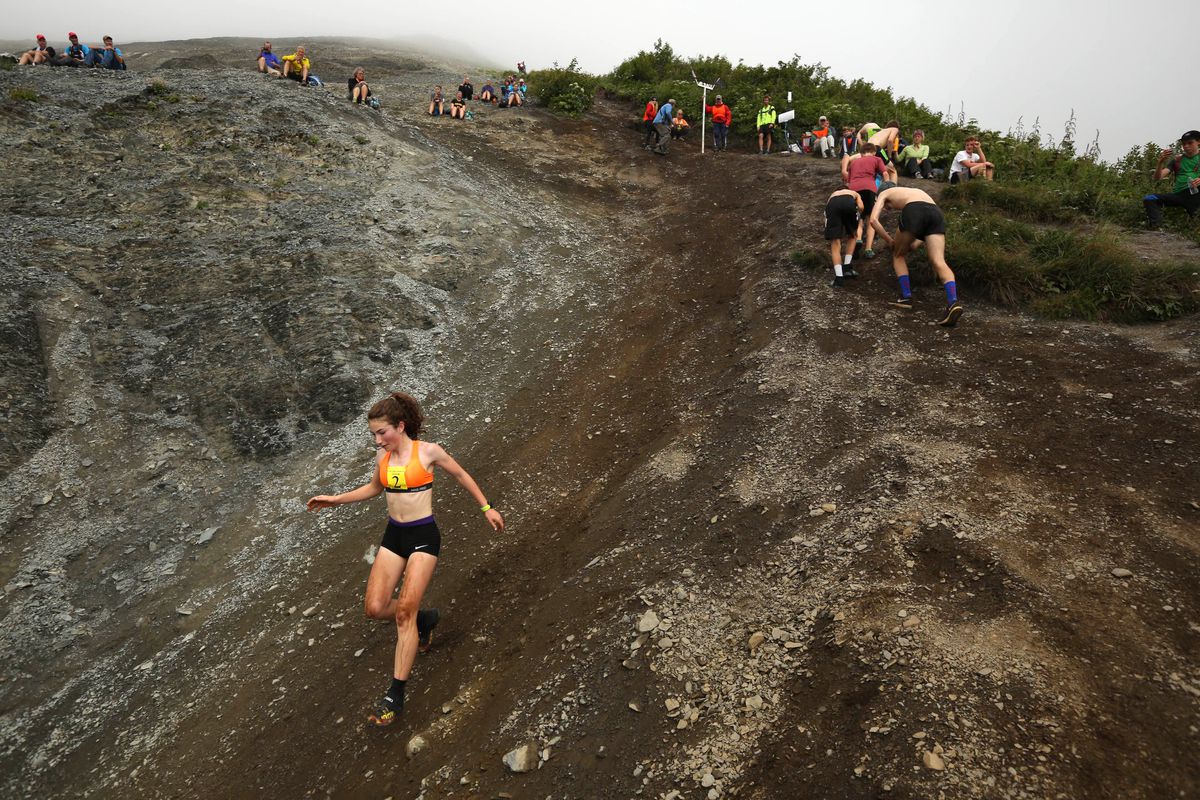 SEWARD — Three times this summer, Molly Gellert made the trip from Anchorage to Seward to climb Mount Marathon, the 3,022-foot mountain that is the center of attention here every Fourth of July.

One time, she was joined by Luke Jager, her teammate on West High's ski and cross country teams and the reigning junior champion in the storied Mount Marathon Race.

"Luke is so good on this mountain," Gellert said. "I actually ran down it with him one time this year and I thought, wow, I'm running with the Mount Marathon champion."

As it turns out, Jager was too.

Jager and Gellert, both 16, scrambled to victories Monday morning in Mount Marathon's junior race, which goes about halfway up the mountain and back.

Jager led all runners in the mixed-gender race to defend his title. He finished in 27 minutes, 29 seconds, beating his winning time from last year by 10 seconds.

A pair of Anchorage boys finished second and third — Hamish Wolfe of South High was second in 28:01 and Trent Fritzel of Grace Christian was third in 28:49.

Gellert broke the 32-minute mark with a time of 31:55 to place 10th overall.  She attacked the downhill to put more than a minute between herself and last year's winner, Riana Boonstra of Kenai, who placed second in 33:11. Seward's Ruby Lindquist was third in 34:02.

As was the case last year, when Gellert finished third, Gellert and Boonstra were close at the race's turnaround point on the mountain.

As she began her descent, Gellert's mantra was "Just don't fall this year."

"I did a nosedive in the creek (last year)," she said. "It's all part of the excitement."

Gellert, one of Alaska's top junior skiers, stayed on her feet all the way down to pull away from Boonstra.

"I've been working on my downhill a little more," she said. "Just trying to stay on your feet. If you can do that, you're gold.

"You can't be super-scared. It's so easy to get scared, especially in the creek where there are loose rocks everywhere."

"I'm more emotionally attached to this than any other race in the summer," said Jager, another elite junior skier. "The people, the atmopshere. You can see everyone of your friends in one spot."

Jager, who honored Independence Day by wearing red, white and blue socks, said conditions were nearly perfect — overcast, no rain and not too warm for the 9 a.m. start.

He said he planned to hold back a bit on the climb but wound up making good time. He said he built a gap of about 30 seconds over Wolfe, big enough that he was out of Wolfe's view.

Racers in the junior race range from high schoolers to grade schoolers. Ten-year-old Blaise Rinner of Anchorage, running his fourth Mount Marathon, finished with blood streaking his face and one of his legs and the dirt on nearly every exposed body part.

"I fell down and scraped my knee," he said, pointing to the scrape. "I fell again on the switchbacks."

But apparently the reward is worth the risk.

— More than 20 years after a downer debut, Jerry Ross hopes to give Mount Marathon another try