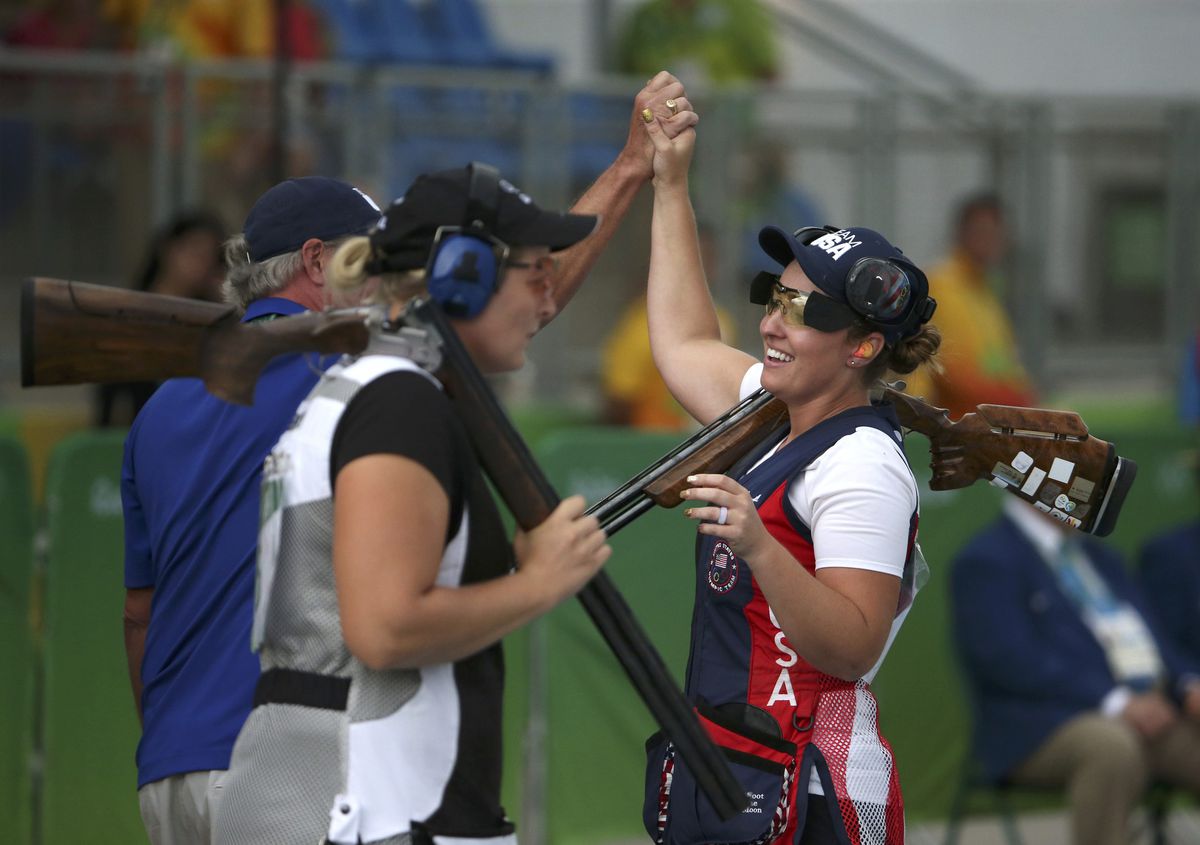 Undaunted when she faced her second sudden-death shootoff of the day, trapshooter Corey Cogdell-Unrein of Eagle River captured the Olympic bronze medal in dramatic fashion Sunday in Rio de Janeiro.

Cogdell-Unrein won the battle for bronze at the Olympic Shooting Centre on the first target in sudden death.

The victory gives Cogdell-Unrein a matching set Olympic medals. She won her first bronze at the 2008 Beijing Olympics.

"To think about where I came from and how far I've come, it's just hard to believe," Cogdell-Unrein said in a phone interview Sunday evening.

"I don't know if it's really set in yet. I came into this match with some expectations based on my performance over the last year and a half. So I was really hopeful. But I still honestly feel like that small-town girl from Alaska and I just don't see myself as one of the best in the world."

[Photos from Day 2 of the Rio Summer Olympic Games]

The first person Cogdell-Unrein called Sunday was her dad in Eagle River. Dick Cogdell had predicted his daughter would deliver good news.

"I knew he was just sitting there on pins and needles waiting for me to call," Cogdell-Unrein said. "He's super excited. I'm just so happy that I was able to do this for him because he's been such a huge supporter over the last four years after I didn't win a medal in London. I didn't really have a strong belief in myself and he was always the one believing in me.

"Last night before I went to bed I talked to him and he reiterated that — he said, 'I know you're going to go out and win a medal. It's your destiny.' ''

The second person Cogdell-Unrein called was her husband, Mitch Unrein, a defensive lineman with the Chicago Bears.

The Bears are in training camp so Unrein was unable to go to Brazil to watch his wife. The entire team donned "Team Unrein" jerseys at Saturday's practice, and on Sunday Unrein organized a viewing party at the team's training facility in Bourbonnais, Illinois.

Cogdell-Unrein fired a 68 out of a possible 75 during Sunday morning's preliminaries to advance to the six-woman semifinals.

She finished the 15-target semifinals with a score of 13, giving her a tie for second place with Australia's Catherine Skinner.

That forced a sudden-death shootoff to see which woman would join New Zealand's Natalie Rooney in the gold-medal match.

Cogdell-Unrein said she hurried her shot in the first shootoff and was determined to take her time when she landed in the bronze-medal shootoff, in which she again took the first shot.

"Being in the first position is quite a disadvantage, especially if you get a referee who likes to move fast," Cogdell-Unrein said. "You only have 12 seconds after he readies you, and at five seconds there's a big clock that starts flashing red and white and you can see that out of the corner of your eye.

"He readied me and I wasn't ready. So I rushed the shot and missed that target.

"In the bronze match I told myself, 'I'm not going to rush it if he readies me quickly. This is too important to rush. I'm gonna take my time.' ''

And she did, even when the flashing red-and-white lights came on.

Almost as soon as Cogdell-Unrein said "pull," a puff of pink smoke appeared when her shell hit the target.

When Galvez missed less than a minute later, Cogdell-Unrein reacted with a mix of tears and laughter.

"Nerves of steel!" U.S. shooting star Matt Emmons, a three-time medalist and University of Alaska Fairbanks grad who competes next week, tweeted in a congratulatory note.

Nerves of steel! @CoreyCogdell wins the bronze in trap in a shoot-off!!! #TeamUSA #rockstar

In the gold-medal match, Skinner beat Rooney 12-11. Defending Olympic champion and world-record holder Jessica Rossi of Italy made it to the six-woman semifinals but failed to make the cut for the medal matches.

Cogdell-Unrein and Galvez were tied 13-13 after 15 targets in their match. Both missed an early target and they remained tied going into the final three shots.

Cogdell-Unrein missed her 13th target, and Galvez hit hers to seize the lead.

On the 14th target, Cogdell-Unrein scored a hit and Galvez missed, making the match even again and setting up a high-stakes final shot.

"When she missed that target, it gave me an extra boost — 'I am hitting (this last target),' "Cogdell-Unrein said.

Cogdell-Unrein becomes Alaska's third two-time Olympic medalist. Palmer skier Tommy Moe won gold in the men's downhill and silver in the super-G at the 1994 Winter Olympics and Juneau basketball player Carlos Boozer won bronze in 2004 and gold in 2008 as a member of the U.S. men's team.