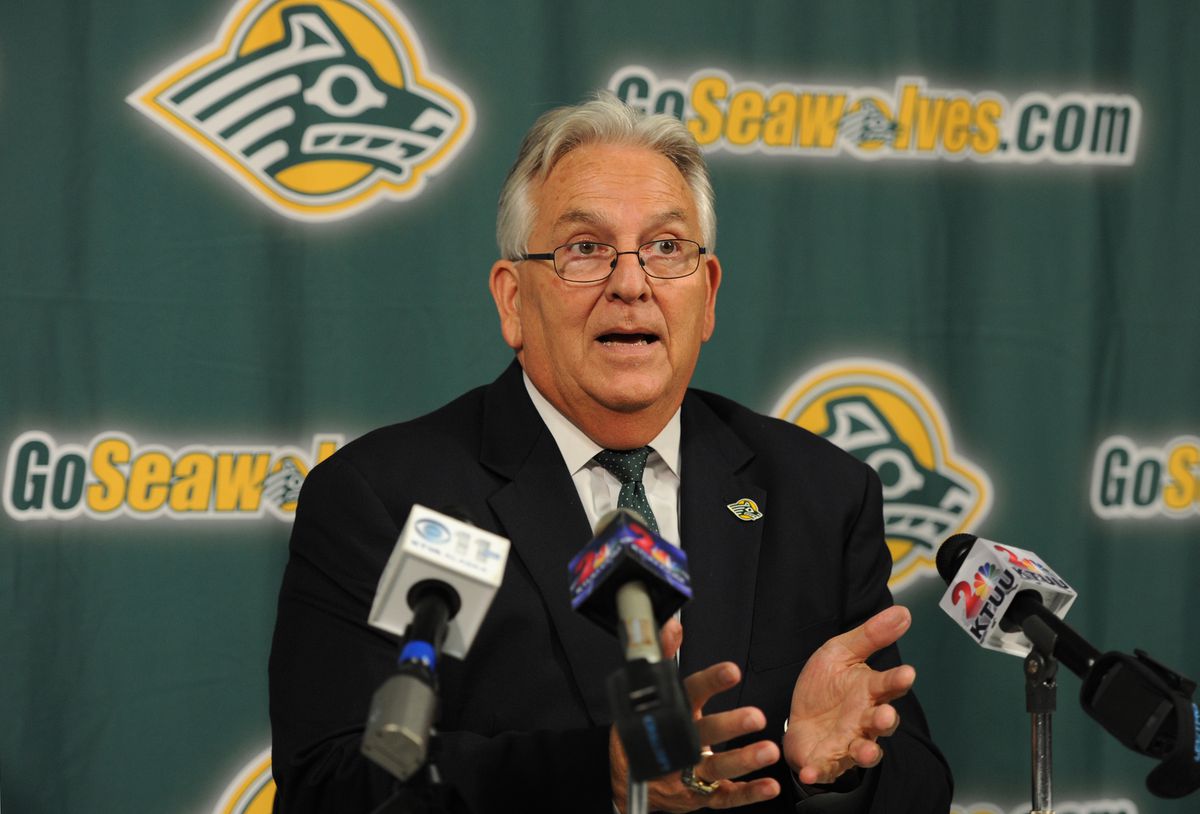 UAA athletic director Keith Hackett said no decisions have been made about the budget cuts facing the athletic department, although two of the three options presented in a budget review would eliminate hockey. (Bill Roth / Alaska Dispatch News)

UAA athletic director Keith Hackett said no decisions have been made about the budget cuts facing the athletic department, although two of the three options presented in a budget review would eliminate hockey. (Bill Roth / Alaska Dispatch News)

College hockey in Alaska could take a fatal hit based on options presented in a financial strategy report released this week by the University of Alaska.

With the university system facing $50 million in budget cuts because of the state's sinking economy, reductions are a certainty for the athletic departments at UAA and UAF.

Two of the three options would result in the elimination of intercollegiate hockey at both schools. A third would preserve hockey at either UAA or UAF, but not both.

The report on athletics was one of seven from the Strategic Pathways review team, which included representatives from both colleges and college communities.

The reports will be presented to the Board of Regents in September, with final decisions not expected until later this year, UAA athletic director Keith Hackett said at a press conference Thursday.

"These are very, very trying times," Hackett said. "We have significant challenges in the state of Alaska."

He declined to declare college hockey dead in Alaska. "Everything is on the table," Hackett said.

Yet two of the three options presented in the Strategic Pathway report eliminate hockey.

One option is the total elimination of intercollegiate sports at both schools.

A second option would limit both schools to teams competing in the Great Northwest Athletic Conference, an NCAA Division II conference that UAA and UAF already belong to for basketball, volleyball, cross country and track.

A third option would preserve hockey at either UAA or UAF, but not both. It would create a consortium combining the two athletic programs, with some sports based in Anchorage and others in Fairbanks. There is no precedence in the nation for a cooperative between NCAA schools separated by a distance similar to that between UAA and UAF, which are more than 300 miles apart.

"Those options certainly aren't favorable," UAA hockey coach Matt Thomas said. "None of them look good for athletics in the state at all."

Thomas, who is heading into his fourth season at UAA, said he remains optimistic the sport will survive.

"I'd like to think cooler heads will prevail," he said. "To get rid of a program that has been part of the city of Anchorage, and a big part of the hockey community, would be devastating. Scotty Gomez, Joey Crabb, Barrett Heisten — a lot of Anchorage kids grew up on Seawolf hockey and made it to the NHL, and almost every part of youth hockey here is touched by Seawolf hockey. Coaches all over town are former players."

The all-GNAC option would eliminate more than hockey – and it would likely prompt the creation of men's soccer teams.

At UAA, skiing and gymnastics would also get the ax under the all-GNAC plan. At UAF, skiing and riflery would be cut.

None of those sports are offered at the NCAA Division II level.

Without hockey, the only men's team sport left at both UAA and UAF would be basketball.

Hackett said the consortium option is the most unlikely of the three, because it would require a special exception by the NCAA. The NCAA allows very few cooperative efforts, he said, and none of them involve schools separated by significant geographic distances.

"They're all neighbors," Hackett said. "Similar to if APU and we were to (form a consortium)."

The online Strategic Pathways report includes a place for public comment, and Hackett said public input is important. "Talk about the value and importance of what intercollegiate athletics means," he said.

Thomas said the hockey community needs to show its support at the box office. The average announced attendance at UAA games has been in decline for two decades and has fallen in nine of the last 10 seasons.

Last season's average of 1,763 marked a 15.7 percent drop from the previous season and the first time average attendance fell below 2,000 since the Seawolves began playing full-time at Sullivan Arena in the 1983-84 season.

"I know everyone wants us to win — it takes time, and I think we're getting there," Thomas said. "It would be a shame for hockey to go away, because if it goes, it's never coming back.

"I've got a lot of confidence in knowing there is a supportive hockey community here, and we need those people to show their support."