Rink retirement: Standard-bearer Scott Gomez calls it a career after 16 seasons in the NHL 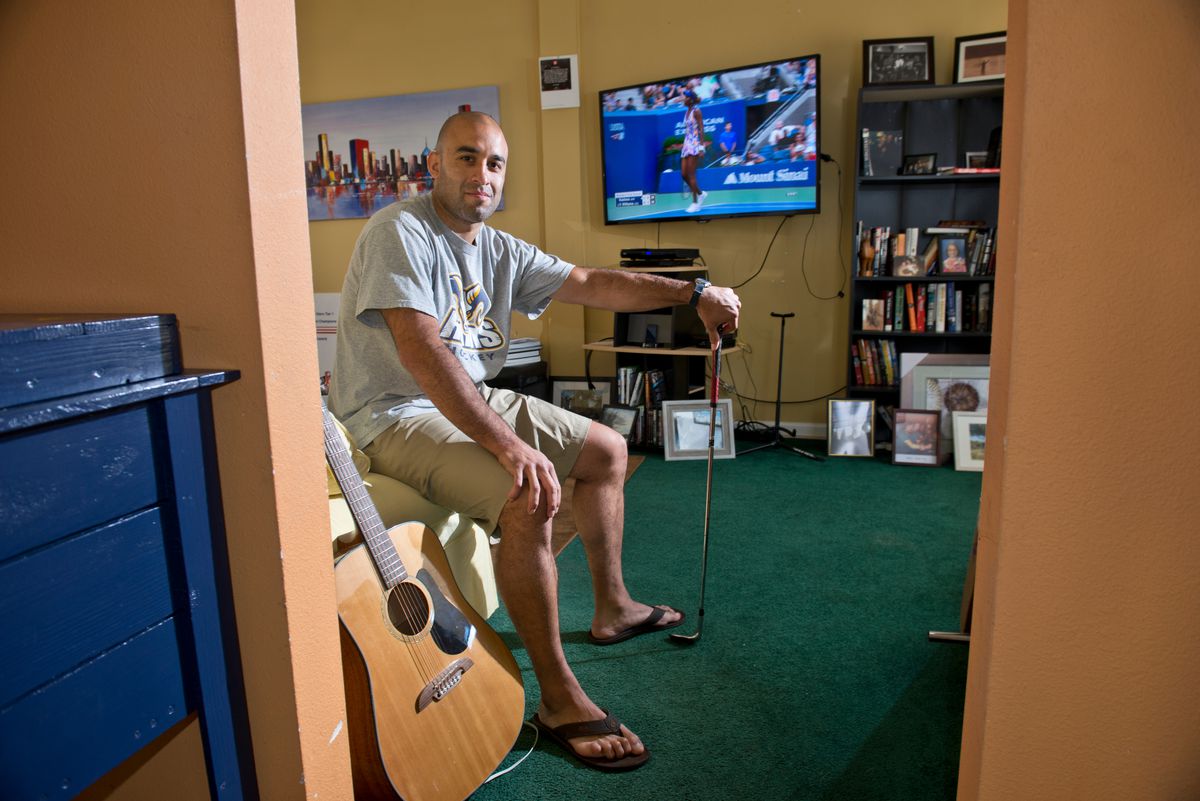 Scott Gomez lives part of the year in the Airport Heights home where he was raised.  (Marc Lester / Alaska Dispatch News)

Scott Gomez lives part of the year in the Airport Heights home where he was raised.  (Marc Lester / Alaska Dispatch News)

Everything about this feels right — this time, this place, these people.

Scott Gomez sits on the patio behind his home, the same modest, three-bedroom, one-bath ranch house he grew up in, sipping coffee, enjoying the afternoon sun, reminiscing. He's always felt protected here in Airport Heights. So many childhood games played in this backyard at 1812 Toklat Street, or on the baseball field and on the rink, which now bears his name, just down the street at Tikishla Park. The neighbors haven't changed much — just the other day Andy Parent,  from across the street, was back in town visiting. Andy used to let Scott, a decade younger, hang out with him and his high school buddies. So he and Scott caught up over coffee one morning.

Through the side gate comes Scott's younger sister, Natalie, home from a day teaching English at West High. She lives next door. She's just checking in. Scott's childhood friend and teammate, Ben Brady, is hanging out. Soon, Scott's mother, Dalia, arrives, all smiles and hugs and hospitality — need something to drink or eat? Onto the patio trudges Bacon, the Gomez family bulldog, to cadge some pets from a stranger.

"What I accomplished started here,'' Gomez says. "I got where I am because of this neighborhood. This is Airport Heights. This is home.

"I'd never think of living anywhere else. To leave, I'd almost feel I'd be betraying Eastside. This is home base.''

He's come full circle. This is where the most illustrious hockey career in Alaska started, and this is where it ends.

Scott Gomez is done, retired at 36.

After 16 NHL seasons, and 17 as a pro, it's time. He doesn't want to cast about for the next one-year contract or chase a nightly seven minutes of ice time.

It was a helluva run — first-round draft pick, two Stanley Cups with the New Jersey Devils, Calder Trophy as Rookie of the Year, more games and points and you-name-it than any other Alaskan who has played in the world's greatest league, a ballpark $60 million earned, his family taken care of, the Olympics, the World Cup, twice playing center for his hometown Alaska Aces, induction into the Alaska Sports Hall of Fame.

Caption
Florida Panthers center Scott Gomez (23) warms up before the game against the Washington Capitals at the Verizon Center in Washington, D.C., Saturday, November 2, 2013. (Chuck Myers/MCT)
Wait 1 second to continue.

"It's been a wonderful ride for the family — crazy, wild, wonderful,'' says Carlos Gomez, Scott's father. "We live in a whole different world now, all thanks to him.

"Man, it was a blast. I look back and think, 'Wow, I can't believe all that happened.' We are so blessed."

Well, Scott says, the occasional thought flits in the back of his brain — he'll never make a power-play pass again, never set up a teammate for success. He's been wrapping his head around that all summer.

"This has been my life,'' he says. "It's so weird to think I'm never going to play hockey again.

"People say, 'You'll find something.' But saying that, there will never be that feeling again, of even playing a preseason NHL game. You're playing at the highest level there is.

And so he has been making phone calls and sending texts, giving friends and old teammates and coaches and trainers, from the NHL down to youth level, a heads-up that this is a wrap.

"It's not world-breaking news,'' he says, "but it's nice to say thank you to the people who were there for you, and along for the ride.''

He's spent more time back in Anchorage this summer than he has since he turned pro. There's been time to hang out with his friends, who are mostly the same guys he hung out with as a teenager. He's enjoyed time with family — Carlos and Dalia, who live up on the Hillside in the house their son bought them, plus Natalie, and older sister Monica and her three daughters. There's been time for his beloved fishing on the Kenai, where the family has a place.

And for once, August doesn't mean hooking up in the Lower 48 with one of his trainers, Vladimir Bure, for punishing workouts prior to training camp.

Still, he's taken up running, and at 190 pounds, is 5-10 pounds lighter than his playing weight. Old teammates long retired advised him to stay active, and he's glad he can — hockey prompted one surgery for a broken hand and a recent one to tidy up an elbow, but otherwise he's good to go.

Yet he can't imagine himself just hanging out and mixing in a few runs a week, or traveling endlessly. Looks like he's got a broadcasting gig lined up. He already dipped a toe in broadcasting last spring for NHL Network. He imagines he'll split time between Anchorage and New York, where he still has an apartment.

Mostly, Gomez looks back and hopes he represented his state well. Being an Alaskan is something he cherishes. He still thinks of himself as the kid from Airport Heights, still gets a laugh that teammates, and East Coast media, were so startled when as a NHL rookie he didn't think anything of having his address printed in his hometown newspaper.

"You have an obligation, a responsibility to your state,'' he says. "The goal, the day I left here, was I always wanted to make Alaska proud. That's my state. That's my people.''

In Gomez's younger NHL years, he once played against center Nate Thompson of Anchorage. Gomez was an established star, Thompson a rookie who grew up asking his dad to take him to watch Gomez play for East High. As they prepared to battle over a face-off in Thompson's zone, Gomez looked at how Thompson prepared to take the face-off and told him to turn his hand over, take the face-off on his backhand.

"I looked at him like he had eight heads,'' Thompson said.

Gomez again told Thompson to change tactics, so Thompson did. After the game, Gomez explained to Thompson that the rookie's initial tactic might work against Gomez, but it likely wouldn't against Gomez's teammates who were exceptional at face-offs.

"Yeah, he was on the other team,'' Gomez says now. "He's still from my hometown. We always look out for one another.''

He still does that, whether it's jumping on the ice at a youth clinic, quietly taking care of a bar or restaurant tab, dropping in on a meeting of UAA hockey supporters or saving girls high school hockey in Anchorage through the Scotty Gomez Foundation, which his father runs.

And he learned to embrace his status as the NHL's first Hispanic player — Carlos is a Mexican-American born in the U.S. and Dalia was born in Colombia before moving to the U.S. as a child. Growing up in Airport Heights and attending elementary, middle and high schools with diverse student populations, he thought of himself as Scotty Gomez the hockey player. National media pushed the "first Hispanic in the NHL'' angle when Gomez was a rookie. He rolled with it, figured if that inspired a minority kid to play hockey, cool.

Credit for all that goes to his parents and family, and "the way he was raised,'' said Louis Mass, Gomez's friend, trainer and former Aces teammate.

The people closest to him say he has not changed from the happy-go-lucky 19-year-old kid who bolstered his preternatural talent, a considerable work ethic and a brain for the game with a seeming immunity to pressure. Minutes before his NHL debut, Devils captain Scott Stevens was astonished to find Gomez kicked back on a couch, in full gear, reading a newspaper.

Mass once asked Gomez what that first game in 1999 was like, how he coped with his nerves.

Few men have smiled as much as Gomez did on NHL rinks. And why not? He remembers an old teammate, Turner Stevenson, telling him the NHL life was like living in a fantasyland. So that's how Gomez approached it, with reverence, sure, but with unbridled joy.

He grew up inspired by fellow East High athlete Trajan Langdon, who went on to play in the NBA and, Gomez says, "was the first guy to let guys like me know, yeah, you can go places.'' He worshipped centers like UAA's Dean Larson and Chugiak's Brian Swanson, and hopes he inspired young players, as Larson and Swanson inspired him.

"He definitely paved the way for the rest of us Alaskans,'' Thompson says. "He put us on the map. What he did, it's a career you dream about. He is the standard.''

Now he's the standard-bearer. He savored a remarkable run. One chapter finishes, another begins.

And everything about it feels right.