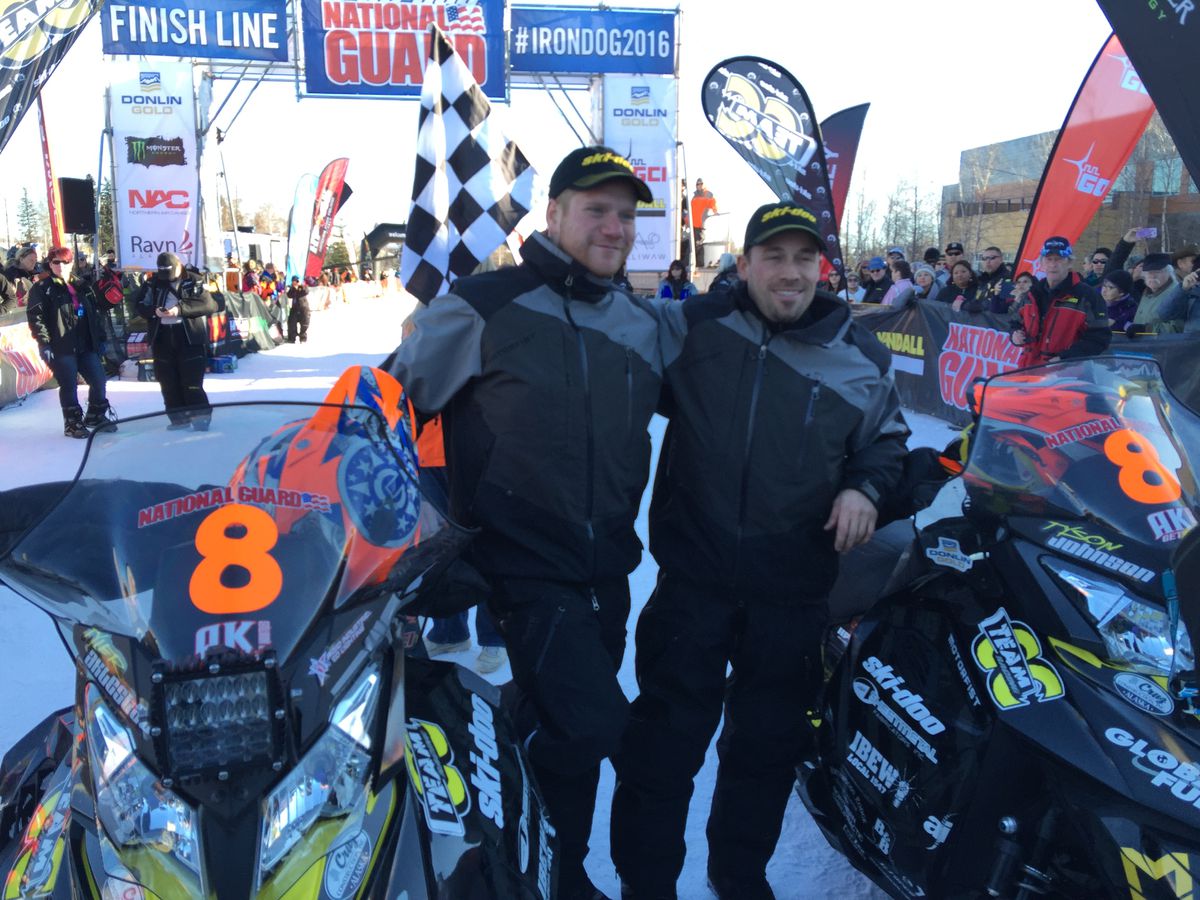 FAIRBANKS — As hundreds gathered along the Chena River Saturday for the most contentious race finish in Iron Dog history, race director Kevin Kastner said the organization had no choice but to disqualify the first-place team after a photo surfaced showing bystanders touching the two snowmachines during a refueling stop between Ruby and Tanana.

The race from Big Lake, with a stop in Nome, began a week ago.

Aklestad and Johnson led the race Friday into Tanana and were expected to repeat as champions, but were disqualified because two people pushed down on the back of their sleds during a refueling stop at a site called Bible Camp.

"It's very unfortunate, it's very contentious and we understand that and the implications to us as an organization are very clear," Kastner said.

Iron Dog officials stopped the GPS tracking of the team early Saturday, but Kastner said for safety reasons he asked that the tracking be reinstated, but it didn't happen.

Kastner said a rule added in 2016 specifically prohibits any "physical contact" between the racers and others during that section of the trail. The rule requires disqualification, he said.

"To be clear, they're not allowed any outside assistance anywhere, the difference is that the penalty that comes with any physical contact with the snowmachine, any outside help of any kind, other than simply providing the fuel and oil for their use, it's a mandatory disqualification," he said.

As word of the disqualification spread, supporters of the two men said that other similar infractions have led to much lesser penalties. But the rules allow the three race marshals to use their discretion in meting out penalties at checkpoints.

Kastner said he talked with the race marshals who made the decision and later , consulted with the board of directors before the volunteer marshals released a statement early Saturday. He said there have been no complaints about the integrity of the marshals.

"The racers who signed up agreed to these rules, then signed their names to these rules. Those rules were also read aloud, specifically that section in question, at the mandatory drivers' meeting," he said.

A letter signed by 17 racers overnight in Tanana said that the explanation given at the drivers' meeting was that actions of people with no connection to the race who are beyond the control of racers would not be cause for any penalty.

"The photo shows 'outside people' pushing down the back of the Snogo, for which no gain obtained as a result. This was the act of 'outside person' trying to help and in no way should result in the actions taken by the disqualification. Team 8 should be allowed to continue," the letter said.

Interviewed earlier Saturday before the finish, Kastner said the organization decided to :stand behind the decision of the race marshals because that's what we do, we've delegated that to this group of volunteers to be impartial and use good judgement," he said. "They're the cops. They enforce the rules. They don't make the rules."

Johnson said he believed that the head race marshal had a grudge against his team from an incident last year when he wanted to penalize the team and other marshals disagreed. "He's been bringing it up ever since," Johnson said.

Aklestad had entered the Iron Dog a dozen times and scratched eight times before winning last year. Johnson had eight scratches in 17 starts before becoming champion.

Kastner said whether the rule needs to be looked at again will be up to the board. He said he suspects that there will be a review over the intent or the application of the rule.

The rule came about in part because there were reports in the past of racers getting help in that unofficial refueling stop.

Johnson, who said he slept about one hour Friday after learning about the disqualification,  said as soon as he knew someone was on the back of his Snogo he turned and told him to get off.

He and Aklestad plan to ask the Iron Dog board to overturn the ruling. "We'll talk to a lawyer if we have to. That's our next step."