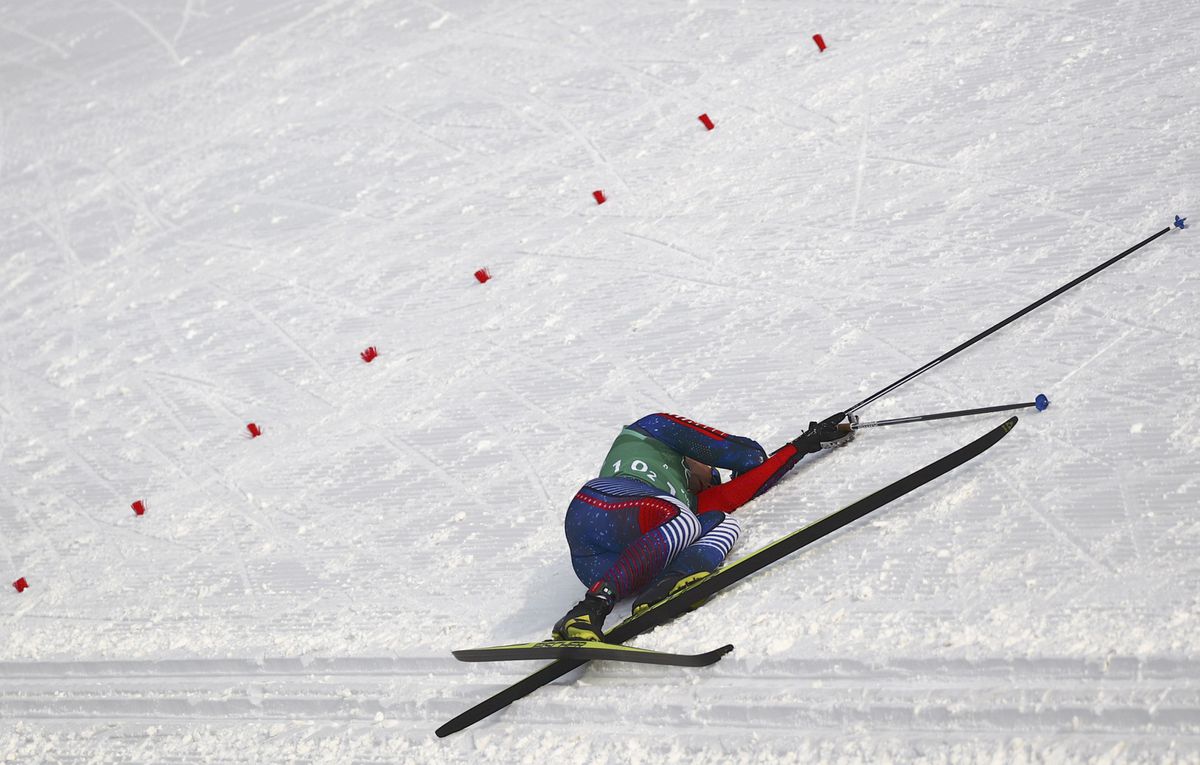 Reese Hanneman collapses after finishing his leg in the men’s 4x10K relay at the Winter Olympics. (REUTERS/Carlos Barria)

Reese Hanneman collapses after finishing his leg in the men’s 4x10K relay at the Winter Olympics. (REUTERS/Carlos Barria)

Saturday night, they were battling the planet's best skiers as members of the U.S. men's relay team at the Winter Olympics in Pyeongchang, South Korea.

The Americans finished last in 14th place, more than nine minutes behind the gold medalists from Norway.

"Wowzers," Hanneman posted on Instagram. "Olympic relays are on a completely different level!! So proud of my teammates @andynewellskier@scottgpatterson @hoffnoah and honored to be part of #TeamUSA."

The team was a blend of veterans and newcomers – four-time Olympian Andy Newell of Vermont, 34, and two-time Olympian Noah Hoffman of Colorado, 28, plus the Olympic rookies from Alaska – Patterson, 26, and Hanneman, 28.

"We knew we weren't going to get medals," Patterson told USA Today. "We also knew some of our higher-end distance guys were sitting out to save it for the team sprint. Coming in, the goal was to finish."

"I was a long shot of catching anyone," Patterson said. "I put out a really strong first effort, the first loop out of three, then I started to fade. I think I gained a little bit on Russia on the first loop and I was hurting the next two."

While the women's cross-country team has gotten all of the attention in South Korea as it pursues – so far, futilely – its first Olympic medal, Patterson is quietly having a very good Olympics.

He placed 18th in his debut, the 30K skiathlon, and was 21st in the 15K freestyle. He will get another start in the 50K on Saturday (Friday night in Alaska).

"I've had two great races," Patterson said. "… It's been an awesome experience. The Olympics are hard to beat."

One of the greatest moments of the 2018 Pyeongchang Olympics came last week at the end – the very end – of the men's 15-kilometer freestyle race when Mexico's German Madrazo was given a hero's welcome at the finish line, some 36 minutes after the gold-medal had been decided.

You can thank Soldotna High graduate Andy Liebner for making it possible.

Liebner, a 2001 Soldotna graduate who skied for UAA, lives in Cheboygan, Michigan, these days. He is the founder of the U.S. Ski Pole Company, which manufactures ski poles, and he is a coach with considerable experience.

Madrazo is a 43-year-old endurance athlete who finished the Ironman World Championship triathlon last year. When someone sent him an article that said cross-country skiing is the toughest sport in the world, he was intrigued.

When he read that Liebner had helped Carcelen qualify for the 2014 Olympics, he picked up his phone.

"I didn't know who Andy was," Madrazo told the Peninsula Clarion prior to the Olympics. "It was the craziest decision of my life, but it turned out to be one of the best."

That was in December 2016. In January 2017, Madrazo began skiing. A year later, he met the qualifying standard for the Olympics.

And now he is one of the faces of Pyeongchang.

More than 30 minutes after Cologna had repeated as the 15K Olympic champion, Madrazo approached the finish line, the final skier in the race. Someone handed him a giant Mexican flag. He carried it as he skied, somewhat shakily, across the finish line, where a reception committee waited.

They were stragglers in the race too, skiers from countries where there is little or no snow, much less cross-country skiing. The four of them – athletes from Colombia, Tonga, Morocco and Portugal – greeted Madrazo with a bear hug and then hoisted him on their shoulders.

Liebner was still on his way to the stadium, according to the Clarion, so he didn't get to see it happen. But he heard it.

"He's become famous amongst all athletes around, from his personality of supporting everyone in their events and even his own competitors," Liebner told the Clarion. "He's always had the heart of what we all believe an Olympian has to commend everyone from everywhere to do the best they can.

"I'm so proud on many levels. This was one athlete who had no chance at the gold medal, but won the gold in the hearts of all the viewers and his own competition."

Ashley Wagner didn't qualify for the Olympics in figure skating but her live tweets are medal-worthy. She grew up in Eagle River and began skating here, which means she knows Girdwood's Keegan Messing from way back. During the men's free skate, she shared this:

Fun fact...Keegan Messing taught me everything I know about yoyo tricks when we were kids. #TheMoreYouKnow

Other observations and insights shared by Alaska athletes in Pyeongchang:

Everyone’s Olympic dream has a different outcome, and unfortunately mine was cut a little short when I ruptured both of my Achilles in training yesterday. I appreciate all the love sent my way already, sorry if I haven’t responded, definitely taking some time for myself at this moment in time. However I’m staying SUPER positive and optimistic and excited to get even better and stronger this summer. Thankful I get to stay and cheer on my teammates as they show the world what they’re made of the next two days. You know I’ll be cheering the loudest from the sidelines ❤️

Hongsu Hill! “Hongsu” 홍수 means “flood” in Korean! Have you been watching the 2018 Olympics? Have you seen the big, steep sprint hill above the stadium, the last uphill before the finish of every cross-country race? I thought this hill needed a name, since the lactate-flood from climbing it is brutal. As I was writing a course preview article in the fall, based on racing in PyeongChang last February, I gave the hill an alliterative, (hopefully) poetic name. And then it made me pretty happy to get here to the Olympics and follow up, to write the name on the side of the hill itself! 🏔 #HongsuHill #namedclimbs #crosscountryskiing #Olympics #Pyeongchang2018 #bloglinkinprofile

Best moment of the day was sharing a hug for hard fought efforts out there. So proud of our entire team, beyond just the 4 of us in bibs today, for daring to dream and going for it! And a special thanks to our amazing teammates, coaches, techs, staff and all our supporters! ❤️🇺🇸💪🏻 #teamhug #relaypower