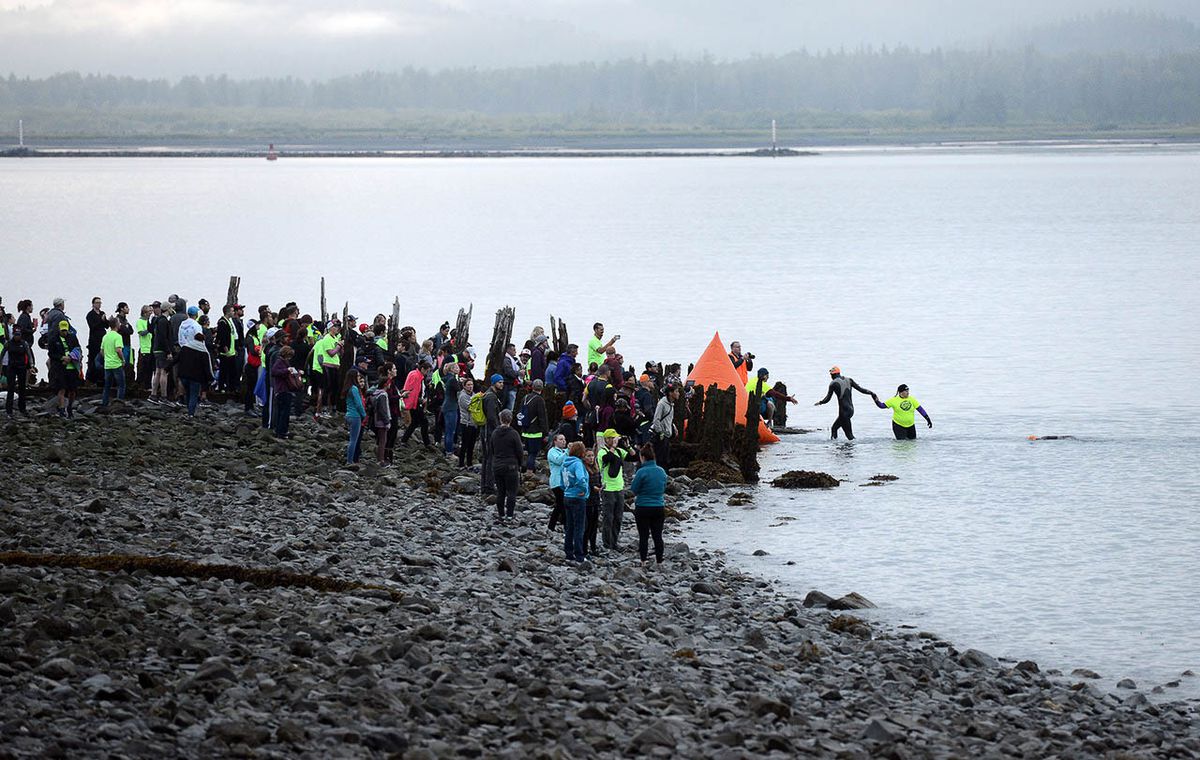 Will Ross made sure an Alaska man ruled the Alaskaman Extreme Triathlon on Saturday.

Ross, a 29-year-old from Anchorage, won the second annual race that puts athletes through a 143-mile torture test across Southcentral Alaska.

The race begins in Seward with an open-water swim in Resurrection Bay and ends in Girdwood with two consecutive runs up and down Mount Alyeska.

"Each sport had the highest of highs and the lowest of lows," Ross said by phone after the race.

Among the lows: The early part of his swim in frigid Resurrection Bay, and the back-to-back ascents and descents of Alyeska.

Among the highs: Running on the soft, rolling Winner Creek trail. And reaching the finish line.

A field of 228 racers, 50 of them Alaskans, contended with cold water during the swim, and high temperatures and sunshine for everything else.

Morgan Chaffin of Elkhorn, Nebraska, defended her title in the women's race. She finished in 14:03:20, more than an hour slower than her winning time of 12:47:50 last year.

"It didn't get too hot on the bike just because you're moving so fast you've got the breeze, but man, the run was hot, and there's no wind in the mountains," Ross said. "There was a slight tail wind a couple times, but a hot tail wind when you're already hot, that's the worst."

Ross is one of Alaska's most seasoned and successful triathletes. He's a nine-time winner of the Hammerman Triathlon at Kincaid Park and he competes professionally in the XTERRA off-road triathlon series. Earlier this month, he claimed fifth place in the July 9 XTERRA triathlon in Victoria, British Columbia.

XTERRA triathlons are typically 25 to 30 miles long, so Saturday's race was a significant chance of pace for Ross.

"This isn't quite my style, but to have such a big event in my backyard — I couldn't miss it," he said. "I had to do it at least once.

"I'm an off-road triathlete and that's where my passion lies and what's fun for me. This had its fun moments, but it also had its not-so-fun moments."

The swim was no fun at the start, he said. It was 50 degrees when the race began at 4:45 a.m. Saturday, and race officials said the water temperature was 56 degrees, although Ross suspects it was lower.

"For the first 15 minutes, it was almost a panic trying to keep breathing and keep everything functioning properly. But once I got going it was amazing to be out there. The water was so calm, and there were so many spectators."

The best part of the race, he said, was running on the Winner Creek trail and nordic loop. Not only did the trail provide relief after running several miles on pavement, it was packed with spectators.

After that came the most painful part of the race — two trips up and down Mount Alyeska.

"The mountain was hard. I was blown away by how hard the second time was," Ross said. "You hear people talk about Mount Marathon, and it's the downhill that ruins people's legs. The first time down (Alyeska) it's almost 3,000 feet, and the second time is 2,000 feet. Back to back. That's a lot."

That's why Ross planned to ride the tram to the top of Alyeska a couple of hours after his race ended so he could cheer for his fiancee, Andrea Kettler.

And he doesn't have to.

He and Kettler are getting married Aug. 4, and they made a deal at the start of the summer: After the Alaskaman, they would take a two-week break from serious training in order to get ready for the wedding.

"I gotta say, a race this big and a wedding in one summer, it's a lot," Ross said. "It's a little overwhelming for both of us. I'm happy to see success in the first one."