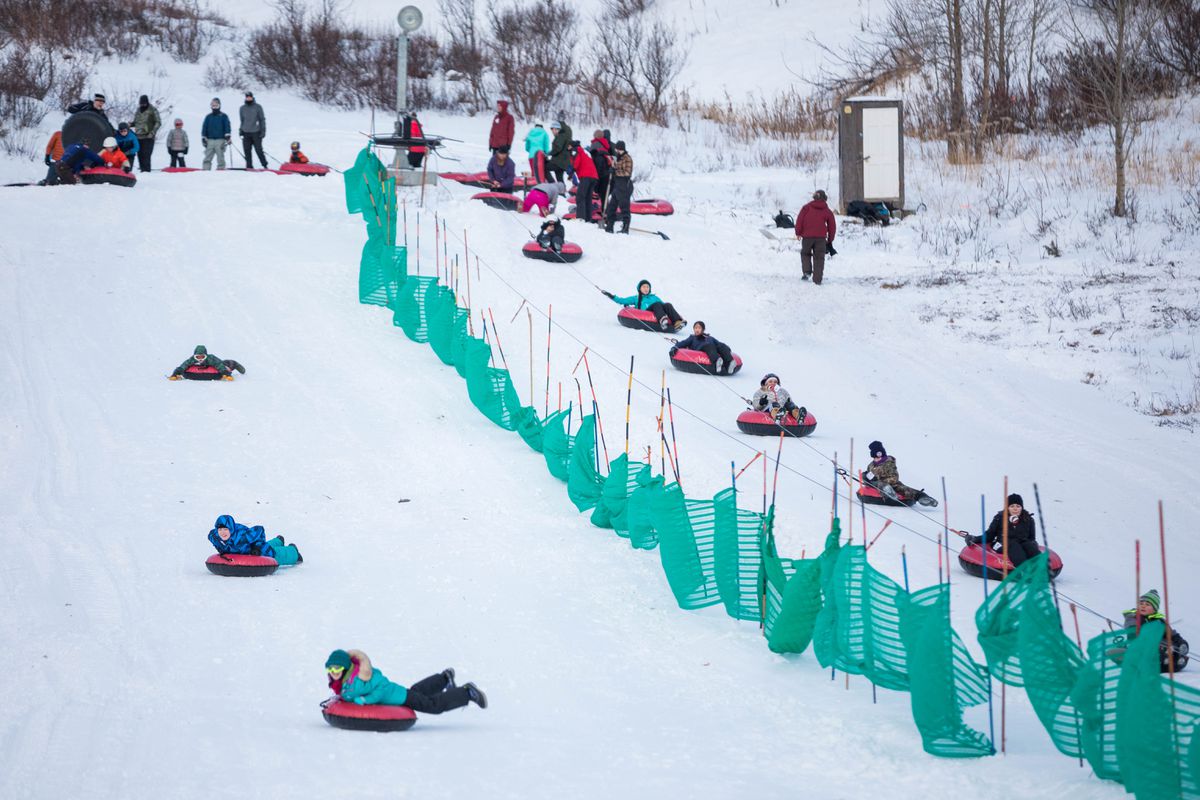 Things are getting busy at Arctic Valley Ski Area, where the tube park will open this weekend and the mountain’s first ski team in 20 years is ready to run gates.

The tube park will be open Saturday and Sunday, said John Robinson-Wilson, who spent part of Tuesday grooming the ski hill just north of Anchorage.

“We’re going to go for sure, barring anything catastrophic,” he said. “The weather looks good through this weekend, so I don’t see any reason not to do it.”

“We always sell out, and we hate for people to drive all the way up and not be able to get a ticket,” Robinson-Wilson said.

Arctic Valley Road, the steep, partly unpaved road that leads to the ski area, is in the best condition it’s been in all season, he added. It hasn’t been graded but it’s snow-packed and driving nicely, he said.

Arctic Valley isn’t ready for skiing and Alyeska hasn’t opened yet either, leaving Hilltop Ski Area in South Anchorage the only place in the Anchorage bowl with daily alpine operations.

Alyeska on Tuesday reported five inches of new snow and temperatures favorable for snow-making, which is good news for the Girdwood ski hill, which had to cancel its scheduled Dec. 7 opening due to lack of snow.

Arctic Valley needs at least another foot of snow before it can open its slopes.

“The top has lots of snow, but that melt-off (last week) stole all the snow at the bottom,” Robinson-Wilson said. “We need another 12 to 18 inches on the bottom.”

When the mountain does open, the newly formed Arctic Valley Ski Team will be ready to rock it.

Nearly 80 kids ages 6 to 16, ranging from beginning skiers to experienced racers, are on the team, which is reforming this winter “after a hiatus of about 20 years,” said Luke Clement, the director of operations at Arctic Valley.

“It kills me to see ski racing go away because it’s cost prohibitive,” Clement said. “I grew up loving it. Being on the (Anchorage Ski Club) board, I pushed this through and it caught a lot more wind in the sails than I anticipated.”

There was enough interest for a race division and a recreational division. The rec division, which includes one day of training each weekend and costs $250 per kid for the whole season, already has 48 kids signed up. It will be capped at 60, Clement said. The race division will provide skiers with several days of on-snow training each week.

Arctic Valley will host two races this winter — a Youth Ski League race in February and a USSA spring series in April.

“It is really exciting,” Clement said of the ski team’s resurrection. “It’s the only way really to keep the ski area alive. Kids are the lifeblood of that place, and if there aren’t kids, the place is dead.”

A few other things are in the works at the ski area, said Clement, a commercial pilot who raced for Alyeska Ski Club as a kid.

“We’re bringing the rope tow back for the first time in about 20 years,” he said. “It’s a 500-foot long rope tow, so parents can watch their kids ski from the deck.”

The recent acquisition of a winch-cap groomer allows Arctic Valley to groom terrain that had never been groomed previously.

“We can groom the T-bar and open up terrain for intermediate skiers. It allows us to groom steeper terrain — (before) we were unable to groom most of our hill,” Clement said, “We picked it up three years ago and it has been a total game-changer for us.”