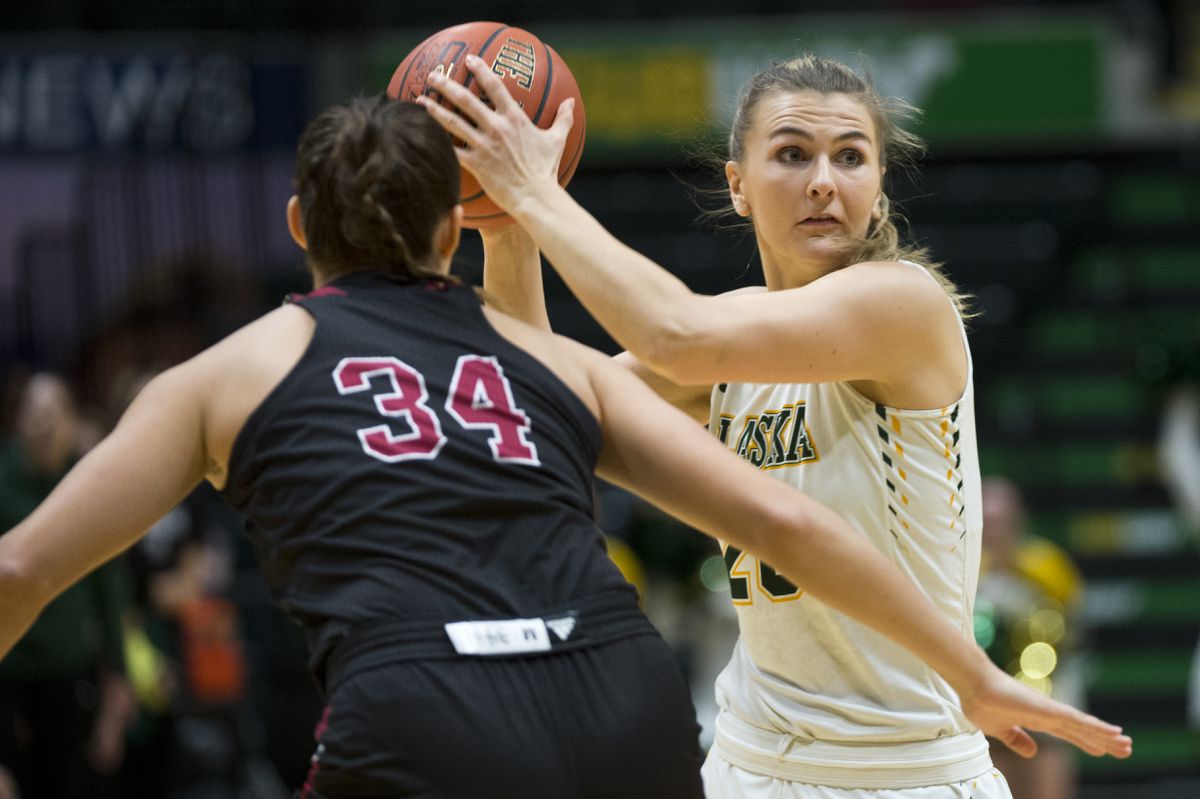 UAA senior Hannah Wandersee’s journey as a reserve to All-American on the women’s basketball team is as rare as they come.

Wandersee came to UAA from Kodiak, where she was a standout high school basketball player who led the Bears to an undefeated season and state title her senior year.

On Friday, she’ll lead the eighth-ranked Seawolves (28-2) into a first-round NCAA Division II Tournament game against Hawaii Pacific at the West Region championships in La Jolla, California. The game begins at 11 a.m. ADT.

Before an illustrious senior campaign that saw the 6-foot-2 center become the first Alaska woman to capture Great Northwest Athletic Conference’s Player of the Year honors, Wandersee was on the bottom of the Seawolf totem pole.

As a redshirt freshman in 2015-16, Wandersee joined a juggernaut squad led by All-American forward Megan Mullings, who led the Seawolves to a 29-2 record and a runner-up finish in the NCAA tournament.

“I think any freshman questions whether they are cut out for college basketball and if their program is the right fit for them, and honestly there were many days I wanted to quit,” Wandersee said.

“But, it is like anything in life that is tough, if you keep working hard and giving your best effort and don’t give up, good things are going to happen.”

Battling a player of Mullings’ caliber in practice had its perks, instilling a sense of mental toughness and competitiveness and “setting the tone for the rest of her career,” McCarthy said.

Wandersee quickly befriended and worked out regularly with Devine, who according to Wandersee was a role model who “set the standard” for the women’s basketball program.

Consistently rubbing shoulders with Devine and Mullings early in her career shaped Wandersee’s work ethic and positive habits, catalyzing her growth as a player.

“(Wandersee) buddied up with Alysha Devine, worked out and got extra shots up. … It was contagious throughout our team,” said assistant coach Shaina Afoa, a Dimond High grad and former Central Washington player who works closely with Wandersee and UAA’s other centers and low-post players.

In her first season of action, Wandersee came off the bench to contribute 4.8 points per game for the Mullings-led team that went all the way to the NCAA Division II national championship game, where the Seawolves lost 78-73 to Lubbock Christian.

Mullings was gone by the time Wandersee’s sophomore season rolled around, but Wandersee still played behind seniors Devine and Sierra Afoa. She continued to improve and bumped up her scoring average to 7.0 points per contest.

By the time she was a junior, Devine and Afoa were gone and the Seawolves were left with voids at the center and power forward positions. A spot was Wandersee’s for the taking, but expectations were modest.

When UAA traveled to Durham for a season-opening exhibition matchup against Duke, Wandersee let loose with a 19-point, 11-rebound performance against the No. 12-ranked Division I powerhouse Blue Devils. This was Wandersee’s coming-out party, where she emerged as a player who could follow in the footsteps of Mullings as an All-American.

“Her junior season, we did not have high expectations for that position. We thought that it would be, more or less, a role that Hannah would step into,” McCarthy said. “We didn’t have an expectation that she needed to be an all-conference player.”

Even though UAA lost to Duke 87-56, Wandersee viewed the game as a “big confidence booster” that was an indication that she could “do that well against some of the highest competition out there.”

She carried that momentum into her junior campaign. She earned All-America recognition and all-GNAC first-team honors for leading her team in scoring (14.8 points per game), rebounding (6.3 per game), field goal percentage (52.4 percent) and blocks (1.5 per game). With Wandersee taking the reigns, the Seawolves surged to a NCAA tournament Sweet 16 appearance.

Now it’s her senior season and the honors are pouring in. She was named the GNAC Player of the Year and Thursday she collected first-team all-West Region honors as one of five players deemed the best in the 36-team region.

She’ll graduate with a natural sciences degree in the spring, and she plans to branch out in life.

“I do not plan to pursue basketball further and am excited to see what I enjoy outside of it and explore different career options,” she said.

When her career is over, Wandersee will remain etched in program history as a player who blossomed from a redshirt reserve into one of UAA’s most decorated players. She’s had a hand in more victories than any other player in program history, and she’ll finish in the top 10 in career blocks, games played, field-goal percentage and free-throw percentage.

“I still can’t believe it. I mean there is so many people I want to thank that have helped me and pushed me over my five years," she said. "UAA is such a special program and if you buy in completely, you can do special things.”