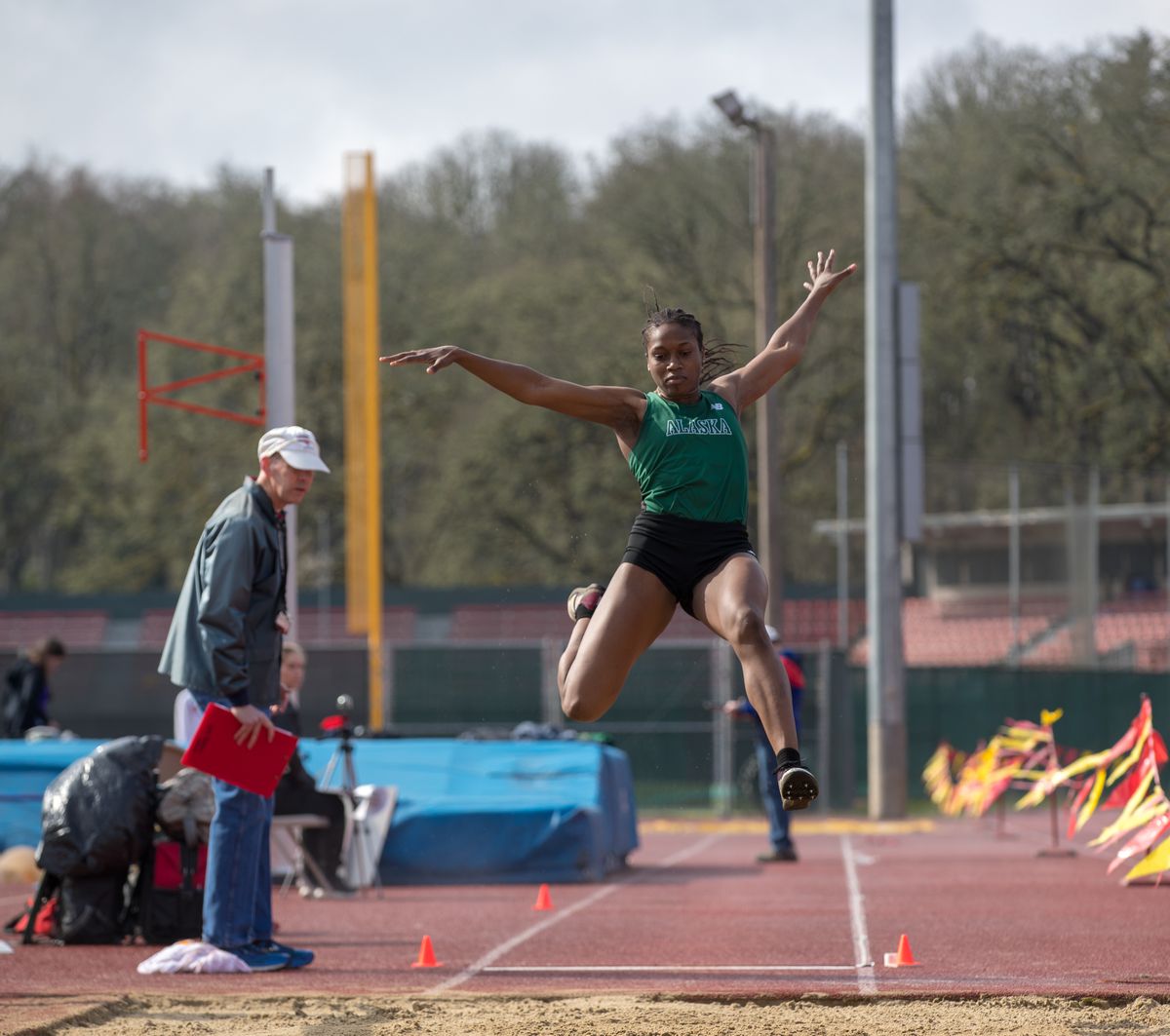 When dominant multi-sport athletes come to mind, Bo Jackson and Deion Sanders are on everyone’s list.

Alaskans can add UAA senior Chrisalyn Johnson to their list.

Johnson, a four-year volleyball star who completed her eligibility in November, has joined UAA’s track team this season and is already turning heads. In her first collegiate meet, she set UAA’s triple-jump record (39 feet, 11.5 inches) — breaking a record set more than a decade ago by Kim Brady (39-3.75) in 2008.

In the same meet in Oregon on March 23, Johnson also won the long jump by a landslide with a jump of 18-2.25. With such a dominant performance, Johnson leaped her way into a bid in the NCAA Championships, a No. 5 Division II ranking and No. 4 spot on the Great Northwest Athletic Conference all-time list.

“I would’ve said by the end of the year she would’ve went over 12 meters (in the triple jump), but for her to do it in her very first meet just speaks to the athlete that she is," UAA track and field assistant coach Ray Shadowens said. “It’s incredible.”

In California on Saturday at her second collegiate meet, Johnson continued to raise the bar — breaking the program’s long jump record (18-10.5) set by Karolin Anders in 2014 with her jump of 19-2.5.

Johnson racked up the accolades as a volleyball player as well, garnering all-conference honors as a junior and senior, maintaining all-academic team honors from her sophomore to senior year, and leading the Seawolves to two GNAC titles and three straight NCAA tournament berths — finishing as the NCAA D-II national runner-up her sophomore year.

Despite having competed in track and field in high school, the transition from volleyball “didn’t just happen automatically,” Johnson said.

Johnson began training with the track team in November at the end of UAA’s volleyball season and officially joined their ranks at the beginning of the indoor season in January. Despite having used up all of her volleyball eligibility, Johnson remains eligible for two semesters of track and field since NCAA Division II athletes are allowed 10 semesters of varsity athletics.

“UAA has known about her since high school being as talented of an athlete as she is,” Shadowens said. However, knowing that volleyball was her primary sport, UAA’s coaching staff opted to “not push the issue” and “let her enjoy her volleyball career.”

Johnson did seriously consider choosing track and field over volleyball after high school but opted for the latter due to her passion for volleyball.

“I’m not super regretful for (the decision) at all, but I’m extremely happy for the opportunity that I’m able to do track as well because if the coaches didn’t approach me and welcome me on (the team), I wouldn’t be where I am right now," Johnson said.

Known as a fiery competitor on the volleyball court, Johnson carried what Shadowens called a “winning and competitive mentality” over to track and field despite the two sports’ vast differences — especially with volleyball being a team sport and track and field being largely based on individual performance.

“We might be individually fighting for certain things, but as a team we’re contributing as a whole to the team score. It’s kinda nice that I didn’t have to change the way I thought,” Johnson said.

Johnson and the Seawolves have the next couple of weeks off before heading back to California for three meets from April 18-20.