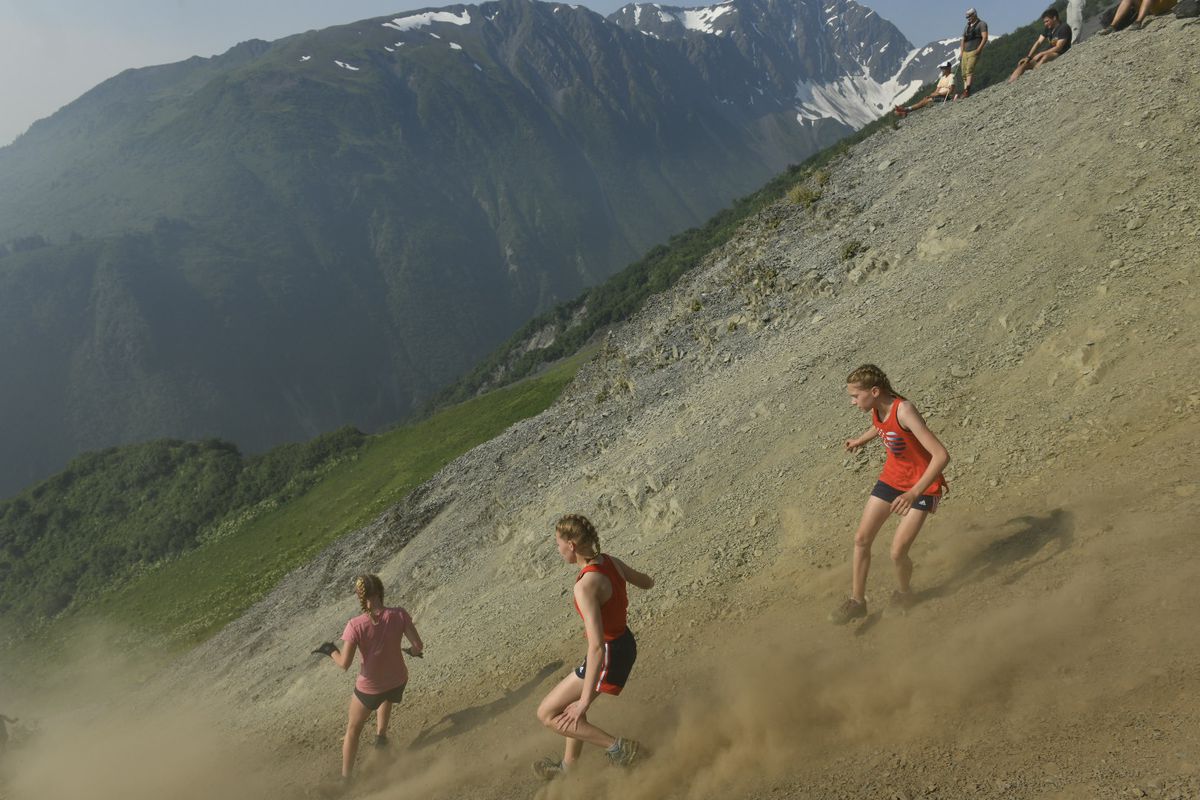 SEWARD — It was Adrianna Proffitt’s final year to run the Mount Marathon junior race, and she was ready to rock it. She did everything she could to prepare herself, from training hard in the weeks before the race to showing discipline the night before it.

“We went to bed early. I missed the fireworks,” she said. “Then I got to the start and I heard them say, ‘It’s canceled.’ My heart dropped.

"I took off my gaiters and was going back to my room and I heard, ‘They’re getting ready to start.’ ”

The rebellion was on, and the force was with it.

Undeterred by air-quality index numbers that prompted organizers to cancel the junior race for the first time since its creation in 1964, about 80 boys and girls ran the race anyway, to the cheers of thousands of spectators.

They had no official clock and the downtown finish line was barricaded, but they were able to run around the official finish line and into the finish chute, where race officials welcomed them with water to drink and running hoses to cool off with.

Sebastian Szweda Mittelstadt, 17, won the race in an unofficial time of 29 minutes, 19 seconds. “That’s a PR for me,” he said.

Like Proffitt, Szweda Mittelstadt was motivated to run because it’s his last year as a junior. Next year, they’ll both be 18 and eligible for the senior race, which goes all the way to the top of the 3,022-foot peak that stands guard over Seward.

Thursday morning brought clear, blue skies and very little smoke from the Swan Lake wildfire. It was warm, but not hot.

“It was perfect,” Szweda Mittelstadt said. “Best it’s been all year.”

Caption
Junior runners do the Mount Marathon junior course, despite the cancellation of the race, July 4, 2019. (Marc Lester / ADN)
Wait 1 second to continue.

It was the worst for Mikey Connelly of Eagle River.

Connelly won last year’s race in 26:56, the fastest time in years. He immediately set his sights on Bill Spencer’s decades-old record of 24:30, and has spent the last year preparing for Thursday’s race. At the recent Bird Ridge run, he finished fourth, beating many men who are top-20 Mount Marathon runners.

When Connelly heard Thursday morning that the race had been canceled, he was deflated. Disappointment consumed him. By the time he heard kids were running anyway, he was too emotionally defeated to race.

“I’d been training for this since August,” Connelly said. “It was like I built a house and someone lit it on fire."

Szweda Mittelstadt said there was little doubt that he would run, cancellation or not. When race officials called off the junior race about an hour before it was due to start, he was among a number of runners who carried on with their race plans.

“OK, we’ll take a group up the mountain and have some fun,” Sweda Mittelstadt said. “Everyone was cheering, so it felt like a real race.”

It was a real race. Szweda Mittelstadt and Ali Papillon, a 14-year-old from Boulder, Colorado, dueled for much of the race, which goes halfway up the mountain and back.

They traded the lead up and down the mountain, with Papillon reaching the turnaround point first. He took a spill on the steep downhill but got back up and caught Szweda Mittelstadt shortly after the race left the mountain.

Szweda Mittelstadt won the race on the road, passing Papillon when the race hit the final stretch a couple of blocks from the finish line. Papillon didn’t wear a watch so he didn’t know his time.

Noelle Spencer won the girls race. Race fans are familiar with her name if not with her — she’s the daughter of Bill Spencer, who owned the senior men’s record for 43 years and set the still-standing junior record in 1973.

Race officials made the decision to cancel the junior race on Thursday morning after a sensor downtown showed an air quality index of 172, "which is categorized as ‘unhealthy,' " the race website said.

Race officials had set the acceptable air quality index at 100, "which would be categorized as ‘unhealthy for sensitive populations,' " according to the race website.

This year’s junior race will go down in the record book as a canceled event, but those who ran anyway know otherwise.

Proffitt, a Cook Inlet Conference ski champion for Chugiak High, wore a red, white and blue ensemble appropriate for the Fourth of July. When she first heard the race was canceled, “I felt defeated.”

Then she got back into race mode — and Mount Marathon mode.

“It’s the spirit of the race, and it was out there today." Proffitt said. “Everyone was so supportive. We were having fun and enjoying the mountain on the 4th.”

Correction: An early version of this story misspelled the name of the unofficial junior boys winner, Sebastian Szweda Mittelstadt.