The wind roars at Anchorage RunFest, and so do the women 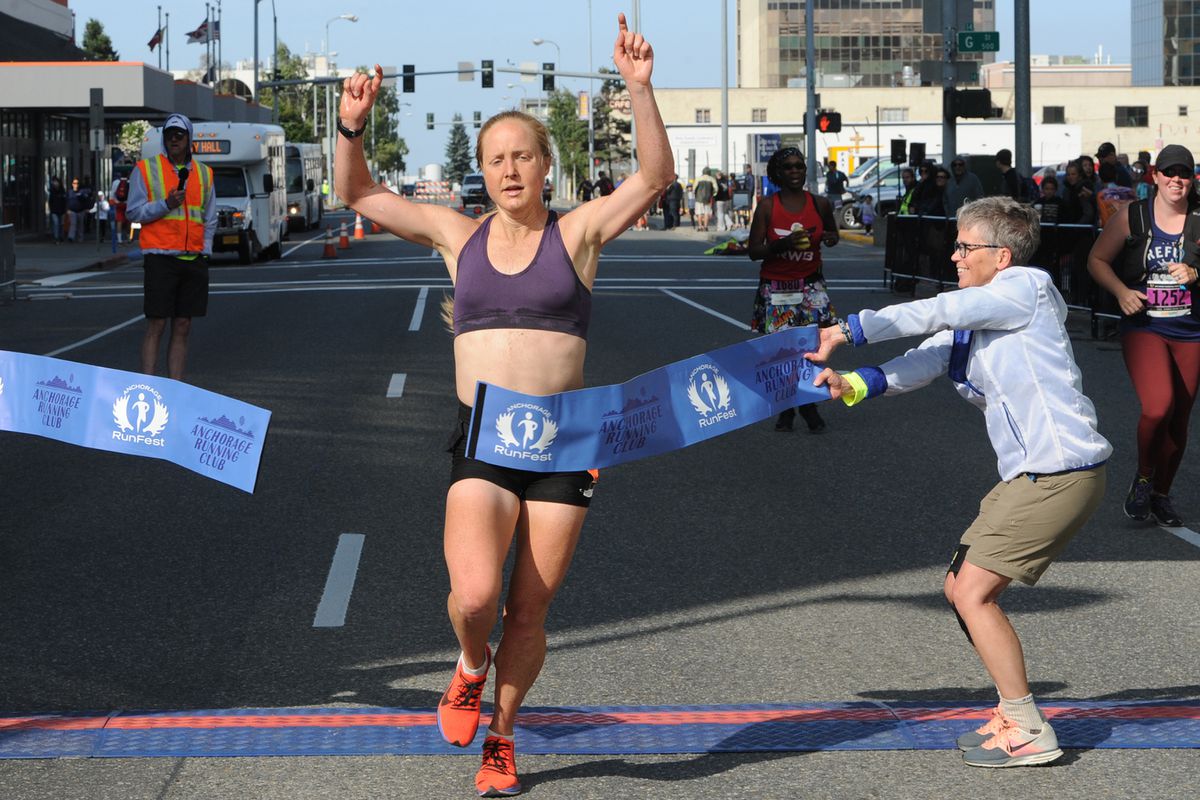 Keri McEntee of Fairbanks was the overall winner and set a women's record in the Humpy's Marathon during RunFest in downtown Anchorage on Sunday morning, Aug. 18, 2019. (Bill Roth / ADN)

Keri McEntee of Fairbanks was the overall winner and set a women's record in the Humpy's Marathon during RunFest in downtown Anchorage on Sunday morning, Aug. 18, 2019. (Bill Roth / ADN)

The winds of change blew through downtown Anchorage on Sunday, when a woman grabbed the overall victory for the first time in the three-decade history of the Humpy’s Marathon.

A real wind blew too, toppling at least two trees on the race course, blasting sand into runners’ faces and forcing officials to take down the giant, inflatable arch marking the finish line near Town Square.

Second place in the marathon went to Cody Priest, the Chugiak cross country coach, the top man in 2:52:17. He wasn’t at all bothered to finish behind a woman — especially a woman like McEntee, who is headed to the U.S. Olympic marathon trials next year.

“No shame,” Priest said. “With that caliber of running, no shame at all.”

The 26.2-mile marathon was one of four distances contested Sunday as part of the Anchorage RunFest.

The wind took its toll on nearly everyone and everything.

Two trophies broke when they blew off a table set up in Town Square, and the finish line arch was trouble all morning. The first time it blew down, volunteers used wire to anchor it to a truck after putting it back up. Around noon, with hundreds of racers still on course, it came down for good.

“It was becoming a liability,” said Mark Iverson of the Skinny Raven timing crew.

The wind took down two trees where the course goes through Tikishla Park, “so we had to jump over them,” Priest said. “It was like steeplechase.”

Volunteers arrived soon with chainsaws, so not everyone had to test their hurdling skills.

Nothing was as bad as the sand-blasting absorbed by marathoners and ultramarathoners on the Coastal Trail near Point Woronzof. Sand from Cook Inlet filled the air and covered the trail.

“Oh my gosh, my eyes,” said fourth-place ultramarathoner David Johnston of Willow. “I couldn’t see. It got in your teeth. On the bike path (near Point Woronzof) you could see everybody’s footprints, because there was a quarter-inch of sand on the ground.”

Said Priest, whose arms were covered by fine silt that made them feet like sandpaper: “Racing always requires grit. But today there was plenty of grit, thanks to the sand from the wind.”

Said McEntee: “That was awful.”

“You couldn’t see anything,” she said. “All I could taste was sand.”

McEntee said she had never before claimed an overall victory while racing against men, but she had an idea it could happen Sunday.

By clocking 2:49:40, McEntee shaved more than a minute off her record of 2:50:48 set last year. She was well off the personal-best 2:41 she ran earlier this summer, which qualified her for the U.S. Olympic marathon trials in February.

McEntee came into the race fresh off a two-week vacation in Costa Rica — a trip paid for in part by the airline ticket she won for winning last year’s marathon.

“It was really motivating to have just gone,” she said, because the trip was a vivid reminder of what a RunFest victory is worth.

McEntee wasn’t the only one inspired by the prospect of winning a plane ticket.

Ken Bereski of Miami Beach, who won the 49K in 3:39:53, is living frugally since suffering a traumatic brain injury in 2015 when a hit-and-run driver struck him on his bicycle. The prospect of winning a plane ticket spurred him to enter the RunFest.

Bereski said he lost his business as a self-employed technology consultant after his injury and has spent the last couple of years couch-surfing and using mileage awards to travel to races.

He said he used five different airlines to get to Anchorage. He took a layover in Chilliwack, British Columbia, where he ran a 3:19:41 marathon on Saturday and then flew to Alaska. He spent the night at the Anchorage airport and walked to the downtown start line Sunday morning.

Sunday’s RunFest was dedicated to Tom Coolidge, a long-time member of the RunFest race committee and an avid trail runner who trained with Alaska Winter Stars. He died at age 68 last year.

Numerous runners wore black-and-white ball caps that memorialized him, and some wore T-shirts with photos of him in the Alaska outdoors.

Shelley Coolidge, his wife, walked the half marathon course with a sister and a friend. Her T-shirt had a picture of Tom riding a fat bike in the Iditarod Trail Invitational on the front and a picture of him holding up a fish in Seward. The sister wore a T-shirt with a photo of him at Mount Marathon, where he twice set age-group records, and the friend wore one with a photo of him climbing Bomber Glacier.

Other family members also participated Sunday, including two daughters and their husbands, two nephews, and Shelley Coolidge’s sister and brother-in-law from Maryland. On Saturday, the couple’s three grandchildren ran a 2K race for kids that was also part of the two-day RunFest.

“Tom loved events like this that brought people out to participate,” Shelley Coolidge said. “It’s a hard day, but it’s a real honor.”