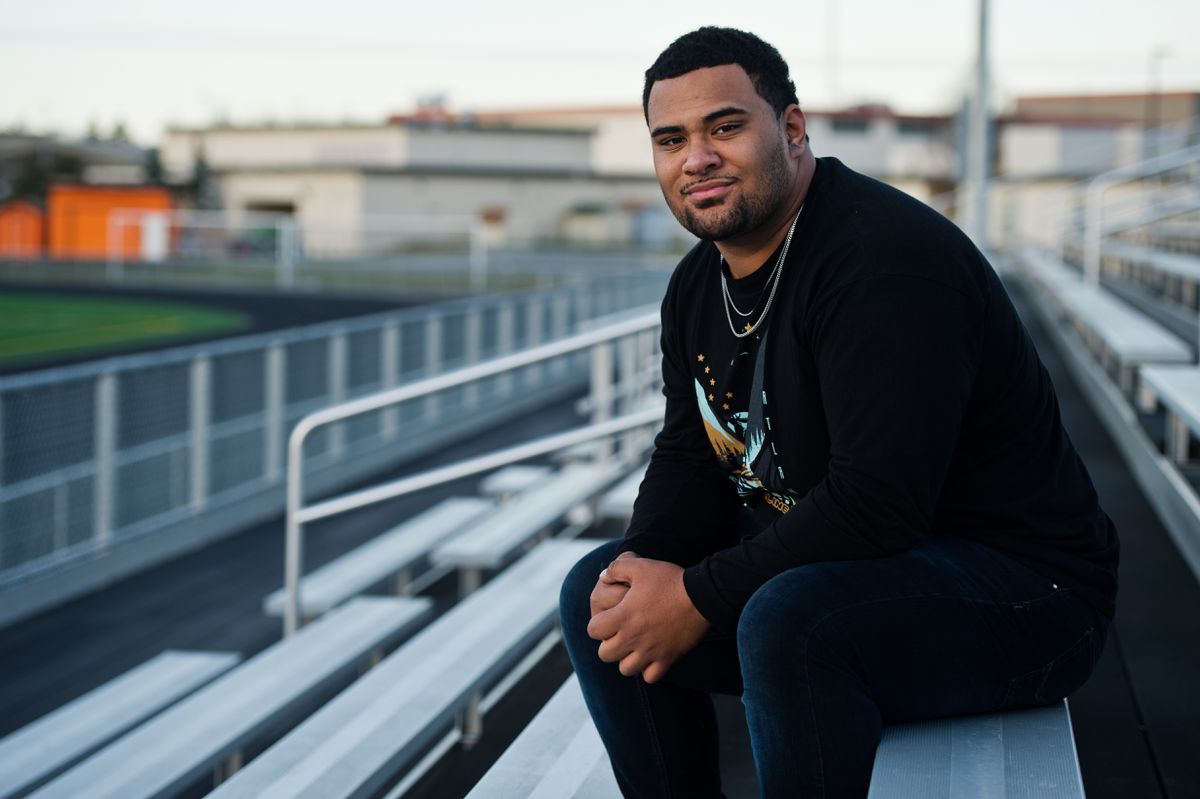 West High senior Alani Makihele is a proud veteran of Boys & Girls Club football, which he said fostered a love for the game that will likely pave his way to college.

Makihele is an imposing 6-foot-5 and 330 pounds, and he is this year’s Division I offensive lineman of the year in Alaska. As a grade-schooler he exceeded the weight limits for Pop Warner football but found a place to play at Boys & Girls Club, which allows bigger kids to play in limited positions and capacities.

Now, Boys & Girls Club is ending its football program in Anchorage, and Makihele worries what will happen to other kids built like him, including his 9-year-old brother Gideon.

“Gideon is too big to play Pop Warner. His football days are done, and we’re a football family,” Makihele said.

Declining participation led to the demise of the program, said Alana Humphrey, the CEO of Boys & Girls Club Alaska.

“The only reason we’re dropping it is the numbers have declined over the past six years and we can no longer have a viable league in the different age divisions,” she said. “It’s certainly a numbers decision.”

Humphrey said the tackle football program drew about 500 players at the beginning of the decade but plummeted to about 100 this year.

Numbers this year were so low the U10 division age group was eliminated, leaving the club with two divisions — U12 and U14. Gideon Makihele played with the 12-year-olds, but now he and kids of a similar size may not have a place to play next year.

Pop Warner uses an age-weight matrix that doesn’t accommodate kids like Gideon, who weighs a little more than 100 pounds, according to his mom. Boys & Girls Club allows the bigger kids to play, but places restrictions on them — they can’t be ball handlers and some can only play on the offensive line.

“This ends the football futures of a lot of linemen,” Makihele tweeted when he heard about the end of Boys & Girls Club football.

Just heard that Alaska boys and girls club is closing their football program. I was always too heavy for pop warner weight limits, this was the only place i could play football and where my love of football started. This ends the football futures of a lot of linemen. @sportsadn pic.twitter.com/8OOXUgiYt3

Boys & Girls Club and Pop Warner are the only youth football programs in Anchorage where kids can play organized tackle football before they’re in high school.

Stan Brown, the president of Alaska South Central Pop Warner, said his group “is definitely trying to figure out a way to accommodate those kids” who played Boys & Girls Club Football.

“We’ve always had a division nationally called ‘unlimited’ where there is unlimited weight, which we did try four years ago,” Brown said. “But we felt like we lost more kids on the lighter side than we gained on the heavier side.”

About 700 kids played Pop Warner football this year, Brown said. He didn’t have year-by-year numbers but said participation dropped several years ago and has plateaued the last couple of years.

The drop in participation follows a nationwide trend attributed largely to concern about head injuries.

A recent New York Times report said high school participation across the country is down 10 percent since 2009.

A New York Times review shows that football — a sport that for a century has been a fundamental part of American identity — is in decline. It's become mired in controversy over safety and must compete harder each year with other sports.https://t.co/pfvURjDiAl pic.twitter.com/MsSONiL6aj

In Alaska, high school football participation has dropped 25 percent in the last decade. In 2011, 2,118 boys and girls played tackle football, according to the Alaska School Activities Association. This season, the sport drew 1,382. The two high schools in Juneau fielded a single team this season, and a handful of smaller schools struggled at times to put 11 players on the field.

In Anchorage, numbers dropped sharply in the last few years, according to numbers provided by the Anchorage School District. In 2014, tackle football drew 820 kids at the city’s eight public high schools. In 2018, that number was 658.

“It’s been a scary thing as far as football going away pretty much cross-country the last five years or so,” Brown said. “We’re not the only ones hurting for numbers.

“It does stink to see a local program fold, but I can understand — with the price and trying to stay up with all the safety stuff, it can be expensive.”

She’s also concerned it will limit options for players of Pacific Island heritage, who like her sons tend to be big.

Makihele said she understands the concerns about safety, and Humphrey said Boys & Girls Club is aware of those concerns and has addressed them over the years.

Programs like the Heads Up Football safety program, funded in part by the NFL Foundation, work with high school and youth programs to teach coaches safer ways to make tackles. Concussion protocols are now a routine part of the game, as are more stringent safety requirements for helmets.

“I certainly think that’s a factor,” she said. “I think that’s probably the reason there are parents who choose not to do it, even though there have been improvements in how kids practice, limited contact and other things we have implemented over the years.”

In 2016, Boys & Girls Club added a flag football program that drew about 75 players this year, Humphrey said. Flag football continue to be offered, along with basketball, volleyball and soccer. In all, about 1,700 kids participate in the club’s athletic program this year, she said.

Over the years thousands of kids have played Boys & Girls Club football, including Alani Makihele and many of his friends and teammates. Makihele’s older brother, T.J., is a Boys & Girls Club veteran who plays football for Montana Tech, and Alani said he has received a number of offers to play college football next year, including four from Division I schools.

He credits much of his success to Boys & Girls Club football. It didn’t just teach him the game, he said. It taught him to love the game.

And while youth football isn’t a necessary precursor to high school football, Makihele said he isn’t sure if he would have tried out for football at West High if he hadn’t played youth football.

“Honestly, I don’t think so,” he said. “My love for football started as a kid, I learned the basics with everyone else on the team back then, (and) if I started in high school I’d be way behind. I don’t know if I would’ve cared about it like I do if I started that late.”