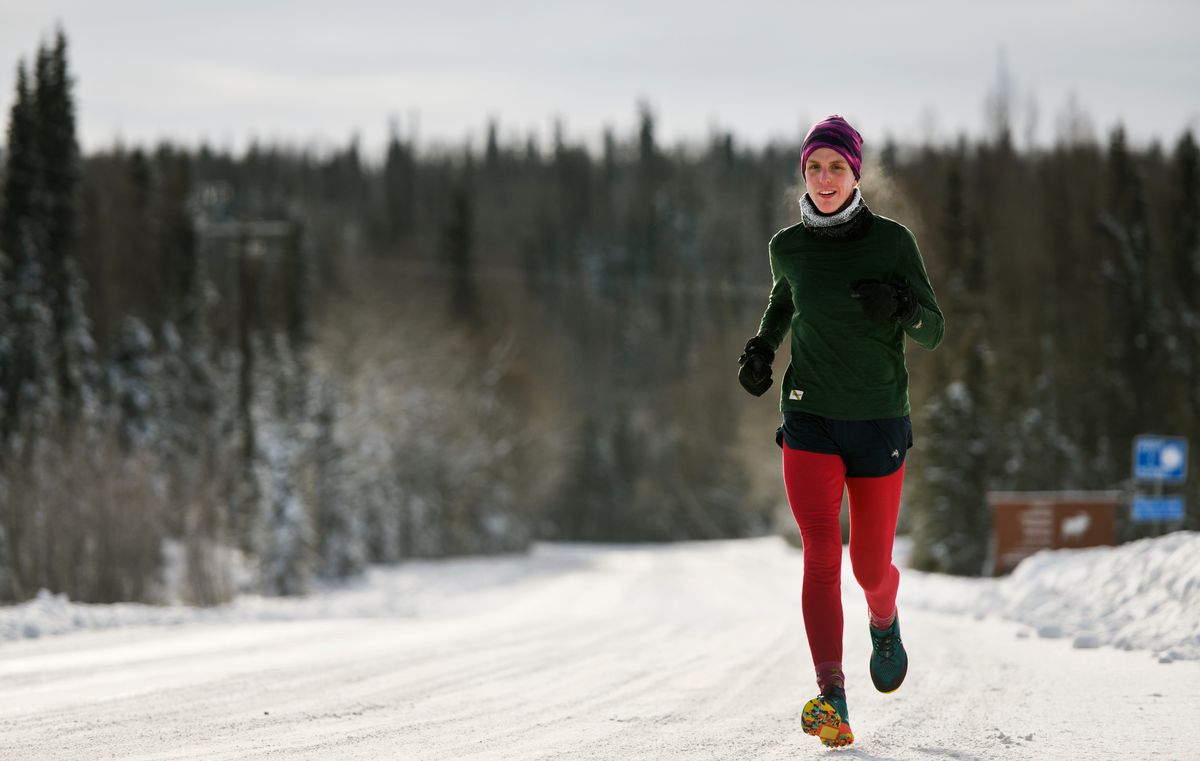 Marathon runner Megan Youngren trains on a Soldotna road on Feb. 14, 2020. Megan Youngren, 28, qualified in December for the U.S. Olympic Marathon Trials. Her entry in the Feb. 29 race in Atlanta is pending, but if it is approved, it’s believed she would become the first openly transgender athlete to compete in the U.S. marathon trials, according to a USA Track & Field spokeswoman. (Marc Lester / ADN)

Marathon runner Megan Youngren trains on a Soldotna road on Feb. 14, 2020. Megan Youngren, 28, qualified in December for the U.S. Olympic Marathon Trials. Her entry in the Feb. 29 race in Atlanta is pending, but if it is approved, it’s believed she would become the first openly transgender athlete to compete in the U.S. marathon trials, according to a USA Track & Field spokeswoman. (Marc Lester / ADN)

In a way, Megan Youngren of Soldotna is an accidental marathon runner.

She started running a few years ago to improve her health. She had gained weight after a nasty bout of shingles, and running helped her lose 70 pounds.

Her preference has always been long trail runs in the mountains and cross-country ski outings on the Kenai Peninsula, especially on Soldotna’s Tsalteshi Trails. When she heard about the Equinox Marathon held each year in Fairbanks, it sounded like the perfect race — a 26.2-mile combination of trail running and road running with a taxing 3,200 feet of elevation gain.

The course intrigued Youngren, and the most logical way to experience it was to enter the race.

“I’m a trail runner, so it was in my wheelhouse,” she said. “The whole me-doing-a-road-marathon was like an aside."

What started as an aside three years ago became headline news this year.

Youngren, 28, qualified in December for the U.S. Olympic Marathon Trials. Her entry in the Feb. 29 race in Atlanta is pending, but if it is approved, it’s believed she would become the first openly transgender athlete to compete in the U.S. marathon trials, according to a USA Track & Field spokeswoman.

Yet just as she is an accidental marathoner, Youngren is a bit of a reluctant trailblazer.

“Obviously this is going to be a thing for at least a little while that I can’t escape,” Youngren said about news coverage and online chatter about her potentially groundbreaking race. “You always hope it’ll be no big deal, that you can mind your business, work hard and compete, and then go home just like anybody would like to do. ...

"But I’m also the person who’s here. I’d rather not have the next person who comes along have to deal with this.”

And so Youngren has spoken openly about being a transgender athlete, about becoming internet fodder, and about some of the criticism that has come her way.

Some of the criticism has come from within the running community, from people who think Youngren wasn’t an Olympic trials-worthy runner until she made the transition from man to woman. While it’s true that she has reached new levels of running since her transition, it didn’t happen because she transitioned.

Youngren said she began transitioning in 2011. She became a serious runner in 2017, the same year she did her first Equinox. In between, she was a frequent trail runner and skier, but when she got shingles she curtailed almost all exercise because of the pain.

“I wasn’t in great shape then, and then I got a little more overweight and I fought my way back,” she said. “I lost 70 pounds.”

Youngren finished her first Equinox in 54th place in 4 hours, 48 minutes, 39 seconds. She had so much fun that she kept going for long, hilly runs and skis, and in 2018 she finished her second Equinox in ninth place in 3:53:39. She was nearly 40 minutes behind winner Christy Marvin, who set the women’s record that year in 3:15.

Soon after that, she set her sights on the Olympic trials qualifying mark of 2:45, knowing that times in the Equinox are much slower than those in more traditional marathons. Anchorage’s Aaron Fletcher, for instance, set the Equinox men’s record last year in 2:38, which is more than 20 minutes slower than the 2:17 he ran in 2018 to qualify for the men’s Olympic Marathon Trials.

Youngren was just getting started as a serious marathon runner, and with a goal in place, she spent most of 2019 chasing it.

In June she finished second among women in the Mayor’s Marathon in Anchorage in 3:06. In August she was the second-place woman at the Anchorage Runfest, where she ran a personal-best 2:52.33 amid howling winds. In December, she reached her goal of meeting the Olympic trials standard by running 2:43:52 at the California International Marathon in Sacramento.

After that, she went online and found a coach.

Also after that, some started looking at Youngren’s rapid improvements and asking questions.

“It’s sort of like if I were already fast (before the transition) this would be a lot easier,” Youngren said. "But since I started from nothing, even though I had a history of exercising ...

“This is all a nonstory as soon as you realize there are other people who are like, ‘Hey, I’m in my mid-20s and I’m not happy being overweight, and I would like to get fit and have fun doing it.' That’s a pretty common story."

What’s not so common is doing it as a transgender woman and winding up at the U.S. Olympic trials. There is no known roadmap for what Youngren is doing. She continues to do all of her training outdoors on trails and roads around Soldotna, where she has lived most of her life. She worked for several years at a Soldotna bakery, a physical job that helped develop her upper-body strength, she said.

In advance of the Olympic trials, Youngren got a therapeutic-use exemption for the drug she uses to block testosterone. She said she has medical records showing she has long been in compliance with international sports rules governing testosterone levels for women.

Her participation in the Olympic marathon trials would not displace any other runners — the field is unlimited, open to anyone who has met the 2:45 standard in a qualifying marathon.

“The implication there’s never gonna be another cisgender female winning a race is just crazy to me,” Youngren said. "I am not and probably never will be the fastest female road runner in Alaska. ...

“There are people who genuinely have a disagreement (and believe) trans women should not compete in sports. OK, but that’s not my problem. I’m complying with the rules. If the rules said I couldn’t, then I wouldn’t. I would just go back to doing what I was doing for years and go out and run for fun, because that’s what it’s for.”

“I find that one kind of hurtful ‘cause I’m out here training so hard I’m falling asleep in front of the TV with the dog,” Youngren said. “I’m tired all the time and I’m working as hard as I possibly can.”

Youngren said she doesn’t think she will be a marathon runner for life. She has no desire to take on the 50-state marathon challenge, although she said she probably will do one or two races a year so she can remember what it’s like to run hard on pavement. Ultramarathons have far more appeal, she said, and so do long trail runs in the mountains where there are no finish lines and the ultimate goal is to love what you’re doing.