This Anchorage runner’s training is unorthodox, but it’s sending him to Olympic marathon trials feeling fit and fast 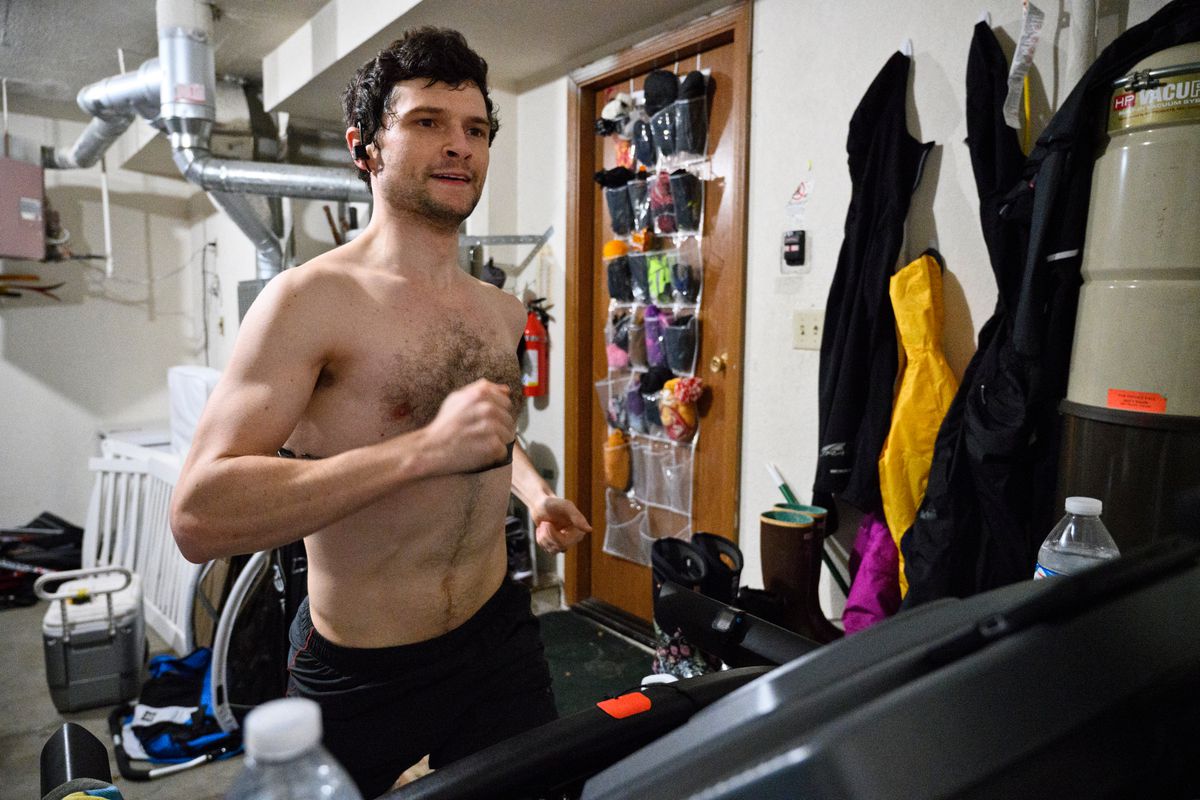 Aaron Fletcher trains on a treadmill in his garage in Anchorage as he prepares for Saturday's U.S. Olympic Marathon Trials in Atlanta. (Marc Lester / ADN)

Aaron Fletcher trains on a treadmill in his garage in Anchorage as he prepares for Saturday's U.S. Olympic Marathon Trials in Atlanta. (Marc Lester / ADN)

After living in Utah for several years, Aaron Fletcher moved back to Alaska in May to begin a job as a civil engineer and raise a growing family with his wife, Karen.

The big move happened shortly after Fletcher qualified for the U.S. Olympic marathon trials, meaning the heart of his training for the biggest race of his life would happen during a dark, cold, icy winter.

Once winter came, Fletcher seldom trained outdoors other than on his easy days, when maybe he and Karen would put on snowshoes or cross-country skis and put 2-year-old Rosie in a sled towed by Fletcher.

Otherwise he either ran circles on the 413-meter track oval at The Dome or spent hours on a treadmill in his garage, logging miles and watching Netflix. He fit everything around a full-time job, a house with a toddler and a wife who is due to give birth to their second child at the end of March. He ran early in the morning before work and in the evening after work. He trained without a coach, and with no running partners.

A less than ideal training plan?

Quite the opposite, Fletcher said.

On the day he headed to Atlanta for Saturday’s Olympic marathon trials, Fletcher said he is as ready as he’s ever been for a race. That’s noteworthy for a guy with an enviable resume that includes a stunning performance at last year’s Equinox Marathon in Fairbanks, where he broke the 35-year-old course record.

“Honestly, I don’t think it could’ve gone any better,” Fletcher, 28, said Tuesday before flying to Atlanta. “I had an incredible training block, my best one ever by far.”

No nagging injuries, no buildup of boredom. Just quality results from what turned out to be quality training.

“I’ve done lots of treadmill running. And maybe that’s something right there, that it’s softer than running on pavement,” said Fletcher, who began every weekend by spending 2.5 hours of his Saturday morning on his treadmill. “Skinny Raven has been giving me a new pair of shoes every month, which is the first time I’ve been able to have training shoes that aren’t worn out.

"... A lot of elite training is simulating race situations. You put yourself in a situation where you are kind of tired and having to still run fast and you see how you react and if you can keep going at your goal pace. And I have done that well.”

In an Instagram post a week before Saturday’s race, Fletcher said he had 12 straight weeks with 100 to 110 miles of volume and “workouts faster than I even dreamed possible a year ago.”

That’s saying something, because Fletcher was already fast a year ago. And two years ago. And for several years before that.

A 2009 South High graduate, Fletcher was a top high school runner in Alaska but wound up walking on at Brigham Young University after failing to attract any Division I scholarship offers. He became a team captain and an NCAA All-American in the 3,000-meter steeplechase.

Fletcher turned to longer distances after college, and in 2017 he entered four races ranging from a 13.1-mile half marathon to a 26.8-mile trail run and set course records in each of them. The pinnacle that year came at Utah’s St. George Marathon, where he registered a personal-best time of 2 hours, 14 minutes, 44 seconds.

The men’s qualifying standard for the U.S. Olympic trials is 2:19, but Fletcher’s time at the St. George race didn’t qualify him for the trials because the Utah course has too much elevation loss. In November 2018, despite a knee injury that limited his training, Fletcher got his qualifying time — 2:17:23 at the Indianapolis Marathon, where he won the race and set an age-group record.

After Indianapolis, Fletcher all but stopped running for several months because of the knee injury — a bone bruise and soft-tissue damage suffered when he tripped and fell in a training run.

In May the Fletchers moved to Anchorage and Fletcher began a job at Dowl Engineering. By last summer he was able to run again, fueled by the knowledge that his PR in Indianapolis came despite an injury that led to sub-maximal training.

Fletcher’s first race after Indianapolis was in a community race at a high school cross-country meet at Russian Jack last year. Then came the record-crushing effort at September’s Equinox.

“I was a little surprised to come back that strong, but not really,” he said after the Equinox. “I bought a stationary bike and just went for it. I put in a lot of time on that. I worked hard to try and stay in at least a modicum of fitness.”

Then and now, all of that work was done on his own.

“Since college I’ve been mostly coaching myself, with some advice from guys that I know,” Fletcher said. “I’m doing lots of research online and I’m finally getting to the point where I can confidently do it myself.”

Same goes for his training runs, which he usually does by himself.

“There’s a lot of good runners up here,” he said, “but there’s not many at my level, so I’m kind of going solo most of the time, especially when I’m getting into the fast road work.

“I do work out with guys on easy days when I can. But I run at 6 in the morning, so there’s not a lot of people wanting to run then.”

Fletcher said the forecast for race day in Atlanta is 40 degrees, which would suit him fine. He prepared for the possibility of higher temperatures by doing some treadmill runs in his heated garage with his shirt on and the fan off.

After he won the Equinox, Fletcher said he usually doesn’t start a race if he doesn’t intend to win or set a course record. The top three finishers in Atlanta will make the U.S. team for the Tokyo Olympics, and Fletcher is one of 260 runners who qualified for the race. About 100 have faster PRs than Fletcher, including race favorite Galen Rupp (2:06:07), so Fletcher’s expectations for the trials — which he calls "the most competitive race in the United States'’ — are a bit different than usual.

Even so, Fletcher hopes to surprise some people.

“My main goal is to run to my ability,” he said. “I think with how well this training block has gone … I’m primed for a great breakout performance, quite honestly. I just have to make sure I run to that capacity, and run my own race and ignore the noise that comes with a big event like this.”