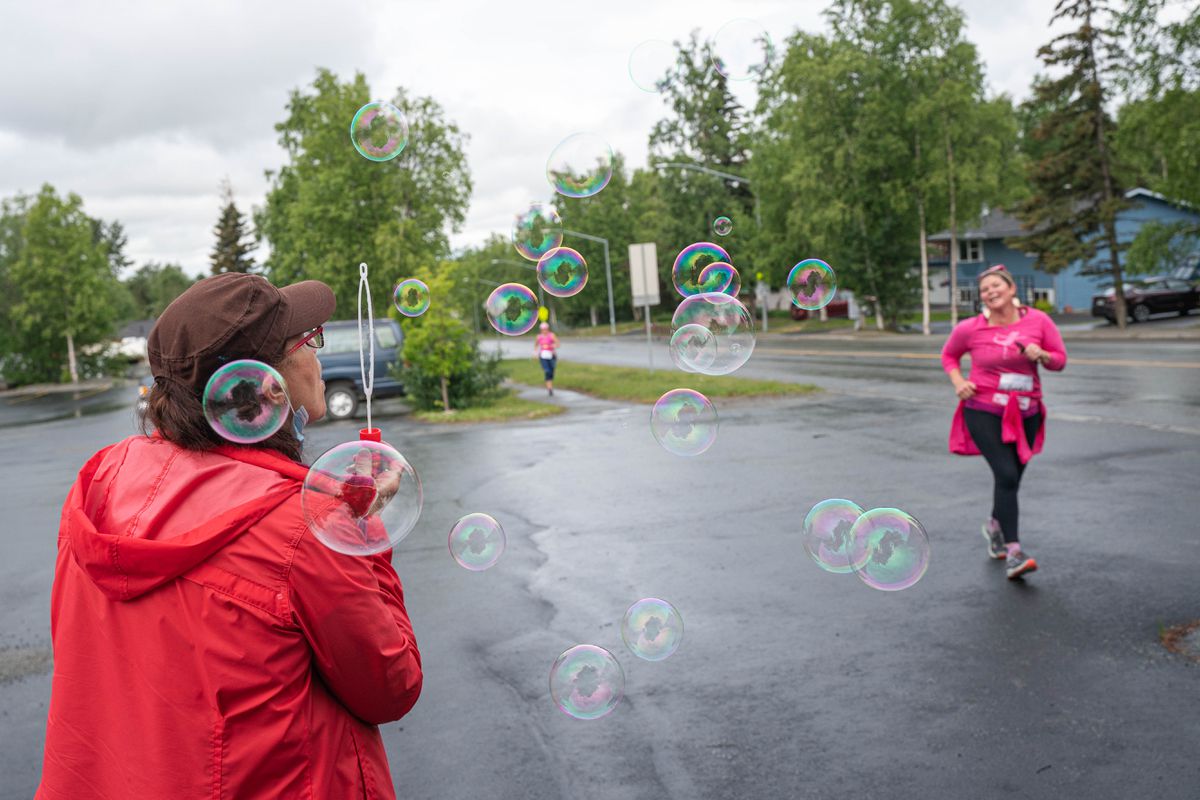 Before leading a parking lot full of women and girls through a brief yoga session to get them ready for a 5-mile run Saturday in Eagle River, Mary McCormick told the group the morning was about making the best out of things.

The pandemic has turned the annual Alaska Run for Women, a popular fundraiser for breast cancer charities, into a virtual event. Instead of thousands of pink-clad participants filling Anchorage streets and trails on a single morning, this year’s participants can do the run whenever and wherever they want during an eight-day span that ends next Saturday.

So far nearly 3,000 people have signed up for the virtual run, including the 40 or so who gathered in front of McCormick’s yoga studio at the Parkgate Professional Building for a mini-Run for Women, minus the drive to Anchorage.

“We are going to create a sea of pink in Eagle River, and how cool is that?” McCormick told the group.

Participants left a moment or two later, creating not so much a sea as a rivulet of pink as they trickled onto the street in pairs and small groups rather than departing en masse.

There was no countdown, no blast from a starter’s pistol, no race clock ticking off the minutes and seconds. But there were plenty of other things that made it feel like race day.

Participants wore race bibs printed out from the Run for Women website and many clutched maps of the 5-mile course, a challenging, hilly route that twisted and turned through neighborhoods.

“I had to stop — I couldn’t read the map without my readers on,” Renae Werner, 49, said with a laugh.

A water station was set up midway through the race at King’s Way Church, where a couple of people blew bubbles as runners and walkers passed through. At the start/finish line, cups of cut-up fruit were set up on a table.

McCormick — a 30-year Eagle River resident who calls herself “one of those people who can help people connect” — spearheaded the event.

“We want to recreate the Anchorage run,” she said. “It’s such a great cause, and we’re giving people an opportunity to have a 5-mile route. We want to create that positive vibe.”

Janet Huff and her husband, Jerry, designed the course, using many of the residential streets they often run and walk on.

Huff competes in a variety of races — she and Jerry plan to do this summer’s virtual Eagle River Triathlon — but the Run for Women is one of her favorites.

“I love (that) race. It’s so inspirational and everyone’s so chill and laid-back. I’ve only missed a few,” she said, and then nodded toward the crowd in the parking lot. “But look at this turnout.”

Demetree-Trombley, 53, ran the Run for Women about a dozen times before she got her diagnosis.

“It’s really surreal,” she said of the transition from supporter of the cause to survivor. “I always said I wanted a pink hat, but not like this.”

A typical Run for Women draws thousands of participants, including hundreds of survivors. Seeing all of those pink hats “makes you realize you’re not alone,” she said.

The first finishers were 46-year-old Angie Meahan and 14-year-old Emily Moore, who reached the parking lot together with a time of about 42 minutes, 30 seconds.

Meahan said Moore pretty much set the pace, and she kept waiting for the teen to break away at some point. But Meahan had a course map and Moore didn’t.

“I didn’t know where I was going at all,” Moore said.

On the back of her T-shirt was another Run for Women tradition — a sign honoring loved ones who have or had breast cancer. Written on Moore’s sign were the names of two women — great-grandmother “Great Moo” and grandmother “Me-Me,” both of them survivors.

The family has a high genetic risk for the disease, said mom Cary Moore, and it has a tremendous symbol of hope in Great Moo. She had a mastectomy 40 or 50 years ago, Moore said, and is 101 years old.