At muddy Mirror Lake, mountain bikers get a rare chance to race 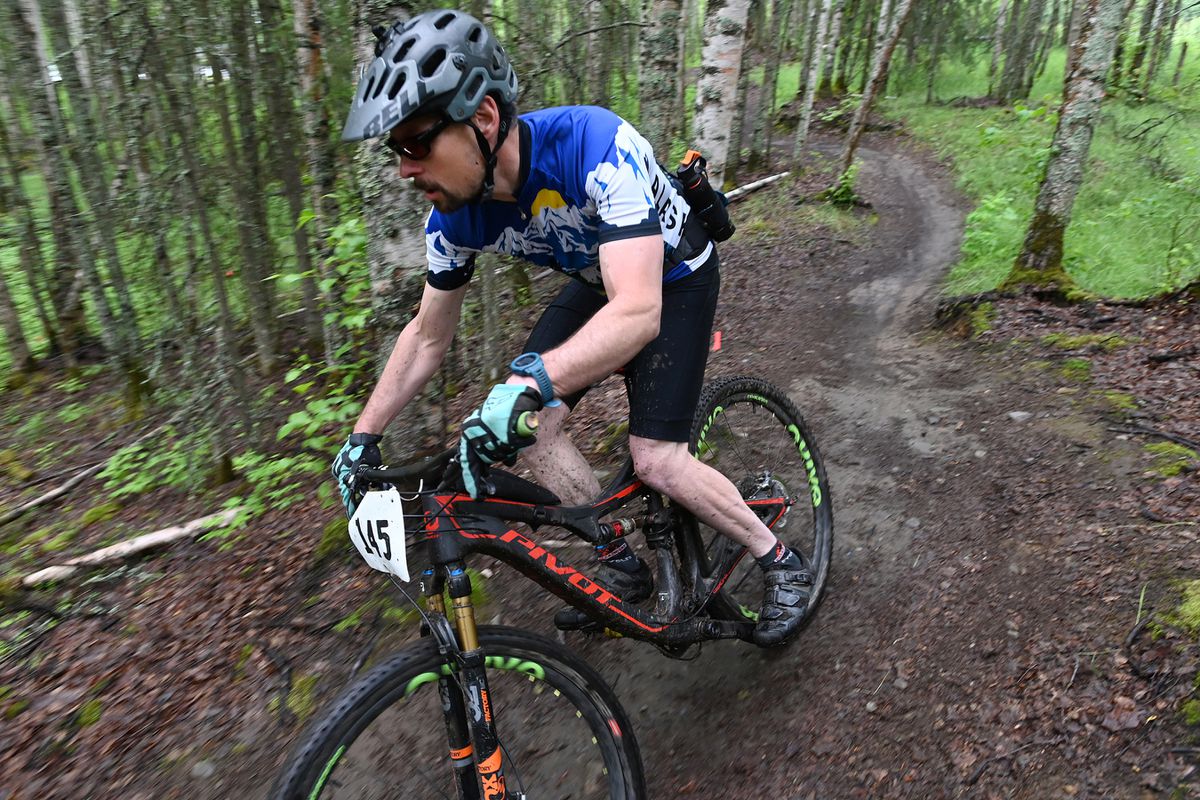 The Midsummer Masher mountain bike race at Mirror Lake scored high marks Sunday for following the rules— everyone volunteering or watching wore masks, and racers left in 30-second intervals to avoid crowding on the single-track trails.

Bryan Hudson scored high marks for showing that trash-talk can happen even with social-distancing.

“Don’t make me pass you,” he told fellow racer Nick Straka at the start line, where Straka stood astride his bike several feet ahead of Hudson as he waited for the countdown that would send him on his way, half a minute ahead of Hudson.

“Don’t make me paranoid,” Straka replied, though he had nothing to fear.

Both men made quick trips around a muddy, twisting four-mile course, and although Straka passed a couple of riders, no one passed him. He finished second to winner James Howery in the only Chugach Mountain Bike Riders race scheduled for this summer.

The crowd of racers was small but appreciative. The Arctic Bicycle Club has canceled its mountain bike summer series because of the COVID-19 pandemic, leaving mountain bikers with scant racing opportunities.

“Thanks for putting this on,” rider Tol Fishburn told a race official at the start line.

Fishburn, 62, is a longtime cyclist who has stayed race-sharp during the pandemic with Zwift, an indoor cycling app that simulates criteriums, road races and more.

He hadn’t raced in a real race since last fall’s ABC cyclocross race series and was happy to be back on the trails with real racers and a real ticking clock.

“It’s fantastic,” he said. “This course is really tight and twisting. … It has a lot of really tight turns, and I kind of like that.”

A day earlier, he and his sister, Leah Fishburn-Rios, previewed the course and spotted some particularly perilous turns — a scouting trip that helped Fishburn-Rios turn in Sunday’s second-fastest time by a woman.

“I did a major endo yesterday,” she said. “It was at the bottom of a hill where there’s a sharp turn and a tree right there.” While previewing the course, she was going too fast and got tossed from her bike when she careened off the trail to avoid smashing into the tree.

Lesson learned. On race day, she said, “I remembered to slow down.”

Pamela Schamber recorded a time of 30:51 to top the women, with Fishburn-Rios second in 31:28 and Jessica Tasselli third in 33:29.

Howery was among a handful of Sunday’s racers who also competed in the June 13 Foxy Beaver Gravel Grinder, a 36-mile gravel race in Knik. He said there’s an enduro race later this summer on the Hillside — every racer must agree to put in a day of trail work on the Hillside single-track system, he said — but races are few and far between for mountain bikers.

And yet people are finding ways to compete, even if it’s a road race instead of a mountain-bike race. Straka spent Saturday racing the Arctic Bike Club’s Potter Rabbit Roubaix, a 16-mile road race in South Anchorage with 3,400 feet of elevation gain.

Third-place went to Max Beiergrohslein, whose time of 23:02 came in crazy circumstances.

Every racer was already on the course — and Howery was about one minute from finishing — by the time Beiergrohslein arrived at Mirror Lake. He had spent the previous two days on the Kenai Peninsula following the Kenai 250 endurance bike race from Hope to Seward and back.

Official racers traveled 257 miles in the three-day, self-supported, bike-packing race. Beiergrohslein and his dad pedaled about 91 miles — “We called it the Gentleman’s 250,” Beiergrohslein said — and on Sunday morning they drove from Hope to Mirror Lake.

“I was sleeping till Peters Creek,” Beiergrohslein said. “I got out of the car and started immediately.”