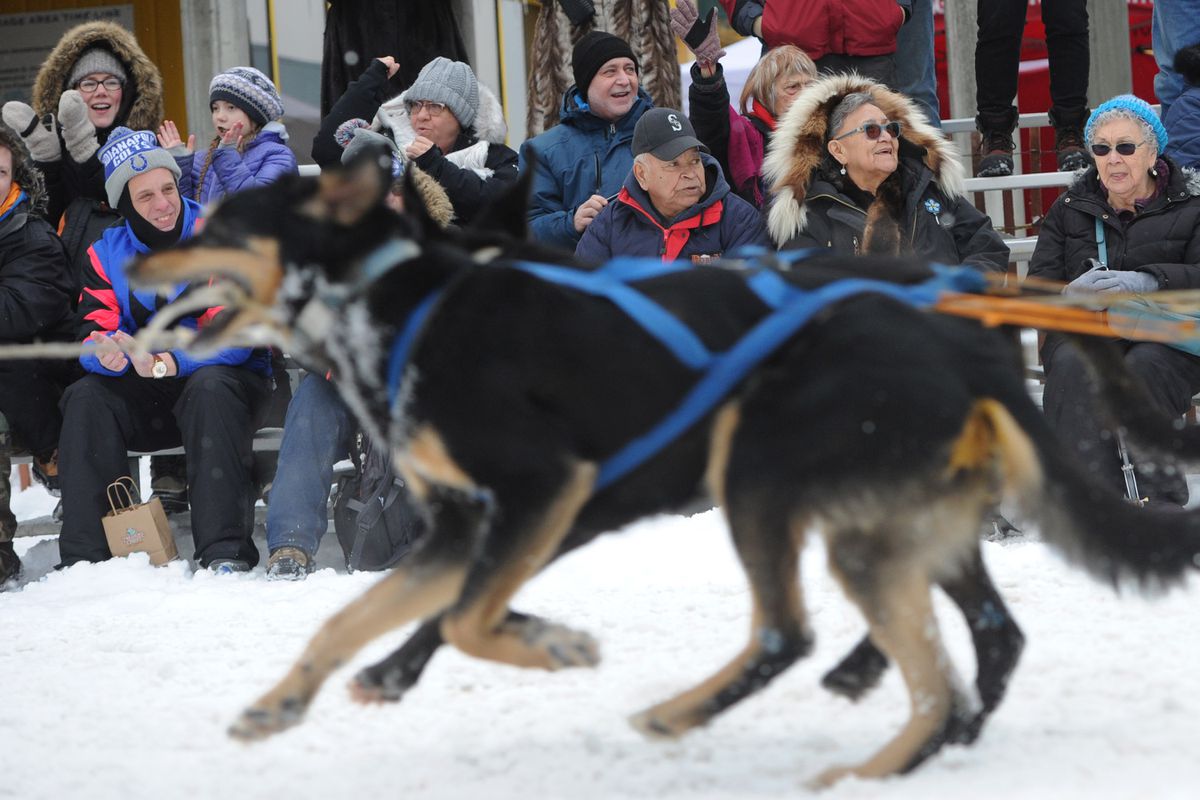 The Fur Rondy festival itself is still scheduled to happen from Feb. 22 to March 6, but in a modified form. All of the crowd-magnet events, like the popular Running of the Reindeer, will also be canceled, Fur Rondy marketing chairperson Ruth Williams said.

Scheduled for the last weekend of February, the three-day Open World Championship race attracts mushers from across Alaska and beyond — as well as thousands of spectators who gather at the downtown start and finish area as well as at viewing points across the city.

The announcement to cancel the race came from Greater Anchorage, Inc. and the Alaskan Sled Dog and Racing Association.

“Both organizations place the greatest priority on community health and recognize that the requirements for the race itself and the large crowds of spectators that gather downtown for the start and finish of this amazing race is too risky during the Covid 19 pandemic,” organizers said in a joint statement. “We hope to welcome competitors and spectators from around the world again in 2022 for another showdown of the fastest dogs in the world.”

The statement said ASDRA is planning an alternative event, but ASDRA trail manager John Rasmussen said any racing this winter will happen only if state and local mandates allow such competitions, particularly when it comes to limits on gatherings.

“It depends a lot on what the city says we can do and can’t do,” he said.

ASDRA’s small clubhouse at Tozier Track on Tudor Road often fills up with race officials and volunteers during races, Rasmussen noted, which is problematic given social distancing recommendations.

“We can’t put too many people too close together,” he said.

The Open World Championship, one of Alaska’s oldest sporting events, dates back to 1946. Teams of sprint dogs race 26 miles through Anchorage on three consecutive days, and cheering crowds are a big part of the event.

The race ran without interruption from 1946-85, but this is the ninth cancellation in the last 36 races — and the first for something other than poor trail conditions. Lack of snow and in one case strong winds cancelled the race 1986, 1996 and on five occasions since 2001, most recently in 2016, when it was modified to heats of five mile.

Despite what appears to be ample snow in Anchorage, Rasmussen said the ASDRA trails aren’t open yet because there isn’t adequate snow coverage yet. Parts of the trail system require significant amounts of snow, including a few tunnels that teams mush through.

While the pandemic is threatening the 2020-21 season, in some winters there isn’t been enough snow for ASDRA to hold all of its races. The sprint racing season at Tozier Track typically opens in January, but in recent years a number of races leading up to the Fur Rondy championship have been canceled due to a scarcity of snow.

“This will probably be the year we get lots of snow,” Rasmussen said.