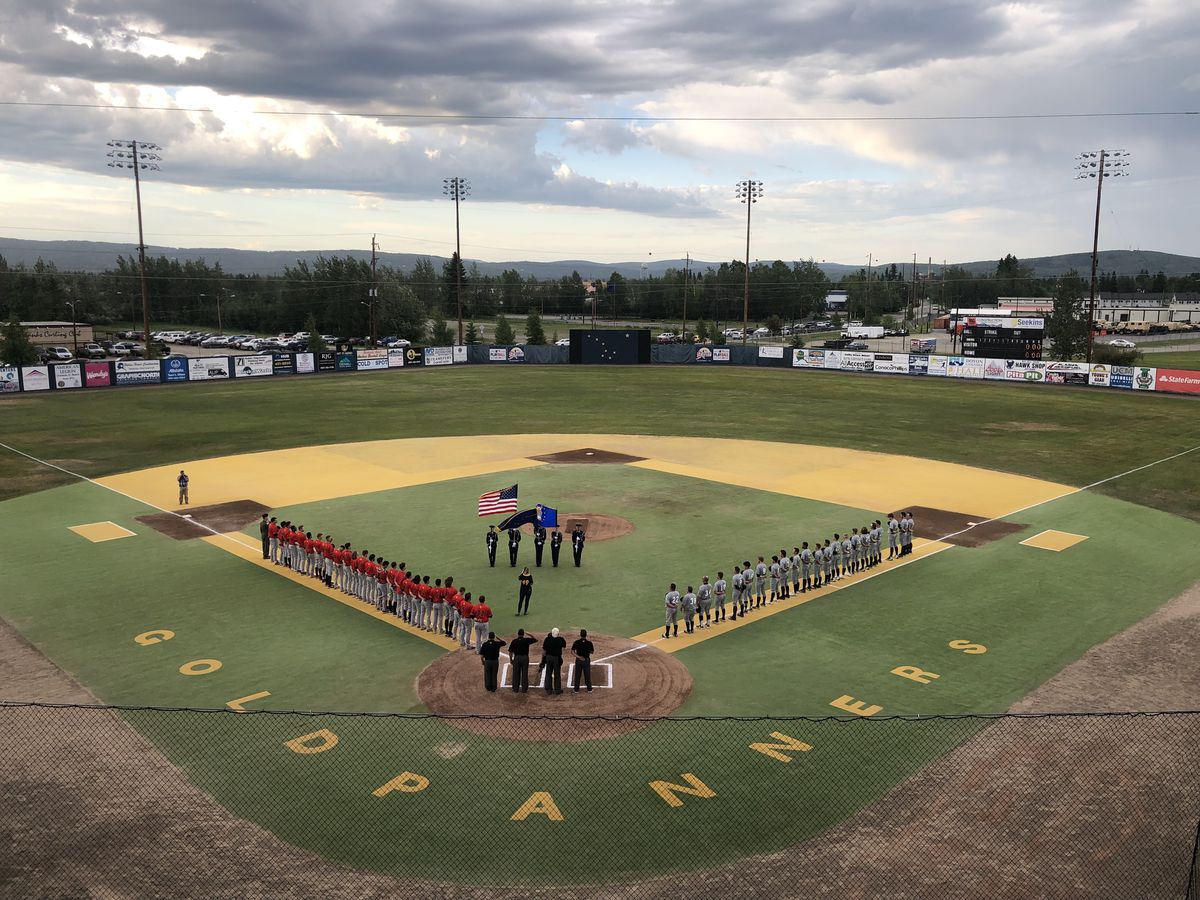 (Fourth in a series about Alaska Baseball League ballparks)

Don’t show up at Growden Memorial Park expecting to sing about peanuts and Cracker Jack.

Come the seventh-inning stretch, Alaska Goldpanners fans get on their feet and sing, hum and sometimes kazoo along to the strains of the Beat Farmers’ one-hit-wonder, “Happy Boy.” Like the song, the farthest-north baseball stadium in the U.S. is a little dated, offbeat and deeply quirky.

The park, in operation for 57 years, is the oldest of the Alaska college summer-league parks. It has housed the Goldpanners since it was built and has also been the home of former Alaska Baseball League teams the North Pole Nicks and the Athletes in Action. The Goldpanners, charter members of the ABL, have been out of the league since the 2015 season; a potential return has been discussed but hasn’t yet come to fruition.

Growden Park usually sees a few hundred fans for a regular-season game, but the crowd swells to its capacity of roughly 3,500 and beyond for the park’s signature summer event: the Midnight Sun Game.

A June 21 fixture in Fairbanks since 1906 (the initial edition was played to settle a wager between two local bars), the first pitch in the game is thrown at 10:30 p.m. and the game is played in its entirety without the aid of artificial light.

It’s a feat only possible at or above Fairbanks’ latitude, as the city gets nearly 22 hours of sunlight on the summer solstice. At the half-inning break closest to midnight, the crowd rises to its feet to sing “Alaska’s Flag.” Solstice magic has historically favored the Goldpanners; although they lost this year’s edition of the game in extra innings, they’ve won more than three times as many Midnight Sun Games as they’ve lost.

Like its theme song and its signature event, Growden’s infrastructure is aging — sometimes gracefully, sometimes less so.

It’s the only park in Alaska with a distinctive, almost garish, turf infield. The mostly-functional scoreboard in right center field is controlled through an archaic, proprietary switchboard in the press box.

That press box, according to the Goldpanners, is the tallest in Alaska, and it sways disconcertingly when it’s windy, or when someone is ascending the staircase up from ground level. The stadium’s lights, stricken from use during the Midnight Sun Game, were installed in 1964.

But it’s the bleachers at the field that have the most cachet for baseball trivia freaks: The grandstand under the press box was salvaged from Sicks’ Stadium in Seattle, the home of the ill-fated Major League Baseball franchise the Seattle Pilots. The Pilots folded after a single season in 1969, but their seats live on in Fairbanks.

On regular game nights, if the air isn’t choked with wildfire smoke, Growden Park is an affordable night out for Interior residents and visitors looking to catch a glimpse of players on the rise before they make it to playing professional ball. Tickets for adults run $7 apiece.

According to Winfield, he once hit one of Growden’s longest home runs — a moon shot that streaked all the way over the left field fence and across First Avenue, striking the Fairbanks Curling Club on the fly. According to other sources present for the home run, Winfield is accurate in saying he hit the curling club — but they say the ball bounced in the parking lot first.

(Next: Lee Jordan Field in Chugiak)

Named for: James W. Growden, a standout Fairbanks athlete who died with his two sons in Valdez in the tsunami generated by the Good Friday earthquake in 1964. Growden had been active in encouraging youth athletics in Fairbanks; a longstanding college scholarship for standout athletes at Lathrop High School in Fairbanks is also named in his honor.