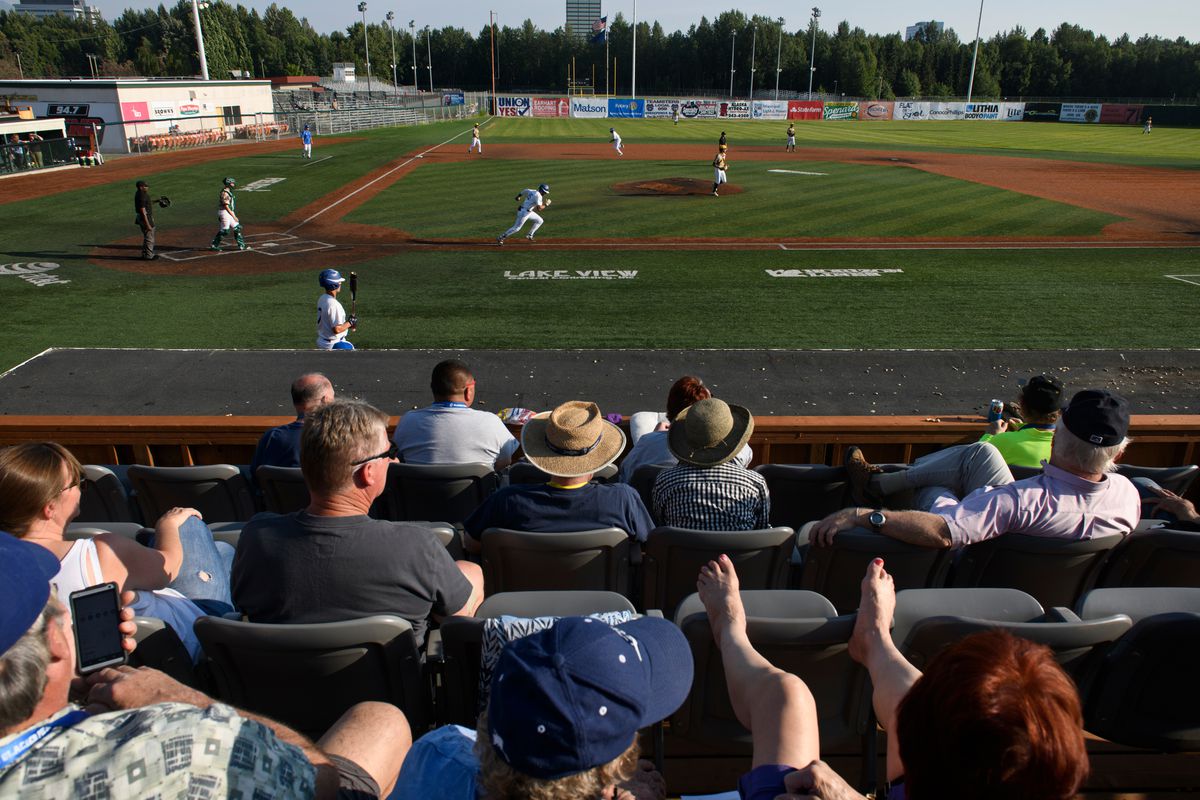 One of Anchorage’s most endearing and enduring summer traditions returns this weekend with the opening games of the Alaska Baseball League.

Not a baseball fan? Doesn’t matter. These games offer unique and affordable outdoor fun for all ages and are as much about casual socializing during the long-lit Alaska summer evenings as they are about sporting contest. And in the COVID-19-era, with many gravitating toward less-crowded, open-air, cost-conscious events, the ABL is your ticket.

Here’s what you need to know to understand and enjoy one of the city’s simplest summer pleasures.

The Alaska Baseball League took a pandemic hiatus last year, so athletes, ball clubs and fans alike are excited for its return.

The league and summer baseball in general celebrate a decades-long history in Alaska. The Fairbanks Goldpanners debuted here in 1960, and although they no longer are a member of the league they still play games against some of their old rivals.

The Anchorage Glacier Pilots debuted in 1969 and are part of a league that includes four other teams: the Anchorage Bucs, the Mat-Su Miners, the Kenai Peninsula Oilers and the Chugiak Chinooks.

The athletes are talented college baseball players from across the country who live with local host families. The Alaska-based teams follow a busy game schedule that models the competitive clip of the big leagues.

The teams most frequently play against one another, and because Anchorage has two teams, there are games at Anchorage’s Mulcahy Stadium nearly every day starting Saturday and continuing through late July, when playoffs begin.

While many in attendance are longtime die-hard ABL fans, decked out in Pilots and Bucs gear and colors, plenty embrace these games as more social events. Kids dart about underneath and behind the bleachers, hunting for foul balls. Families and friends cluster in the stands and chat over pints of beer and paper cups full of popcorn.

Local crooners are featured for the national anthem, and others perform talent acts between innings, giving the game a small-town ambiance. Often games have theme nights or special sponsors that include ticket discounts or freebies. Raffle tickets are always for sale, with giveaways for gift cards called out over the loudspeakers during game breaks. Also available for purchase: Bucs and Pilots gear like T-shirts, hoodies and hats.

The teams’ announcers are full of local pride and merriment. The shattering-glass sound effect they play each time a foul ball sails toward the parking lot is a good reminder to think carefully about where to park the car.

Nothing beats a bluebird day when parts of Mulcahy are backdropped by the Chugach Mountains. The fence surrounding the diamond and outfield is lined with sponsors’ ads, heavy on representation from labor and trades. The thwack of the ball against a wooden bat makes a lovely summer soundtrack. Most nights, the stadium lights are unnecessary in the Land of the Midnight Sun.

While those sunny evenings promise an incomparable dose of vitamin D, don’t count out the grayer, cooler evenings. Attending in less-than-delightful weather guarantees sparser attendance and makes for a more baseball-focused experience. Mulcahy is large enough that even the busiest games have plenty of space and seating. The exception is Fourth of July, when seats are often filled to capacity.

Coming to games armed with some basic comforts will make for a more pleasurable viewing experience, especially if you plan to stay for the duration. The rustic bleacher seating is improved if you bring your own cushion, like an old blanket or folded towel. When the sun’s out, sunscreen, sunglasses and a brimmed hat are a boon.

Many people bring a baseball glove, hoping to snag the occasional foul balls that hurtle toward the fans or soar over the concession areas and parking lots — but good luck outrunning the eager herd of children who unfailingly tear about the go-to foul ball landing zones. Speaking of flying objects, don’t forget bug repellent, as mosquitoes are often in play.

A water bottle is useful and can be refilled at the stadium’s drinking fountains. Also, beer koozies will protect beverages in sunny weather. If there are any doubts about the weather turning, pack a poncho or rain coat; most of Mulcahy’s seats are exposed. An umbrella can help too, but if using one, be mindful not to block others’ views.

Teams produce their own standard program for the season, so if you plan to go more than once, buy it and hang on to it. The programs are helpful for knowing the players’ names and positions, where they’re from and where they go to college.

The dinner-hour timing of most Mulcahy games means fans may arrive with an appetite. The stadium is surrounded by concession stands that offer basic ballpark food. It’s tasty and traditional in its throwback simplicity and even more attractive for its modest pricing. Think hot dogs, hamburgers, even Frito pies -- a homey dish with corn chips, chili and cheese. Popcorn is a cheap and easy option, and a chewy salted pretzel with hot cheese dip is a crowd favorite.

Basic alcoholic beverages are available for purchase, including wine, beer, ciders and seltzers. Drinks can be consumed throughout the ballpark and pricing is comparable to what one would pay at a bar. Overall, concession pricing at the park is reasonable; fans can get food and a beverage for well below $20.

Most Mulcahy games begin between 6 and 7 p.m., though weekends sometimes feature afternoon contests. The timing makes for a perfect after-work activity or a weekend date night or outing with friends. Timing at these games is truly fluid. People come and go. Many watch several innings then call it a night while others catch the entire game, which can stretch beyond three hours.

Alaska Baseball League games are among the cheapest tickets in town: a single-game general admission ticket to Mulcahy’s open bleacher and beer garden seating is just $5. Splurge and pay $7 to sit in the covered box seats. Children 6 and under are admitted free, and tickets for kids ages 7-12 are half-price. Active and retired military members and their families get in free, and seniors get a 50% discount. (Special prices apply for the Fourth of July.)

Katie Pesznecker is an Anchorage writer. She's a former reporter for the Anchorage Daily News.