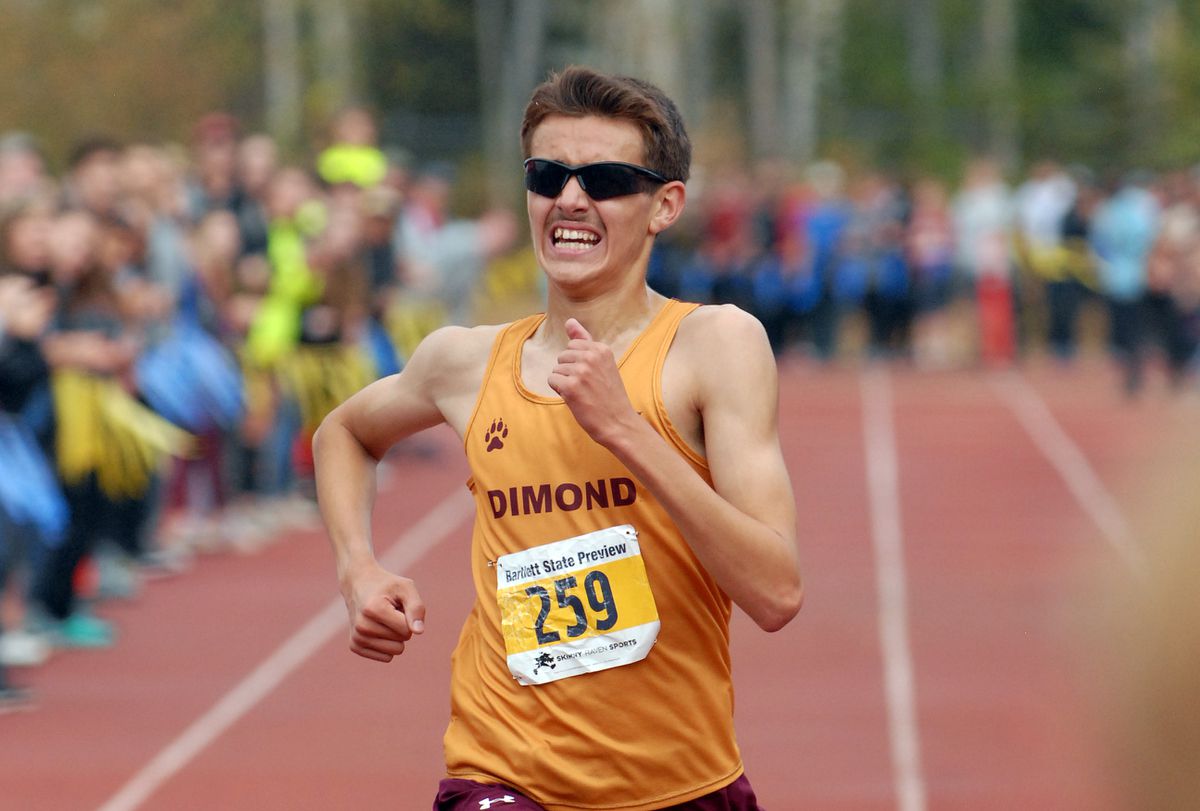 When the smoke cleared, it was all Sonny.

Nobody was more surprised than Prosser, who carved more than 30 seconds off his personal best on a cool, cloudy day.

“That was not the plan at all,” said Prosser, a senior who was last year’s Division I state runner-up to Chugiak’s Daniel Bausch. “I just went for it.”

After just a kilometer, Prosser began to pull away from his talented pursuers, Anchorage Christian’s Tristian Merchant — the 2018 Division II state champion — and Chugiak’s Hyrum Nelson. Nelson said the move was both unexpected and unmatchable — and agreed with Prosser’s assessment.

“He just went for it,” Nelson said.

Prosser never tired, finishing 22 seconds ahead of Merchant — whose time of 15:29 equaled Bausch’s winning time at the 2018 state meet and tied for the third-fastest time ever run on the state course. Nelson was third in 15:50, also good enough to make the list of 20 fastest times in course history that’s posted near the finish line at Bartlett.

In contrast to Friday, when outdoor after-school activities were canceled, Saturday featured clear air that posed no difficulty for runners.

While the boys varsity race was a runaway, the winner of Saturday’s girls race used a conservative strategy to claim victory.

Eagle River’s Emily Walsh said her goal was to run “even splits” throughout the race rather than going out fast and trying to hold on. The plan worked, as the junior won in 18:31, one second off her personal best on the course — which also happens to be the fifth-fastest in history.

“It’s good to learn to pace yourself,” said Walsh, who outran Chugiak’s Adrianna Proffitt by 14 seconds.

South freshman Robyn Miller was third in 18:59. The Wolverines’ Ava Earl — who finished one spot behind Walsh at last year’s Division I state meet — skipped the meet to attend a music event Outside. In addition to being one of the state’s best cross-country runners, Earl is a well-known singer-songwriter from Girdwood.

Walsh said the course — which is identical to the state meet layout — was in great shape Saturday after light overnight rains knocked down the dust and smoke but didn’t leave a mess behind.

CLARIFICATION: Times in this story have been updated from a previous version, which used unofficial times.