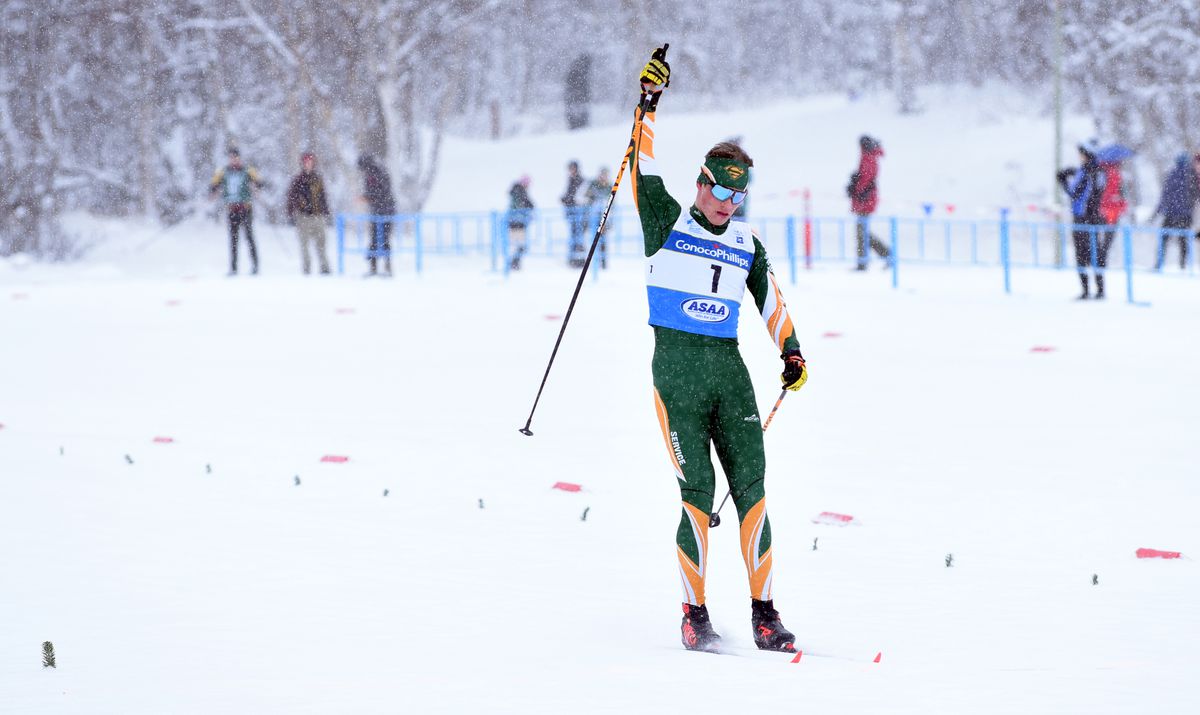 Kendall Kramer ran away with a state Skimeister title Friday while Alexander Maurer climbed off with his.

West Valley’s Kramer won the girls 7.5-kilometer classic technique race by more than 50 seconds to sweep both individual races and claim her third straight Skimeister title, awarded to the skier with the best combined time from Thursday’s freestyle race and Friday’s classic race.

Kramer, a senior, won the Skimeister title by more than a minute over Service’s Tatum Witter, who placed second in both races. Chugiak’s Adrianna Proffitt finished third in the Skimeister standings after placing third in Thursday’s race and fourth in Friday’s race.

Kramer took control of Friday’s mass-start race immediately, putting a gap between herself and the chase pack within the first kilometer.

Kramer said she never looks back and relies on her ears to keep an eye on her competitors.

The races were held in snowy conditions and temperatures just below freezing that made waxing a challenge. The Fairbanks-raised Kramer credited her coaches with adapting to the tricky conditions.

“Usually when it’s snowing like this in Fairbanks it’s really slow snow and so this was interesting,” she said. “Our coaches never have to wax for this so I’m really glad they pulled it through and gave us some good skis.”

Kramer is the third girl in 40 years to win three or more Skimeister awards, and she’s the second from West Valley. Hannah Boyer won three straight for the Wolf Pack from 2010-12, and Tara Hamilton won four straight for Service from 1998-2001. Hamilton’s reign came when her biggest rival was East’s Kikkan Randall, who skied to an Olympic gold medal in 2018.

Kramer said she’s proud of being crowned the best high school skier in Alaska, where the field includes some of the country’s top young racers. Five Alaskans, including Kramer, are members of the U.S. team that will compete in the upcoming World Junior Championships in Germany.

Maurer, a Service High junior, had a 14.8 second lead over West Valley’s Eric Difolco and more than 30 seconds over Chugiak’s Michael Earnhart after Thursday’s race. Midway through Friday’s competition it became apparent the Skimeister crown was his to lose as both Difolco and Earnhart slipped off the lead pace.

“Around the start of the last 5K I started going a little harder just to make space between me and the other skiers,” Maurer said.

By the big climb on the Lekisch Loop, only Service’s Joel Power and Dimond’s Peter Hinds were hanging with Maurer. By the top of the hill, Maurer was alone.

“I started pushing way harder on Lekisch and that’s where I gapped them a little bit,” said Maurer, who placed fifth in the Skimeister standings last year.

Winning one of the most coveted titles in Alaska cross-country skiing was a thrill, he said — especially with state back at Kincaid for the first time since 2016.

“It’s pretty awesome, it’s been a dream of mine for a couple years now and it’s definitely a cool feeling to do that on my home turf,” he said.

The Service boys have claimed four of the last five Skimeister titles. Gus Schumacher won the crown in 2018 and 2017 and Canyon Tobin won it in 2016.

In the girls race, the Cougars landed five skiers in the top 10. Along with Witter and Tobin, Marit Flora placed seventh, Neena Brubacker was eighth and Meredith Schwartz was the top freshman in 10th place.

Service’s big day put the Cougars in position to sweep the team titles Saturday, when the meet wraps up with relay races. The Service boys and girls both lead West Valley by more than three minutes.

The list of Skimeisters was updated to correct what school Logan Hanneman skied for in 2011.