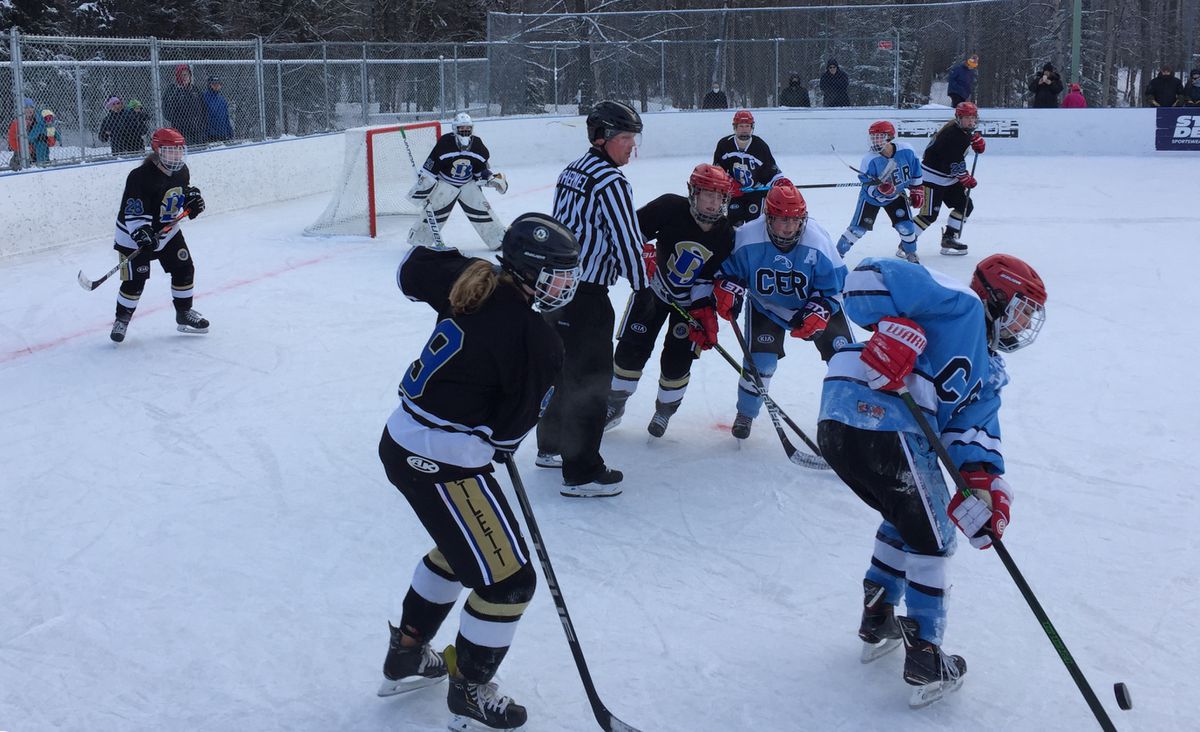 A referee is caught in the action Saturday as a Chugiak-Eagle River player tries to control the puck during South-Bartlett's 1-0 overtime win in the girls high school hockey championship game. (Casey Brogan / ADN)

A referee is caught in the action Saturday as a Chugiak-Eagle River player tries to control the puck during South-Bartlett's 1-0 overtime win in the girls high school hockey championship game. (Casey Brogan / ADN)

Anchorage’s girls high school hockey teams had to contend with a pandemic, Mother Nature and Old Man Winter to determine a champion this week. COVID-19 forced them to play all their games outdoors, and the contests were held whether the wind howled or the mercury plummeted.

And in the end, a resilient South-Bartlett squad once again stood atop all comers.

Freshman Haylie Anzelini of Bartlett made the first goal of her high school career one to remember and sophomore goaltender Brielle Akagi of South turned in another flawless performance as their team made it three consecutive seasons of supremacy by beating Chugiak-Eagle River 1-0 in overtime to win the city championship Saturday at the Bonnie Cusack Outdoor Ice Rinks.

“It was an amazing game,” said first-year South-Bartlett coach Bryce Akagi after the game, which was played with temperatures in the teens. “One-goal game settled in overtime? You can’t ask for a better ending. It shows the competitiveness of the league.”

Both teams opened the first period conservatively, but Chugiak-Eagle River stepped up the pressure late in the period and ended up with an 8-4 advantage in shots. In the second period, the game began to open up as each team started seeing scoring chances.

“Julia really had some amazing saves throughout the whole game,” Chugiak-Eagle River coach Brittney Hayden said of her only senior.

Akagi finished with 25 saves for her third shutout in four tournament games.

South-Dimond asserted itself in the last period, registering a 15-6 shot advantage, and in overtime, where it outgunned CER 10-5.

The last one of those shots came off Anzelini’s stick.

In the final minute of overtime, South-Bartlett had the puck deep in the CER zone when freshman defenseman Audra Schilling of South put a shot on net from inside the left faceoff circle. Woolsey was able to turn away the 36th shot she faced, but not the 37th.

Azelini was there to bang home the rebound, and South-Bartlett began celebrating another crown.

After the game, players stood at an appropriate social distance and applauded the efforts of their opponents by tapping their sticks on the ice instead of going through the traditional handshake line.

For many of the players, there are friendships in addition to respect. They play against each other in high school, but they are teammates on comp teams.

As the players were individually recognized in a postgame ceremony, shouts of “I love you!” followed by “I love you more!” could be heard loud and clear.

“In high school we get to play (against) players that we play with normally. It’s funny, because you know people so well that you could say that to them,” she said.

The opportunity to play for her high school is something Woolsey appreciates.

Bryce Akagi thinks the high school league helps forge friendships that might not be made otherwise. Most of his team’s players are South students, but they undoubtedly count Bartlett’s Anzelini as a friend after her game-winning goal.

“I love it when it’s an unexpected player that steps up big,” he said.

In the third-place game, Addy Gularte and Makayla Reimers scored goals for Dimond-West in a 2-1 win over Service-East. Alena Glover put the puck in the net for Service-East.

Zoie Campbell stopped 20 of 21 shots for the winners, and River Scott made 20 saves for Service-East.