An Eagle River man thought he had plenty of time to learn CPR. Then his wife collapsed in their yard. 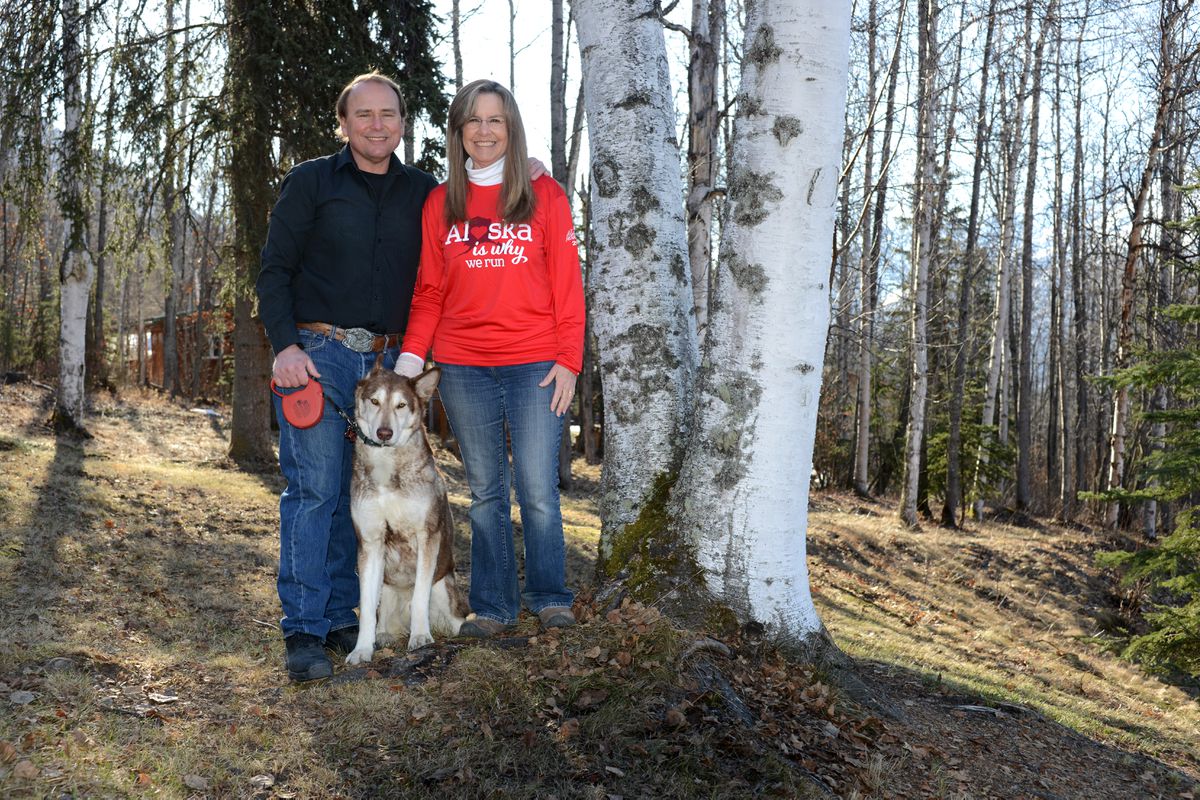 Keith and Jodi Herte and their dog Kiska pose in the yard of their Eagle River home at the spot Jodi suffered cardiac arrest in May of 2014.  (Erik Hill / Alaska Dispatch News)

Keith and Jodi Herte and their dog Kiska pose in the yard of their Eagle River home at the spot Jodi suffered cardiac arrest in May of 2014.  (Erik Hill / Alaska Dispatch News)

As a survivor of sudden cardiac arrest, Jodi Herte will wear a red hat Saturday when she participates in the Alaska Heart Run. It will go perfectly with the red cast on her right hand.

Herte broke her hand in two places Tuesday night while on a walk with her husband, Keith, and their dog, Kiska.

Keith thought he had Kiska's retractable leash locked but it turned out he didn't, because when Jodi decided to sprint up a hill, Kiska started running too and managed to trip Jodi, who broke her hand when she fell.

But neither man nor beast is in the doghouse. Kiska didn't do anything other than act like a dog, and Keith has a ginormous bank account of goodwill to draw upon.

Jodi wouldn't be here if it weren't for Keith.

She owes her life to the 12 minutes of lifesaving chest compressions he gave her three years ago when she collapsed from sudden cardiac arrest while she and Keith were raking the yard of their Eagle River home.

"When I first turned around I thought she was sleeping in the yard," Keith said. "I said, 'What are you doing, laying down in the sun?' She just looked so relaxed. She had the rake in her hand and she was laying there really peacefully.

"I shook her and she didn't wake up. I opened up her eyes. Being a hunter I know what dead animals look like, and that's what she looked like."

Keith called 911 on his cellphone. He was connected to an Anchorage Fire Department dispatcher who spent the next 12 minutes providing instruction and encouragement as Keith performed hands-only CPR. His efforts allowed Jodi's heart to keep pumping oxygenated blood to her organs until medics arrived.

‘I thought I had more time’

Jodi was 53 years old when she learned in 2006 she had dilated cardiomyopathy — an enlarged heart that doesn't pump blood efficiently.

She had lost both of her parents and her older brother to heart disease and was jolted by the diagnosis.

"It's one of those moments in your life where you think 'I don't want to die,' " she said. "I don't want these things to happen to me. What can I do? I'll do everything I can to keep it from happening to me."

"I thought we had plenty of time to learn CPR," Keith said. "I thought, 'This isn't going to affect us till we're in our 70s.' I thought I had a lot more time."

Then came the afternoon of May 4, 2014, when Jodi collapsed.

Ready or not, it was time for Keith to act.

Lisa Long is a registered nurse at the Alaska Heart and Vascular Institute. For 20 years, she has taught formal cardiopulmonary resuscitation classes that instruct people how to clear a person's airway then alternate chest compressions with mouth-to-mouth resuscitation — classic, textbook CPR.

The American Heart Association recommends the use of hands-only CPR by people who see an adult or teenager suddenly collapse.

[Hands-only CPR: Here's how and when to do it]

"The American Heart Association says chest compressions are probably the most important thing a bystander can do till the defibrillator gets there," Long said. "They don't need to be experts in CPR."

"People are afraid of making a mistake," Long said. "And they're afraid of hurting another person. So that fear and anxiety of the emergency maybe stuns us into doing nothing.

"But if they can learn the simple technique of doing compression, they can do something. And something is better than nothing. It can increase survival by 50 percent."

The key, she said, is to put both hands together and place the heel of the bottom hand in the middle of the person's chest. Lean over, keep your elbows straight, and start pushing hard and fast.

"You want to push at least 2 inches in depth on an adult, and at least 100 compressions per minute," Long said.

When Keith Herte called 911 the afternoon his wife collapsed, AFD dispatcher Frances Robinson played a metronome in the background that helped keep the recommended pace of the chest compressions.

After about three or four pushes, Keith heard one of Jodi's ribs crack.

"Don't worry about it," Robinson told him. "We can fix that."

Long was stunned to hear Keith administered compressions for 12 minutes.

"That's an enormous amount of time for one person to do that," she said. "We suggest that we switch every two minutes, because it is that exhausting."

Keith didn't have much choice. He and Jodi live on a large piece of property in the Eagle River valley and it took time for help to arrive.

"… The other thing I was thinking about was when all of this is said and done, when she wakes up, what kind of person is she going to be? Is she forever going to be in bed care? That kind of stuff was weighing on my mind when it comes to thinking, 'Am I doing the right thing? Should I be doing this?'

"It turned out pretty good."

When medics arrived, they continued giving Jodi hands-only CPR until they were able to regulate her heart with an AED, an automated external defibrillator. Responders shocked her heart three times before it regained its natural rhythm.

Jodi was taken to an Anchorage hospital, where her treatment included the installation of a pacemaker to defibrillate her heart if it arrests again.

Ninety percent of people who suffer sudden cardiac arrest while not in a hospital perish, Long said.

But five weeks after her sudden cardiac arrest, Jodi Herte was back at work as an administrative assistant at Wells Fargo.

Jodi doesn't remember anything that happened in the yard after she collapsed, but said she has moments when her brush with death roars into her consciousness.

"Decorating the Christmas tree, holding my grandkids, I'll think, 'I could be missing this,' '' she said.

"I really wasn't scared or didn't have a whole lot nervousness till after the EMT guys showed up. It's kind like being charged by a bear — during the experience you kind of react and then when it's over you think back and go, 'Whew,' '' he said, recalling the time he was charged by a bear while hunting in Kodiak.

Jodi recently retired from Wells Fargo but remains busy thanks to her involvement with AHA. She has shared her story on several occasions and helps demonstrate hands-only CPR at health fairs and other events.

She also stresses the importance of AEDs, portable devices used restore the rhythm of an stopped heart. Most cost $1,500 to $2,000, according to the heart association, and have voice prompts that simplify use.

"The big mission for me is I would like to see an AED in every workplace and every school," Jodi said. "They actually save lives. Keith could have done CPR all day, but it was not going to get my (heart) rhythm back. The shocking of my heart is what got my rhythm back."

Back to the hospital

Jodi ran her first Heart Run last year. She'll return Saturday, only this time she won't run. The doctor who is treating her broken hand told her to walk.

The injury required two visits to the doctor — one the day it happened, when a splint was placed on her hand, and another the next day, when a second fracture was discovered and the splint was replaced by a red cast.

Keith stayed by Jodi's side through it all, making sure she was OK.