It was quite a week for Marko Cheseto, who became a marathoner and an American in a 3-day span 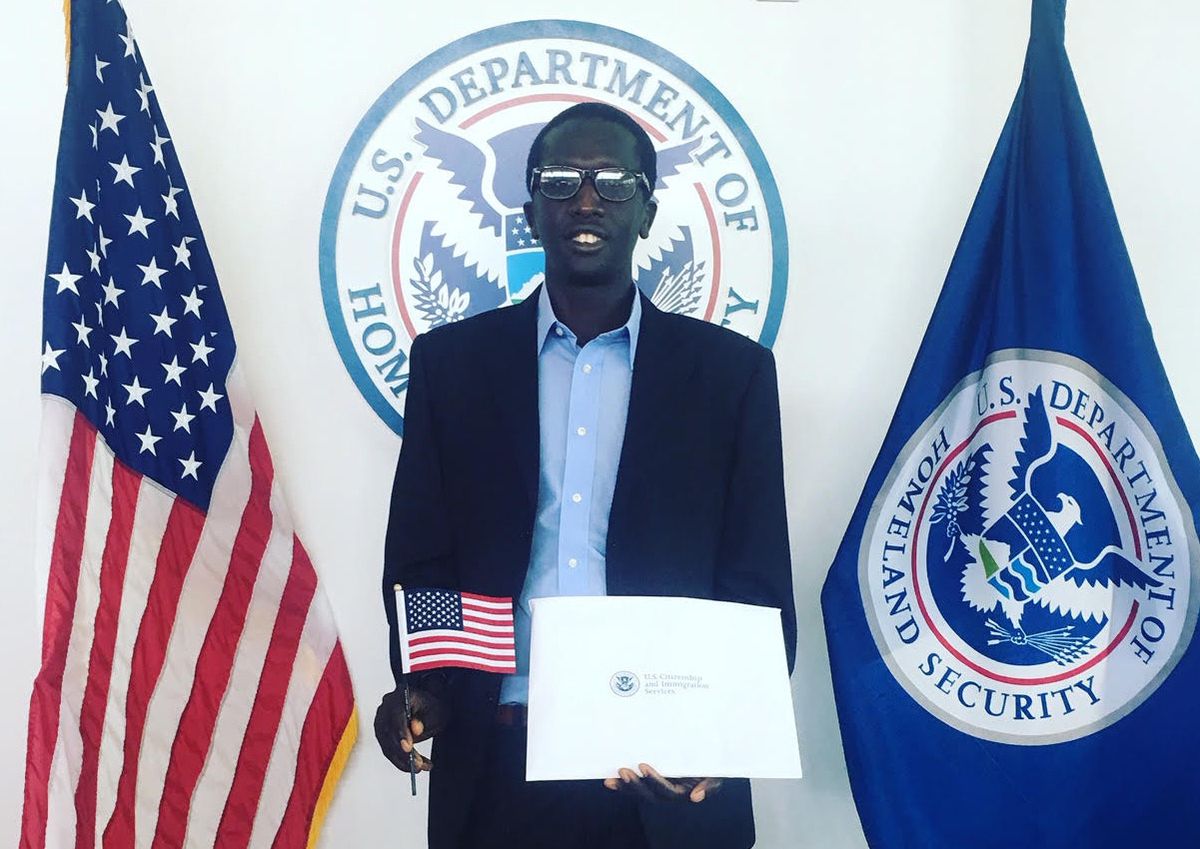 Marko Cheseto sends his love. As a marathoner, and as an American.

Cheseto, the former University of Alaska Anchorage runner from Kenya who lost both of his feet to frostbite in 2011, enjoyed two milestone moments in the past week.

Racing on carbon-fiber running blades, Cheseto ran his first marathon last Sunday in New York City. He finished in 2 hours, 52 minutes, 33 seconds — about 10 minutes off the world-best for a double-leg amputee.

"This is an emotional moment for me," Cheseto said by email from Orlando, Florida, his home since early this summer. "I have been longing for this. During the ceremony, I was extremely excited. America has offered me great opportunities to excel."

Cheseto, 35, came to Anchorage in 2008 on a UAA athletic scholarship. He quickly established himself as one of the program's all-time bests, earning NCAA Division II All-America honors six times in track and cross country.

In November 2011 of his senior year, despondent over the suicide of another UAA runner from Kenya, Cheseto overdosed on prescription pills and disappeared into the woods around the UAA campus.

He was the subject of a massive, two-day search during which it snowed more than a foot and temperatures dipped to single digits. On the third day he stumbled into a hotel near campus, his sneakers frozen to his feet. Both feet had to be amputated.

Cheseto remained in Anchorage, graduated with a degree in nutrition, got married and had three children. Eighteen months after losing his feet, he resumed running once he was fitted with a pair of running blades.

Early this summer, the Cheseto family moved to Orlando so Cheseto could work and train at Prosthetic & Orthotic Associates. He came back briefly in August to run the Anchorage RunFest half marathon, placing 10th in 1:26:55 (he still owns the Mayor's Half-Marathon record, a 1:07:47 set in 2010).

In his 26.2-mile debut at the New York City Marathon last week, Cheseto placed 613th overall in a field of nearly 53,000. He is believed to be the second person with two prosthetic feet to break the 3-hour mark in the marathon. The other, Richard Whitehead of Great Britain, owns the world's top marathon time for a double amputee — he ran 2:42:52 at the 2010 Chicago Marathon.

"I was happy with my time," Cheseto said. "My biggest challenge was going over the bridges, and sharp inclines. (It) is not an easy course running with blades, the last 0.2 was the hardest, after crossing Mile 26 mark, I was so ready to be done and I couldn't see the finish line."

He said one of his goals "is to run with elites in one of the major marathons." The time he's chasing? A sub-2:10.

Stan Patterson, the owner and head prosthetist at POA in Orlando, thinks that's an achievable goal.

"As you know, Marko is a natural runner," Patterson said by email. "The terrain of the NY Marathon course is hilly, which is more difficult for an amputee, and thus slows down the completion time. Our immediate plan for Marko is to enter him in marathons with flatter terrain and believe just that difference should get his time down to 2:38 or so — easily beating Whitehead's record.

"The ultimate goal is to break the overall world record and finish a marathon in less than 2 hours. We believe that Marko is the man to do it!"

The world record, set in September by Kenya's Eliud Kipchoge at the Berlin Marathon, is 2:01:39. Only nine people have run sub-2:04 marathons, according to Runners World.

Cheseto is hopeful that the marathon for lower-limb amputees will be added to the Paralympics, which currently offers a wheelchair marathon, but none for runners with prosthetics.

If the event is added while Cheseto is still competing, he'd get to race as part of Team USA, thanks to his recent change of citizenship.

Cheseto said he became a permanent U.S. resident in 2014. "I applied for citizenship while I was in Alaska, I in fact took my citizenship test in (the) Anchorage office back in May before moving to Florida," he said.

While Florida's weather is more conducive for year-round training, a big piece of Cheseto's heart is still up north.

"I love Alaska dearly," he said.